10 Best Nordic Sleeve Tattoo Ideas That Will Blow Your Mind! 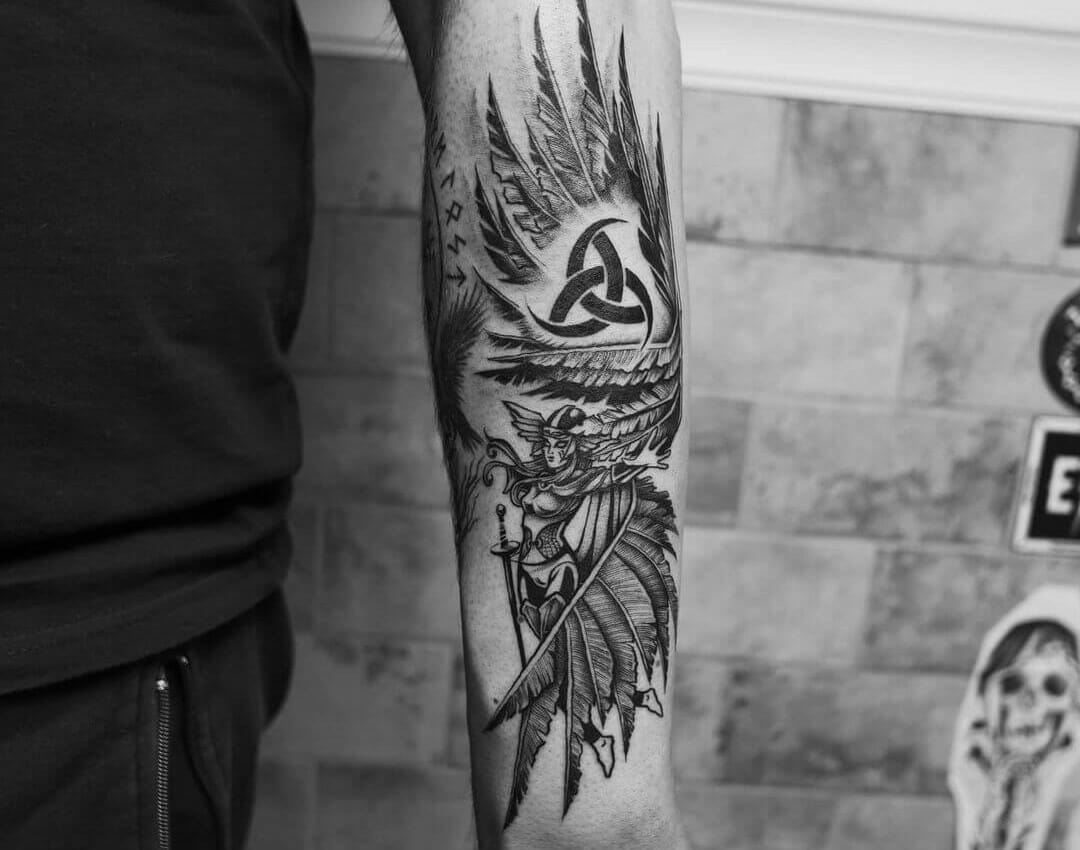 Obsessed with Norse culture? Wear your addiction on your sleeves literally. Check out these jaw-dropping Nordic sleeve tattoo ideas that’ll blow your mind!

Like Greek tattoos, Nordic or Viking tattoos are exceedingly popular among tattoo admirers.

Norse and Vikings are the same group of nomads who settled in Scandinavia (modern-day Denmark, Sweden, Norway) in the Early Middle Ages. A group of merchant-warriors shifted towards the eastern countries, like Russia and Ukraine. It is said by the researchers that the Vikings, especially the warriors used to cover their sleeves with heavily painted tattoos that highlighted their fierce and headstrong nature. It is needless to mention that the traditional Viking tattoos found their legacy way back to those Vikings. The Vikings gave natural elements, trees, and animals immense importance in their culture and often tattooed them on their bodies. Different mythical figures were a common pick that runs equally popular even in the present day. These Viking tattoos for men speak a lot about their personalities and men often choose these tattoos to boast about their characters. Nordic tattoos are generally large tattoos and take almost 6 to 7 hours based on the designs and few designs take nearly 20 hours to get tattooed properly. Let’s dive in to check out some breathtaking Viking tattoo ideas.

Topping this list of Nordic tattoo sleeve designs with a close shot of different Viking tattoos studded together in one sleeve this tattoo sleeve is beautifully adorned with typical Nordic motifs. Those black shadings are carefully guided by thin outline work and each symbol has its own mythical saga attached to it. You can add any Viking symbol to your tattoo and get your desired look!

Not everybody is a fan of hero and mighty look. There are some bad guys who know how to play it well. This Loki and World serpent Norse tattoo fits right in place to give you that bad boy image. Loki is a legendary Viking God known for creating chaos and the giant snake is Loki’s son, Jörmungandr. Jörmungandr is a symbol of both order and destruction. He is seen as encircling the earth by biting his own tail that represents the cycle of life. When he released his tail, Ragnarök came i.e destruction. The tattoo also comes with Loki’s other son, Fenrir, a giant wolf who kills Odin later. The raven stands as another messenger of destruction. If you are a fan of Loki and his family, what are you even wasting your time for? Rush to the studio!

Enriching this brave tattoo list with this tattoo studded with Norse symbols. This Viking tattoo has Odin’s followers in it, a pair of ravens and wolves. According to Norse mythology, the king of gods, Odin is followed by mythical twin ravens and two wolves named respectively, Huginn and Muninn and Geri and Freki. Huginn represents thoughts whereas Muninn represents memories. Again, Geri and Freki stand for chaos and destruction and on the other hand wisdom and bravery.

This Viking tattoo is a long artwork that stretches from chest to wrist of the wearer. Bold linework of Norse patterns with few dotworks in specific areas created the mythical art quite artistically that grabs people’s attention with ease. This one is a perfect choice for a man with a stern and strong personality.

This Nordic half sleeve tattoo is a cluster of different patterns and is perfect to fit in your well-maintained gym trained forearm. It contains Gungir, the magical spear of Odin and the Web of Wyrd, the matrix of fate along with the other Norse motifs. According to Viking myths, the Web of Wyrd is the proof that shows that one’s past always affects his/her presence.

Since Viking warriors were believed to wear big tattoos, this one qualifies as one of those tattoos. The tattoo artist did an amazing job inking this one. The all-black background lifts up the lighter outline. The dots give added volume to the outlook. Don’t think twice before getting it on your skin!

The Viking Compass, The Wolf And Odin Tattoo

Fenrir is a giant wolf from Norse mythology who is foretold to kill Odin, the king of Gods in a Viking saga. This long sleeve is proof that the wearer is a believer in destiny. The wildness of Fenrir in contrast to Odin’s wisdom doesn’t get overshadowed. The single raven symbolises the death of Odin. This realistic tattoo brings these mythical figures of Norse mythology together along with the Vegvisir. According to Viking mythology, Vegvisir is a compass with eight rune staves that leads people in the right direction in life.

The tattoo artist deserves good credit for bringing this extremely complicated portrayal into existence. The light shading created by dot work is bound to catch anybody’s eyes. The black shading beautifully created an attractive picture on the sleeve.

The Vegvisir And The Norse Motif Tattoo Design

The Vegvisir needs no further introduction. This attractive Viking tattoo design portraying the compass in the middle of typical Nordic patterns and runic letters stands for the owner’s choice for the right path. If you are a fan of Norse mythology, get this powerful outline tattoo done on your sleeve to spice up your tattoo game. The Vegvisir in the middle of this complicated Viking motif will also look good as a back or chest tattoo.

The main objective of the Vegvisir is to guide the Vikings in large seas and oceans. The tattoo shows the Vegvisir guiding a longship, that represents life, livelihood and sometimes even afterlife, amidst fierce storms. The Scandinavian ships were given peculiar long structures and the vibe of the ancient times is clear in this stunning tattoo. This Viking ship tattoo can be a symbol of guiding life in hard times too. Odin stands above all as the destiny and Valkyrie below as his associate who chooses who would be slain in battles. The storms and waves are drawn with utmost perfection. Optimistic people are easily drawn to such tattoos.

Viking tattoos always carry deep symbolism in their characters. The three interlocking knots of Viking God, Odin is called the Valknut, a modern name given to this symbol and it symbolises the knot of dead warriors. The term ‘Valknut’ is derived from ‘valr’ meaning ‘the dead warriors’ and the ‘knut’ meaning ‘knot’. This is also associated with war and God of war and death, preferably to the great Viking God, Odin. Above the triangles, the raven symbolises death and the predestined notion of destiny. The raven is also associated with the Great Odin.

This minutely detailed and distinguished tattoo reveals the owner’s strong personality and it is believed that he values valour and destiny.

When it comes to Viking sleeve tattoos, tattoos carrying several powerful Nordic symbols stand in the first row of people’s preferences. This tattoo owner left no space in his upper sleeve blank and included every possible shading to give the illustration a valiant look. Starting with Odin at the top, the tattoo descends down to the Viking warrior on the horse. The Viking Berserker tattoo too has been added to this tattoo sleeve that reminds us of the uncontrollable rage and fury of the Nordic warriors. The spear in his hand represents Odin’s valour.

Nordic tattoo sleeves require immensely talented artists and enormous patience and a relatively high tolerance for pain on the part of the wearers since sleeve tattoos need time. You can add any Norse symbols of your choice to make your own customised Nordic tattoo sleeve designs.

Here are some more Nordic sleeve tattoo designs for you. Happy inking!