10 Best Nordic Dragon Tattoo Ideas That Will Blow Your Mind! 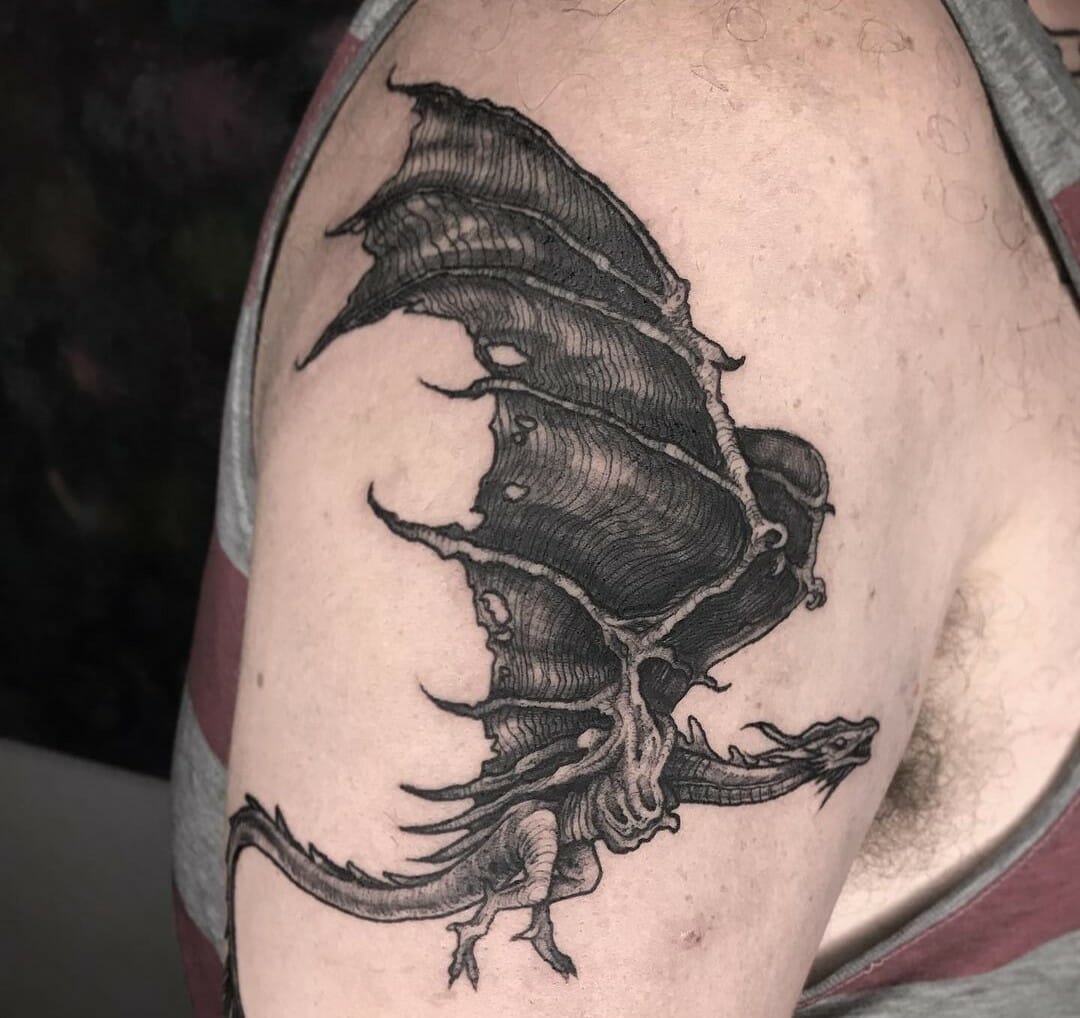 Want to express the power of your soul? Find the best nordic dragon tattoo from the list that we have prepared for you and go for it!

A tattoo of the nordic dragon has always been considered a symbol of violent power.

If you search a little bit about Viking tattoos and their mythology; you will come to know how they symbolised dragons with utmost destruction and devastation. Some of the best Viking tattoo designs have taken inspiration from the theme of dragons. Now, as here we are talking about the nordic dragon, the idea of itself brings some strong images to our mind right?

To paint nordic dragons in a tattoo is a very challenging task for any tattoo artist as it demands a lot of detailed works and hours of dedication. You can search Norse mythology to give some variations to your ink art. After all, everyone wants to be different!

So first we have here is a classic image of a nordic dragon, and the twist is there are two dragons. The advantage of this one is it will not occupy a lot of space be it on your arm and on your legs. Being one of the major symbols of Viking culture, a tattoo of a nordic dragon often takes up a lot of space. This is a monochrome tattoo and the battle shield-like shape of the tattoo gives you a warrior feel.

Now if we look into intricate the details of the tattoo, this Viking dragon looks like a painting on a Chinese lamp. It is so perfect that it is very difficult to find even one flaw in this one. If you want any other vibrant colour for the highlights then you can customise this design according to it. But remember one thing that the bold blad colour is what gives the tattoo its distinct character.

If you surf Norse tattoos or Viking tattoo ideas, you will see the key feature of these tattoos are found in their difficult designs and detailed patterns. In this one, you will find a similar essence. This one also is a monochrome themed tattoo with a lot of grains used to create shades of grey and black.

The design here not only includes the dragon that swirls around the leg but also has a little pirate to add to the theme of Viking ships and pirates. It looks like this Norse tattoo tells us a story of a pirate who uses a dragon instead of a Viking ship to spread his terror. The pattern of the tattoo, if you look closely to find out that it can be a hand poked tattoo. The grains and the lines have been perfectly inked by the artist to flaunt this beautiful Viking tattoo design.

You may wonder why is this one on our list, that too in the third space. Well, if you do wish to include some other elements from Viking culture or other elements. The overall tattoo is a big mask-like structure which altogether may look a little scary. The tattoo has two dragons in it if you look closely and the whole tattoo is like a big maze where at every corner you will find elements of Norse mythology.

This full-sized tattoo will truly show your fashion statement also the powerful side of your personality. This tattoo art carries with it a very strong essence of Chinese dragons. Those who often appear in the comics and other cartoons also.

Now this one here is a bit different from the other tattoos we have seen. As you searching for tattoos of the nordic dragon, a Norse legend, this one may look all too much alive than being a character from Viking lore. The tattoo is a full-sized portrait of a dragon, with no harming the gore and destructive attitude of it. This one is a graphic image that also looks like a 3D Norse imagery of the dragon.

It is true that Viking tattoos are mostly based on their mythology and Norse gods. This one here has a similar effect but the torn wings and shades of the body make it too alive and transport you back to a scene, Harry Potter and his friends fighting deadly dragons.

Again we have a larger than life masterpiece and this one has been fully based on the grains. The colour of the tattoo which is basically black appears to be more bold and prominent. There are different Viking symbols that have been incorporated into the full canvas. Now the question is, where is the dragon?

The dragon is playing hide and seek with us amidst the vast space of this Norse culture themed tattoo. Look closely into the blank portion and a silhouette of the creature will be formed in front of your eyes. The whiskers and the body shape has been very interestingly incorporated into the design. We must applaud the artist as he or she does not allow this large piece to appeal at its every inch.

Tired of the greyscale and the monochrome? Chill, as here we have something different on the platter. This tattoo gives you the idea to build your next in the art using different shades of your choice. The intricate and interestingly twisted designs are still present in this one. What is complementary is a kind of framework that tightly binds the entire theme together.

You will get to see different Viking symbols that have been included in the design, specifically in the body of the deadly beast. The twists and swirls of the creature have been outlined using blank lines after filling the body densely using the beautiful and vibrant red ink. You can also include a Viking compass into the design to try something a bit different. Altogether this one can be a beautiful option to go ahead with.

Dragon With A Twist

Now this one is what we have for those who are looking for a design that will be simple yet impactful in appearance. Viking tattoos are in a way very much into symbols and other mythological aspects. This tattoo is more about the detailed artwork and Viking mythology coming into juncture to prosper into a mind-blowing art piece.

The lines are very prominent and have been done with utmost patience. The simplicity of the tattoo does not tamper with the theme it deals with, rather than that it enhances it. This one can be flaunted on your forearm and even on your chest with a tiny bit of touch of colours.

Ink With A Message

While looking for Viking gods and symbol for your tattoo that looks fabulous on your sleeve and which can be mixed with the nordic deadly creature, this one would have surely come to your notice. There is a fine touch of mechanism amidst the aspects of Norse mythology ideas implemented into your tattoo.

This artist has taken the suggestion to incorporate symbols of Viking mythology too seriously as he or she has created a different space reserved in the whole piece. Among all the other Viking tattoos that you will be looking into, this one may simply stand apart for its unique structure.

As you can see in the post, there are two pictures of the tattoo. The first one is rough work and the second one is the outcome of a brilliant artist. Again you get to explore and play with different aspects of Viking designs. The tattoo is tightly packed with intense inkwork. However, here the symbol works as ornamentation tokens for the dragon’s body. The fierce eyes and the curves of the body have been put exactly as it has been depicted in many tales and folklore.

Your choice for the body art has to be the best one because a tattoo is going to be there with you. This one would also satisfy your wish to get a stylish full sleeve tattoo.

The last one has got a major twist and you already know it if have looked into the picture. It is the captivating eyes of the beast. Those bright cyan coloured eyes on both the dragons are the game-changer. The artist knows how to create an eye-catching spot thus he has carved the whole ink art using black ink. Now as per your preferences you can go for any of the colours that you will think will look best on your Viking tattoo. The Norse culture is a very attractive and enticing subject to choose for a tattoo. The topic is so famous among tattoo lovers that while your search, even if you spell wrong words liNorseorse tatoo’ or ‘dragon tatoo’, then also the internet will land you on the right page.

Now your search may have been completed as you have chosen from the fabulous collection of nordic Viking dragon tattoo lists that we have prepared for you. Even if you haven’t then you can go and explore more. There is no harm in keeping open to other options.