10 Best Noose Tattoo Ideas You Have To See To Believe! 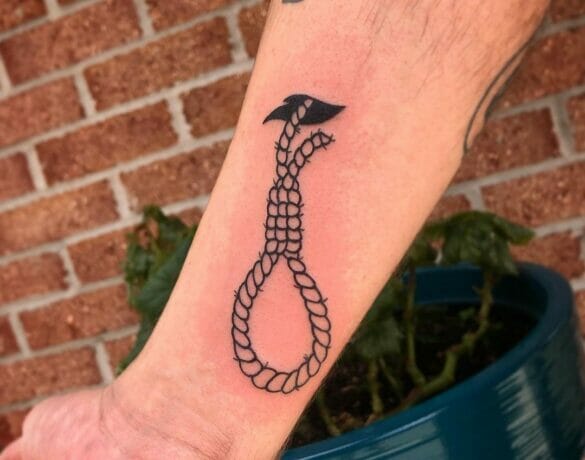 Are you looking for a good noose tattoo? Then look no further as we have brought you the best noose tattoos in the list below.

The noose tattoo sits right beside the skull tattoo as the most famous dark symbol as dark tattoos.

Noose tattoos are very famous as a prison tattoos. It has an extra meaning steeped in American history.

It’s part of a very dark time when many African Americans were killed just for their body colour. Unfortunately, to this day, white supremacists get these tattoos mainly with a confederate flag at a visible part of their body to make their racism clear. Another noose meaning is if you see a person wearing this tattoo, specifically a tattoo of a noose wrapped around someone’s neck, then that might be a prison tattoo and the person is awaiting their hanging executions. It might also mean the person has suicidal thoughts. Even though they have so many associations with dark symbolism, there are a few examples, where the noose tattoo meanings are positive, like sometimes the noose represents that they are aware of the concept of death and they live their life to the fullest. It can also stand for solidarity for suicide victims. Read on and get to know more about noose tattoos.

American traditional tattoos have a long history and it’s probably one of the oldest styles of tattoo designs in the country. A man named Sailor Jerry or Norman Collins invented the style by learning from Japanese tattoo masters. He mixed vivid colours, bold lines, and simple drawings to come up with a style that has lasted decades. Even now, many people get into a tattoo shop to just get these tattoos. The picture above is of a classic traditional tattoo of probably the Grim Reaper holding a noose and scenery of a beautiful sunset by the beach with a palm tree inside the noose can be seen. This design of a Grim Reaper holding a noose is one of the most common noose tattoo designs.

Tattoo artists around the country have improved upon the traditional tattoos over the years and they have come up with neo-traditional tattoos, which use similar bold lines and vibrant colours of a traditional tattoo, but they throw out the no-shading rule. They have introduced a minimal amount of shading to give the tattoos that little bit of liveliness, as evident from the picture above. It’s a neo-traditional noose heart tattoo with skeletal fingers and a skull trying to come out of the heart noose and a few spider webs around the noose. The shading work of the tattoo with the red accents is surely remarkable.

Black and grey tattoos are probably as old as traditional tattoos. They became popular after the Chicano movement and Chicano art movement of the Mexican-American people of culture. Chicano tattoos gave birth to black and grey tattoos, and realistic tattoos. Since then, it still remains a largely popular choice of a lot of people around the world. Additionally, some designs just look the best in grey and black ink, like a skull or the nightlife. The picture above includes two tattoos. The one on the left is of a black and grey heart noose tattoo. It’s a simple yet elegant design.

Some people tend to get full body art large tattoos, while some get a small tattoo. There are also some people who fill their bodies with small tattoos, so it makes sense how popular small tattoos are. Usually, these tattoos are simple and typically outlined with no shading yet they have the ability to hold deep and complex meanings. They can be both classy or childishly fun. One thing is for sure, you can have fun experimenting with the design of your small tattoo. The picture above is of a simple enough small tattoo inked on the side of the wearer’s one ear. There’s also a small star inside the noose.

Noose tattoos already have a negative meaning. While a large number of people get these tattoos just because it’s a popular design, many tattoo enthusiasts or tattoo lovers have a better understanding of the deep meaning that the tattoo holds. If you know the meaning and choose this design to ink in a scary manner that strikes fear, then you have full advantage to make it look scary, like the picture above. It’s a noose tattoo with a skeletal hand holding the rope. It can serve as just a scary tattoo and the meaning that you are not afraid of death however scary it might be. You can add a little shadow or smoke around to make it scarier.

One of the few noose tattoo designs that hold a positive meaning is the noose depicted with a heart shape. It’s also one of the most recognized knot designs or hangman’s knot designs out there. The unbreakable knot of the hangman’s noose represents that in this crazy world, you have an unbreakable bond of love that even death can’t defeat. The hangman’s knot represents a positive thing in this tattoo. The picture above is just one form of the noose heart tattoo, specifically a traditional tattoo, where just the rope of the noose is forming the unique shape of a heart. There are different variations where you can include the names or faces of your loved ones in the heart.

Noose tattoos are already the most famous dark symbol that shatters all societal norms, so you might think that I’ll just add a skull tattoo in the mix. The skull is another pretty iconic design of dark tattoos and a powerful symbol that also holds controversies. Well, the surprise is, the skull’s role in the combination of the two tattoos can actually be a symbolism of something positive, like ‘death will come for me, but I’m not afraid and I’ll live my life to the fullest.’ It’s also worth noting that the skull’s role in the combined design can also indicate a darker symbolism and all the things negative like guaranteed death or something that strikes fear, but that depends on the wearer a lot. The picture above is of a traditional tattoo of a skull with some leaves around it, the red colour on the background, some drops of red blood, and a noose tattoo etched on the skull.

Noose Around A Bird Tattoo

Different species of bird tattoos have a specific meaning, like owl tattoos are a symbol of hope, wisdom, vision, and magic, while sparrow tattoos are the symbolism of true love, journey, and humility. However, all bird tattoos, in general, are a symbol of freedom in life. Hence, a tattoo of a noose around a bird might mean the wearer believes that the freedom in their life is dead. The picture above is of a hawk tattoo with a noose around it, but it’s showing a scenario where the bird is not staying bound because of the noose. That might represent that the wearer is rising up, taking back their freedom after a struggle.

Similar to birds, every different flower tattoo has its own meaning, like the rose is a symbol of love, friendship, and other human bonds, while orchids are a symbolism of beauty, fertility, strength, and perfection in balance. However, all flower tattoos give any tattoo a softer touch. If a tattoo has both positive and negative connotations, like a skull, or a noose tattoo, including a flower, helps you express the positive meaning of the tattoo. The picture above is of a black and grey tattoo of three black flowers, specifically sunflowers and a noose hanging from the flowers. Additionally, flower tattoos is black and grey like this can help you stand out.

Eye tattoos have different meanings, like the symbolism includes vision, ambition, or having a purpose in life. It can also be a symbol of something religious and represent the eye of God watching over us guiding us. Hence, a tattoo like the picture above can be a symbol of the death of all the things mentioned. It’s a beautiful tattoo of a tearful eye in the middle of a noose with little spider webs. A spider below and a rose above the noose tattoo can also be seen. Tattoos like these might represent that the wearer’s faith has died or they have lost their feeling and sense of purpose, ambition, or vision.

You have already learnt what is a noose or the noose definition. One of the most recognized knot tattoos designs is the sailor’s knot, but the hangman’s knot is not far behind. Here are a few more suggestions you can follow for your noose tattoo that has a positive meaning –

Still looking for inspiration, then checkout this blog post about Skeleton Hand Tattoo.