10 Best Ninja Turtle Tattoo Ideas That Will Blow Your Mind! 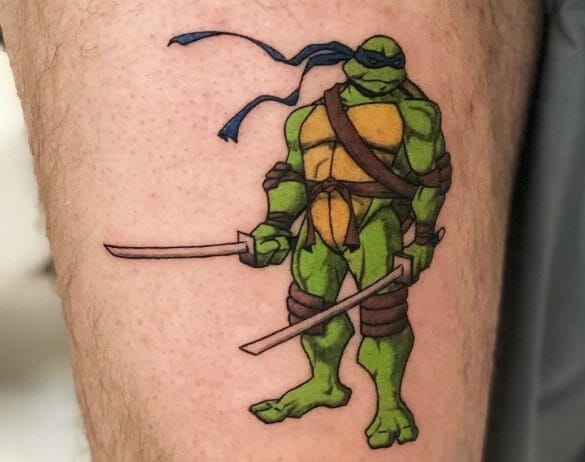 Cowabunga! If you are on a hunt for some of the coolest ninja turtle tattoo designs then here’s the perfect list for you. Search through it already!

One of the most popular comic books and cartoon series, ninja turtles are widely recognizable characters.

The TMNT tattoos , inspired from the famous cartoon characters fall among the favourite ideas for body art. Because these beloved cartoon characters are not only extremely cool to flaunt but they also have underlying meanings if we search it on.

Ninja Turtle tattoos have given some stellar ideas and good body art can always enhance the fun in life. Ninja turtles are often regarded to be recognizable heroes in their own way. The four teenage mutant Ninja turtles are Leonardo, Michelangelo, Donatello and Raphael who are ninja brothers trained to safeguard the city of New York after they got mutated post radioactivity. This began the journey of fighting crimes and alien invasions. Fun fact, they are actually named after the Renaissance artists. These four, cool warrior brothers are inherently a sign of loyalty, diligence, determination, intelligence, compassion and ofcourse a lot of adventure but each of them represent particular attributes. Hence for these temporary tattoos of teenage mutant Ninja turtles, it is best to find what one recognises with , the most and get inked with it.

If one is looking for temporary tattoos based on fictional and beloved cartoon characters, the classic form of it is always the face of the most recognizable one. It is simple, straightforward and in this case, is a happy face of the teenage mutant Ninja turtle. Also, this face of the ninja turtle here signifies friendliness and compassion in a cute demeanour. Thereby it is an easy tattoo to relate to.

For the characters to be accentuated in tattoos, no need to search for anything else but straight away go for an illustrative Ninja turtle tattoo. Beloved cartoon characters are often loved for the ideas of warmth and happy go lucky that comes with it but comics like if a Ninja Turtle has a streak of aggression and war to it hence to showcase each of the emotions in storage at each of the turning points, one can go through different sites and get their hands on illustrative tattoos.

Ninja Turtle Tattoo But In Popsicles

Being the face of friendliness, dedication and courage, Teenage mutant Ninja turtles are popular all over. So these ideas are often attached to tattoos of this sort. But to add a bit of quirk to the usual is where the fun begins. A Ninja Turtle is adventurous by nature and no one has a different comment to that but to alleviate the fun factor to it, in reference to this, imagine an expression of the ninja turtles but on the palm of Leonardo or Raphael or Donatello or Michelangelo. Sounds quirky isn’t it? So get on with such tattoos already.

Creative, exuberant and always active, this teenage mutant ninja is the heart of the phenomena of Teenage mutant Ninja Turtles. The smallest Ninja Turtle but also the fastest, this turtle is celebrated worldwide especially by the fans.

Hence this character for ninja turtles tattoo designs are a very popular choice amongst the fans of ninja turtle tattoos.

It is no secret that each of the ninja turtle is trained to be a warrior. So a special sword is a must as it is a sign of heroism. But one of the most famous weapon is the sais of Raphael. It is a 16 inches long blade and is the perfect combination of badass and courage for ninja turtle tattoos. Of course, to flaunt a sword tattoo inspired by the teenage mutant Ninja turtles is definitely comes under the marvelous tattoo ideas.

Smart and witty, the turtle is teenage mutant Ninja Turtle everyone would love to be in their group. With the right dose of sarcasm and ferociousness,ninja turtle tattoo designs based on this lad are a big hit in this fandom. The red turtle is aggressive and a true hot headed warrior in all the sense.

For the better shading and structure of the face or the whole posture of one of the teenage mutant Ninja turtles, ninja turtle tattoos are best suited on the arm sleeve. With the proper space to work with, the tattoo will be more attractive and will bring forth a comment or more for sure from the other people, perhaps may even act as an inspiration for their tattoos.

A flash work tattoo is basically the kind of tattoos that displayed on the tattoo parlours if we search on it. But on body parts, the flashwork tattoo is a smudgier version. It is mystic, artistic and has a dark aesthetic to it. This is quite a fun tattoo to go for.

Like all of us, teenage mutant Ninja turtles love pizza too. And what is better than clubbing your favourite food with your favourite fictional character together? We believe, most of the things are not. Cutting a pizza with one of the world’s most popular cuisine with a knife. How cool is that? Just go for it if you like your food and adventure together.

These characters have made a way into the hearts of several people. It is hardly anyone in sight who flaunts one of these ninja turtles and does not get other people to comment on it and search for the site from where a link to one of these tattoos is available. The recognizable Teenage mutant Ninja turtle came into being in the 1980s but even today, they are cherished all over the world especially by their loyal fan base, their fandom also being known as ” Turtlemania “. The movies are still a major hit and the ninja turtle tattoos designs simply never run out of style.

For more ninja turtle tattoo designs, the following ideas can also be referred to these