101 Best Nightmare On Elm Street Tattoo Ideas That Will Blow Your Mind! 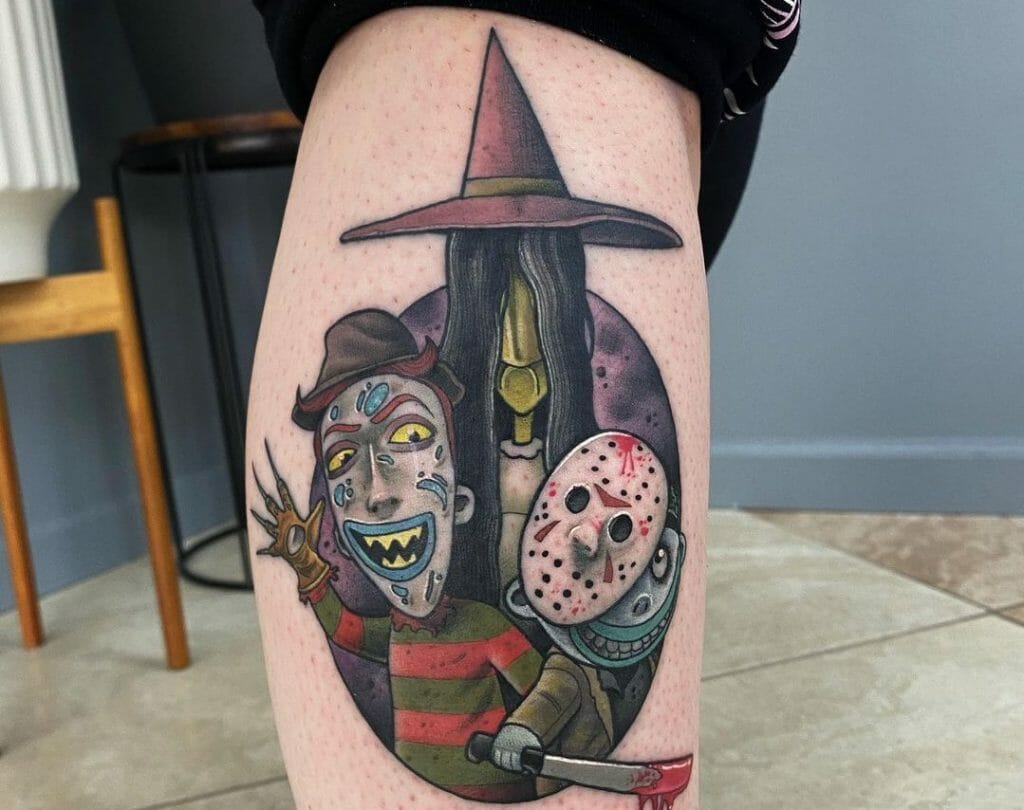 Freddy Kreuger dreams can come true for you too unless you′ve these cool tattoos of the villain tattooed on you. Just kidding.

The killer franchise, created by the “Master of Horror,” Wes Craven, released seven pictures over the course of a decade.

Wes Craven named the character Freddy Krueger after a child who bullied him in school, rather ideal for someone who bullied the people in their dreams. In the Nightmare on Elm Street franchise, Krueger killed children in Springwood, Ohio. A fictional town. Later on, due to some mistake, he was released from police custody. However, the parents of the children who were murdered decided to take justice into their own hands and killed Freddy Krueger by burning him alive.

Hence, it started the long horrifying legend of Krueger′s spirits haunting the dreams of the children and killing them, which resulted in their real-life deaths.

The more films were released, the more backstories were introduced and the killing got more creative for Krueger.

For horror fans, Nightmare on Elm Street is one of the most popular franchises ever created and their devotion extends to the point of people wanting to get Freddy Kreuger inspired tattoos.

Yes, it is a rather questionable choice but once you take a look at some of these art pieces, you′ll understand the devotion to getting a Nightmare on Elm Street Tattoo.

The iconic bathtub scene from the 1984 movie is one of the scariest scenes from the horror franchise and to date, many of us are scared to take baths, expecting a razor-gloved hand to pop up from under the sudsy water.

This iconic scene is captured in this tattoo, framed with a heart shape. An animated version of the scene has been replicated with vivid colours like blues and several other colours for the bubbles. It′s a perfect depiction of the scene and ideal for those who prefer a small version of the nightmare on elm street tattoo.

Here we see a portrait-like version of Freddy Krueger, our ultimate antagonist of the nightmare on elm street tattoo and of course, the franchise.

It just isn′t a night on the elm street tattoo collection without a Freddy Krueger tattoo. So we′ve added this cartoon-ish and sinister-looking Kreuger with his razor-gloved hands.

Speaking of Freddy Krueger′s razor-gloved hands, we′ve this neo-traditional artwork of the signature weapon the dream demon used to kill his victims.

It also features a rose motif, with the gloved hand wrapped around it and the words “sweet dreams”. Though we′ll be having anything but sweet dreams, this art piece will not disappoint you, just like the entire slasher franchise.

This colour realism nightmare on elm street art piece is for those who appreciate a large and bold style of tattoo because this one is the real deal with its realistic-looking Freddy Kreuger.

If you are inspired by such tattoos then we′d definitely suggest you opt for this particular piece. It also features the infamous Jason Vorhees from the movie Friday The 13th, giving you the best of both worlds.

And, we also hope you don′t give yourself a massive fright every time you look at a mirror.

So, of course, we found a tattoo with the famous catchphrase and together with the razor-blade gloves, this tattoo is a real piece of horror and we are sure it′ll definitely appeal to the horror buff in you.

Nightmare On Elm Street With Other Slasher Movies Tattoo

This tattoo is every horror movie enthusiasts′ dream. Together with Krueger′s razor-gloved hand, the tattoo also features the signature weapons of some of the most notorious horror movie characters of all time.

From IT movie′s Pennywise and his red balloon to Friday The 13th Jason Vorhees′ mask. There′s weapons from the movie The Shining as well as the Chainsaw from The Chainsaw Massacre. Together they form the words ‘love’

This beautiful piece (quite possibly the only piece in this collection that we can actually call beautiful) features a silhouette of Freddy Krueger razor-gloved hand, inside which the artist made a dark starry night and a street, a reference to elm street.

It is a vivid and simple artwork and ideal for those who are looking to commemorate the movie and the character.

This sleek stencil piece is another must-have and features Freddy Kreuger′s razor-blade hand with the words “In Your Dreams” featuring in the scary piece. Tattoo enthusiasts love stencil pieces and they are currently one of the most popular choices.

Their neat and clean and meticulously done work is a massive hit among the tattoo community.

Here, too, the stencilled hand has a neat look making it a trendy choice for horror movies and tattoo buffs.

Nightmare On Elm Street With Friday The 13th Tattoo

This Nightmare On Elm Street piece will give you anything but a nightmare. It′s quite possibly the cutest of them all and features Freddy Kreuger and Jason Vorhees. While they are made to look sinister and dangerous, the fact that they are drawn in mini versions gives them a rather cute look.

They are drawn with thin lines and has no colours other than black. Simple and sweet. Though sweet is the last word we′d associate with two of the most notorious slasher killers of all time.

Lastly, we′ve a portrait piece with a ripped-flesh motif. That probably makes the tattoo scarier than it should however, the 3-D look is also one of the coolest features for tattoos.

The tattoo has such a realistic look, with every detail, like Kreuger′s burnt face highlighted meticulously and his vengeful look has been captured pretty accurately.

If this doesn′t give you a might fright, then nothing will.

Horror films are indeed a part of growing up and a time-honoured method of exorcising one′s personal demons; in the domain of dread, our troubles look insignificant. Freddy Krueger′s iconic red and green striped sweater, even Screams ghastly mask all inspire the euphoric horror we love to feel while recreating the emblems of our fears.

We explored some of the coolest tattoo ideas from one among many iconic horror movies while the list also features a few others like Jason Vorhees and the signature weapons of some of the most notorious killers. Together, they are inspiring horror movie buffs to get tattooed and permanently mark their love for the genre.

What inspired you to get a Nightmare on Elm Street tattoo?

What is the meaning behind the Nightmare on Elm Street tattoo?

For me, the meaning behind the Nightmare on Elm Street tattoo is twofold. First and foremost, it is a tribute to one of my all-time favorite horror movie franchises. Secondly, it is also a reminder to always be careful of what you wish for because you just might get it.

How do I care for my Nightmare on Elm Street tattoo?

As with all tattoos, it is important to properly care for your Nightmare on Elm Street tattoo in order to ensure that it heals properly and lasts for years to come. Be sure to follow your artist’s aftercare instructions carefully, and if you have any questions or concerns, don’t hesitate to reach out to them.