10 Best Night Sky Tattoo Ideas You Have To See To Believe! 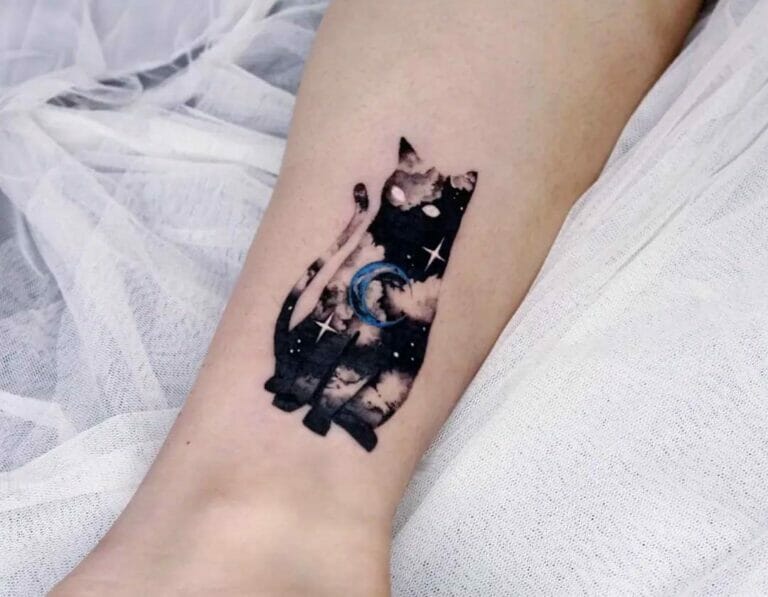 Nightlife, especially the night sky, has a certain beauty to it.

It holds the mystery of the space beyond the earth. Then it opens that mystery to us to enjoy and absorb during nighttime.

Night sky tattoos are best for people who can appreciate the beauty of the night. It usually doesn’t have any deep symbolism of its own other than the various meanings all the elements of the night sky individually have. However, night sky tattoos can be worth it. Nyctophiles, especially, will understand what we’re talking about, but everyone will love the amazing night sky tattoos for men and women below, so keep reading.

Watercolour tattoo ideas are a relatively new style of tattoo art, but they have taken the world by storm. It’s become extremely popular. The subtle fading of the colours in this style creates an effect of watercolour painting etched on your body, as evident from the picture above. It’s an awesome tattoo design of a picture of the night on the hills in a triangle border. The sky is painted with blue, yellow, and green watercolour, and it’s oozing out of the triangle.

Nature holds a different kind of enigmatic beauty during the night, especially when the night sky looks infinite, holding all its mysteries. That’s why landscape tattoos for men and women, including the night sky, like the picture above, can be a great choice. It’s a dotwork night sky tattoo sleeve of a knife with a part of its handle visible. A serene picture of the night sky with even a constellation on the right in a desert is seen on the knife.

A moon tattoo, whether it’s of a full moon or a crescent moon, has many different meanings in many different cultures. It can represent creativity and growth along with fertility and motherhood. Also, you can’t paint a night sky without adding a moon, like a picture above. It’s an awesome tattoo of a girl looking up at the dark blue night sky with a crescent moon and some planets here and there tattooed in an animated style.

We don’t think anyone can resist a night sky full of thousands of stars twinkling down at them. That’s why it’s kind of mandatory that you include the beautiful stars when you ink a tattoo of the night sky. Star tattoos for men and women have many meanings, like guidance, hope, desire, ambition, intuition, honour, and many more. The picture above is of a woman donning a night sky sleeve tattoo with many stars around it.

Cloud tattoos for men and women have some negative meanings, like misfortune or bad luck, especially if it’s rain or thunder cloud tattoos. However, they also represent resilience, overcoming hard times, and personal growth. In addition, little clouds in the night sky, like the picture above, can look glorious. This cloud sleeve tattoo is done gorgeously with two black stripes making the top and bottom borders with a picture of a full moon and some clouds around it. The small man falling is surely giving it a fictional vibe.

You don’t have to believe in astrology to appreciate the beauty of constellations. Even scientists use them for mapping out the great unknown of space. You can choose any of the 88 constellations to tattoo, and if you believe in astrology, then the choice is easier. Like, the picture above is a tattoo of the Scorpius constellation with the element of an outline tattoo of a whale. Streaks of blue watercolour going through the design are surely giving it the vibe of the night sky.

Many animals are symbolism of the night, and owls are one of them. Owls depict the nightlife so well that countless movies and shows have used their calls to portray the nighttime. Hence, including an owl in your night sky tattoos can be brilliant, like the tattoo on the picture above where some clouds are seen floating in the night sky at the top of the design, above the head of the owl. Additionally, owl tattoos represent wisdom, hope, magic, vision, and more things.

Along with owls, foxes, wolves, or bats are some other animals that have become almost synonymous with nighttime. Hence, a tattoo of the night sky with some drawings of landscape within a frame in the shape of a fox head, like the picture above, can seem pretty perfect. As a bonus, fox tattoos symbolize intelligence, cunning, wisdom, beauty, fertility, resilience, and more. Get inspiration and include a wolf or a bat when you ink your next night sky sleeve tattoos.

The night sky we see is a sight of the space that lies beyond our earth. It is full of planets, comets, asteroids, and more that are as beautiful as the night sky. Numerous shows and movies, like Star Wars, Doctor Who, and more, have depicted space in them. You can use any scenes or elements from them to ink a night sky space tattoo like the picture above is a tattoo of space with a Star Wars robot, BB-8 in it.

Now you have ideas on what night sky tattoos can be best for you and what they represent. Here are a few more suggestions that you can try –

Sleeve tattoos of the night sky by including a large part of the sky, even the constellations.

Full body art of a night sky of space with all the planets, comets, asteroids, and more.

Now, take inspiration from these and get inking your favourite tattoos.