10 Best Night In The Woods Tattoo Ideas You Have To See To Believe! 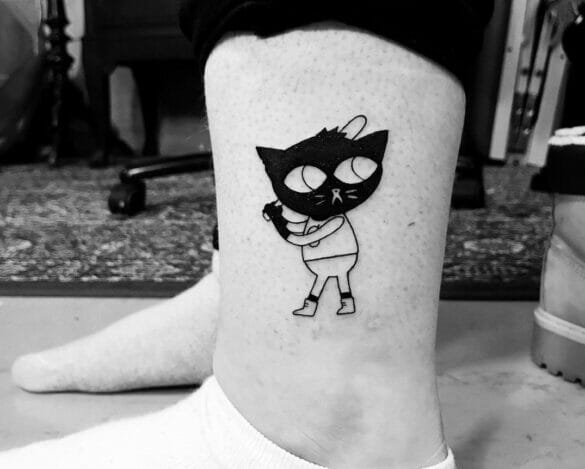 Night In The Woods is a story-based adventure video game.

Users around the world usually find the plot, artwork, and characters extremely well-written and drawn by the author. The story revolves around the life of a young woman, Mae, and a couple of her friends.

You can visit and explore Possum Springs, which is the hometown of the main character. Remember to hang out with the friends of the main character as you control her life. The more you visit, talk or hang around then, the more you progress into the game. You can find more supplementary games, extended versions, like ‘Weird Autumn’, which is an extra director’s cut version on the internet, so more ideas can be found for your Night In The Woods tattoo.

Night In The Woods Game Tattoo

Night In The Woods surely provides an interesting story, and the work of art in the game caught the eyes of many people around the world when it launched in the beginning. You have many scenes and stuff from the game that you have enjoyed that can be your options to get a tattoo, like a scene that includes ‘nuke Possum Springs’ or the picture above. It’s a Night In The Woods small wrist tattoo of the protagonist of the video game, Mae Borowski, with a dagger in her hand saying ‘crimes’. Whenever she did any mischievous things with her friends, Gregg and Casey, they called it ‘crimes’.

Night In The Woods ‘Witchdaggah’ Tattoo

The second chapter of the game includes the Halloween event. In this, even the protagonist, Mae Borowski, will dress up as a witch with a dagger through her witch hat for the day of Halloween. The costume has become widely popular among users around the world, and people call the costume ‘witchdagger’ or ‘witchdaggah’. The picture given is that of a tattoo of Mae’s head with the ‘witchdagger’ hat and the words ‘nightmare eyes’ written below it. ‘Nightmare eyes’ is a name she gave herself owing to the fact that she keeps having nightmares.

Night In The Woods Mae Tattoo

Margaret ‘Mae’ Borowski is the main protagonist of the video game. She is 20 years old who dropped out of college and suffers from mental health issues, like anger issues, depression, and dissociation. She comes back to town after dropping out of college and starts experiencing paranormal things in her hometown. The game follows her journey. The picture above is of a Mae Borowski tattoo in her ‘witchdagger’ costume and the words ‘let’s die anywhere else’ higher above the tattoo, which is a song written by her and her friends.

Night In The Woods Bae Tattoo

Beatrice ‘Bea’ Santello is the best friend of Mae from her high school days. She is the drummer of Bae’s band. She has a bit cold, a realist, and a gloomy personality owing to the numerous tough things she has gone through within a very short amount of time. Her friendship with Mae is rocky but improves much more as the game progresses. The picture above is a Bea Santello tattoo in her most familiar attire and form. She is smoking a cigarette, and a few burned-out ones are scattered below.

Night In The Woods Lori Tattoo

Lori Meyers is a teenager and resident of Possum Springs. She is a little awkward with morbid thoughts on occasion. She has a macabre fascination with sleeping in the woods or in the basement, and she has thoughts of murder and more such things. She has low self-esteem, but Mae finds her normal. The picture above is of a beautiful Lori Meyers tattoo in black and grey ink with some leaves flying by her in the wind. The shading work in the tattoo is done beautifully.

Night In The Woods Gregg Tattoo

Greggory ‘Gregg’ Lee is Mae’s best friend and lives in Possum Springs. He has a rebellious and extroverted personality, probably with a little bipolarity and poor impulse control. He is still caring about his friends and boyfriend, Angus. Like every other character of Possum Springs, he has had a difficult past. The picture above is a small Gregg Night In The Woods tattoo of just his head with some stars around and the word ‘crimes’ written below. He, May, and Casey made trouble and called it ‘crimes’ and hence the quote.

Night In The Woods Quotes Tattoo

The characters of the video games have deep backgrounds. Some are teenagers, and some are in their 20s, but the maturity they possess is something to marvel at. That’s why the quotes from the characters as they talk can be extremely meaningful and deep. The picture above is a very simple quote tattoo ‘I want it to hurt’, which was said by Mae. You can get other short quote tattoos, like ‘I want to hope again’, ‘I regret nothing’, ‘let’s go steal from my boss’, or ‘I’ve got nightmare eyes’. You can ink long quotes with things related to those quotes as well.

Night In The Woods Constellation Tattoo

Constellations play a big part in the story of the Night In The Woods second supplemental game, ‘Lost Constellation’. It follows the narration of Mae’s grandfather, who tells Mae a story of an astronomer, Adina Astra. The game follows the astronomer in her travel to Frozen Lake. Angus, a character from the main game, is also shown as someone who knows stories behind all the constellations. The picture above is a minimalistic outline tattoo of probably the Auriga constellation with Mae playing her guitar in the middle.

Simple Night In The Woods Tattoo

Simple tattoos are usually the ones with just the outlines of a design with no shading or absolutely minimal shading. Many people choose these options for small tattoos as they can be small yet meaningful, cute yet classy, and sometimes fun and childish, like the picture above. It’s a Night In The Woods arm tattoo of Gregg Lee with some comic-like patterns around and the words, ‘Gregg rulz ok’ written above it. The tattoo seems like a design a little child drew up, mostly because it’s taken from the sketchbook of Mae, so the tattoo has large significance to the game.

Dot work tattoos are done by tattoo artists with making dots on your skin. The density of the dots here and there creates the design. Dotwork tattoos can be drop-dead gorgeous works of art if done right. It’s time-consuming, and the effort the tattoo artists put into the design is immeasurable, but they can be worth it, as evident from the tattoo in the picture above. It’s a Night In The Woods dot work tattoo of Mae in her ‘witchdagger’ costume with a pumpkin below and leaves flowing in the wind.

If you’re still searching for a few more options to ink today, then here are a few suggestions –

You can search on the net for all the sketches in Mae’s sketchbook, like the church statue or the tattoo on the arm on day one, by poking the sleeve with a stick. Poking the arm will roll up the sleeve and reveal the tattoo, and you have yourself a new sketch. You can ink a tattoo from these sketches.

You can choose a Night In The Woods tattoo of other characters from the game, like Bird, Angus, Casey, and more.