10 Best Nezuko Tattoo Ideas That Will Blow Your Mind! 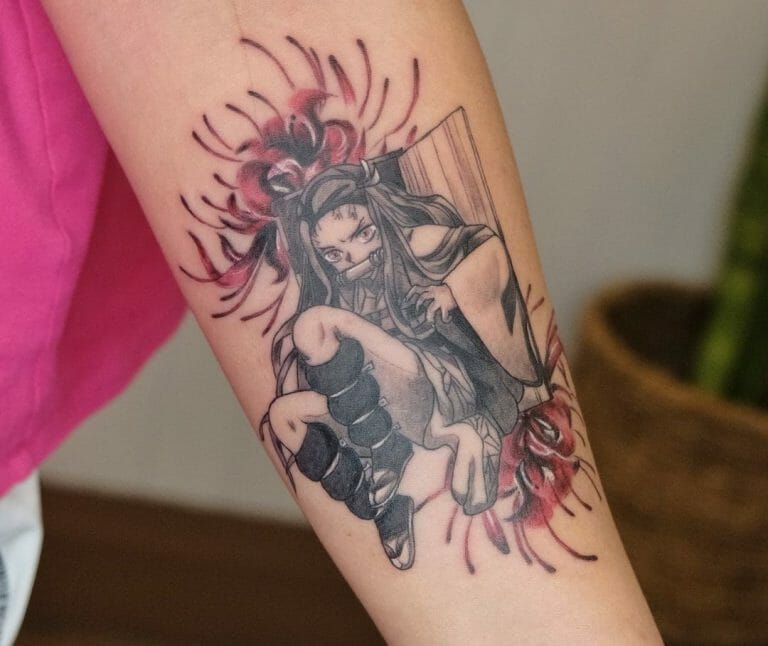 Another Anime fan? ‘Slay’ them with your killer Demon Slayer Nezuko tattoos about which you can check out this select list, which you are going to love.

Anime is one of the popular and upcoming genres of our time, and Demon Slayer: Kimetsu no Yaiba happens to be a famous Manga (comics which have originated from Japan).

Nezuko Kamado, our prime concern here in this list, is the most important character of Demon Slayer Manga, who is half human half demon, and shows human emotions like empathy, care etc. Her brother Tanjiro tries to turn her back into a human being so that his sister could be with him properly as well as take vengeance for the death of their family.

Nezuko’s photo really betrays the demon-like essence that is supposedly a part of her character. The Manga artist (also known as Mangaka) is famous for this Manga along with other ones. Tanjiro is Nezuko’s brother and their whole family was wiped out by demons. Nezuko was saved but she was transformed into a demon to some extent, while continuing to show human-like qualities, thus signifying different characteristic traits in a living organism- how we are all products of various binaries at once.

Nezuko is tattooed on the hands. This tattoo is showing the demon side as well as the human side of Nezuko. It makes up for a good tattoo for the hand as both the sides of her take up a good space while simultaneously being able to get condensed in the arm space.

This tattoo, probably on the legs, not very clear from the picture, is a lovely piece of art demonstrating entirely the demon side of Nezuko. We can see her pink eyes. After her transformation to the demon side, her eyes have turned into pink- a colour not often associated with evilness. Amongst popular understanding, pink is associated with innocence, simplicity and other qualities a child is supposed to have. Her pink eyes signify the fact that the human qualities have survived in her personality. Eyes are important and they characterize a lot in someone.

Very colourful tattoo to be considered for the upper arm just beside the shoulders. Various colours dominate the palette.

This is a very animated and cute tattoo of the demon slayer to be tattooed on lower arm. Muzan Kibutsuji has created all the demons in the Universe of Demon Slayer, including Nezuko Kamado. But his transformation or work in Nezuko’s case has not been that successful as the demon slayer has not been completely transformed into a demon slayer but she continues to retain her human-like qualities. She still thinks like human beings, cares for others, for her family and does not have the same motive as other demons, at least not entirely.

Another cute, cartoon-like and animated tattoo to be considered for the lower arm. Here, demon slayer is inside a box and just her face is visible with the bamboo muzzle, and her inward innocence is very visible through this tattoo.

Quite a fantastic idea for an upper arm tattoo. Red and black dominate the palette. It shows the demonic side of Nezuko. There are many layers to Nezuko’s demonic side that differ from other generic demons. She utilizes her sleep to get more energetic and fight while the other demons rely on human blood to continue to survive. These differences occur mostly due to the fact that she is still quite human.

Here, the demon slayer looks extremely ruthless. Her eyes show the demon-like qualities which she has been a victim of, in the Manga. Red and Green dominate the palette of the tattoo, giving a rich texture in terms of colour.

This tattoo, inspired by the Manga, is a great one for the upper arm, and we should look into the context and story behind it. While it is understood that demons are selfish and evil in nature, the demon slayer, after her transformation, did not completely change. Tanjiro, we can see, prioritizes others before him. He takes care of those whom he considers family. He is not very selfish in nature. However, we would not generally expect that from Nezuko because she is a demon slayer. Surprisingly, we would notice that she too, like her brother puts others, whom she considers family, before her and takes care of them.

Demon side of Nezuko Tattoo

This tattoo is a great work done on the lower arm and the artist’s creative mind has done quite a brilliant thinking.

This muzzle that the demon slayer needs are quite a requirement for her. It serves multiple purposes. Firstly, it stops her from biting anyone, which, otherwise would be dangerous and also it may result in that person’s transformation into a demon as well. Secondly, it would help her not show her fangs, as otherwise, she looks completely human, except for her eyes, which is a little confusing for others to understand. But if people saw her fangs, they would inevitably understand that she is not a human.

If you want to know more about demon slayer tattoo ideas, you can always refer back here and if you want to learn more ideas related to Nezuko tattoo designs, we have enlisted some ideas for you to read which you would love: