10 Best Neo-Traditional Owl Tattoo Ideas That Will Blow Your Mind! 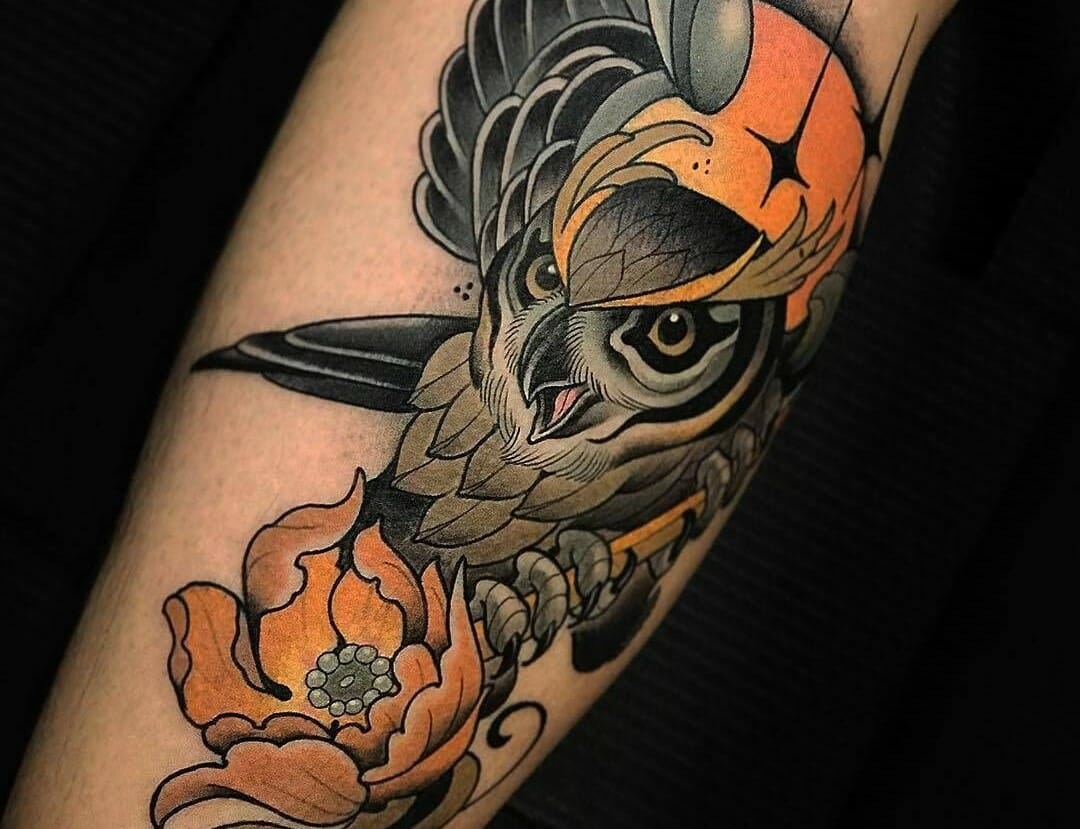 Are you just as enthusiastic about owl tattoo designs as we are but can′t seem to find the right one? Fret not, we′ve got you covered.

Neo-traditional Tattoos have been a massive hit for the past twenty years.

These bold, vibrant and ostentatious works of art never fail to impress and we′re absolutely mesmerized by their stunning beauty. Adding to that, there exist some of the coolest and hoot-est Neo-Traditional Owl Tattoo designs that you′ll love to bits.

Owls are special both mythically and spiritually. In the mythical world, these cute and sometimes grumpy-looking creatures hold a significant place in ancient civilizations and their storytelling.

The owl, elusive and stern, and stunning to look upon, has cemented its position in our contemporary age with an equally trendy tattoo rendition. The neo-traditional owl tattoo integrates its more conventional predecessors with a contemporary perspective, culminating in some of the most recognized body art in recent decades.

First off, we′ve a piece of art you just can′t look away from.

This absolutely amazing neo-traditional owl tattoo design is inked with so much quality and expertise, one can′t help but stare. Ideal for a chest piece, as is evident, this large design cover most part of the chest. The wings of the flying owl spread wide, covering the upper portion of the chest, highlighting the contours of the collarbone.

Neo-traditional art style can incorporate a variety of images and designs, hence the owls too, blend right in with the vibrant and bold colours. Every detail has been intricately and articulately drawn.

As for the symbolic meaning, an owl is said to represent wisdom while the eye of providence is known as the all-seeing eye of God. It is only obvious that an owl carries a spiritual symbol seeing as these birds are said to have links to the other side.

This beautiful piece of artwork is sure to catch many onlookers attention.

The artist creates a colourful and detailed work with emerald-coloured wings, and creates the rest of the owl with a reddish hue, giving it a refined and ethereal look.

In the owl′s chest, there is an amulet that holds an eye, another depiction of the owl with the all-seeing eye.

In traditional mythology and dream interpretation, the owl signifies one′s second sight, the capacity to look into the darkness and identify the truth. Owls have a strong connection to the spirit realm and were originally thought to be an anchor to the other side.

Another stunning artwork of the mysterious but cute owl and we can understand why these beautiful birds hold so much significance for different cultures, all over the globe.

In this owl tattoo design, the neo-traditional aspects have been beautifully incorporated to create this majestic bird. The red colour that the artist used gives the bird a regal and refined look, complete with a diamond-shaped motif enhancing the whole look.

Together with the bold colours and thick lines, the design looks hoot-worthy.

While most conventional neo-traditional tattoo designs are colourful, this one is a little different than those however, it still manages to catch attention with it′s stunning, illustrative look.

The bird is etched covering most parts of the chest, trailing lower. Clutching a human heart with its talons, the bird instils fear in people, far from the quaint, regal, owl tattoo designs we know and have seen so far.

Every little detail, each curve and line done with black ink looks smooth and neat. If you like a tattoo design that can hold it′s even without vibrant colours, then this is it for you.

Their ability to be quaint and sphinxlike while at the same, becoming predators to their prey when necessary, is quite remarkable. This makes them fearful predators and warriors are often closely associated with Owls.

It isn′t just the wisdom that makes them symbolical but it is their dark quality that gives them an interesting aura. In this neo-traditional owl tattoo design, the owl has been created to look like a headgear on the woman′s head. Ideal for both men and women who appreciate elegant and intricate neo-traditional artwork.

Though simple, this stunning neo-traditional owl tattoo design will never disappoint. The black and white give it a dark and edgy look while highlighting the sphinxlike traits in its indifferent look.

The artist only creates a close-up version of the owl, surrounded by flowers and leaves that gives the overall tattoo an elegant and sophisticated look, ideal for arm placement.

How sweet and cute does this neo-traditional owl tattoo design look? Owls apparently also represents the darker sign, linking them to death and it is believed that they bring bad omen, in some cultures.

However, it feels almost criminal-like to believe that and we hope that it′s far from the truth. Especially with this small owl tattoo design with the most vibrant colours, and sweet look that is sure to get you lots of compliments.

While other designs of neo-traditional owl tattoos are mostly colourful and bright, we′ve gathered a few black and white and outlined versions, too. Now, this is an unconventional design with ornamental decorations incorporated into the owl tattoo.

If you want something with a sweet, feminine touch, then you must get this tattooed, ideal for girls who want owl tattoos with a touch of ornamental work.

We cannot get over how stunning this piece of art looks and we can assure you that you cannot look away either.

The stunning vibrancy of red, yellows browns and blacks gives the tattoo a regal look that is otherwise lacking in a normal traditional tattoo idea. The artist, with great precision and details, drew this beautiful design of the bird. It is popular among girls however, men can get it tattooed too.

Lastly, we have this ostentatious piece that covers an entire arm. With its colourful, animated and vibrant look, the tattoo design is a real dazzle. Several varieties of motifs and colours have been used to create the intricate artwork. The owl′s eyes have been filled with yellow, giving it a predatory and uncanny look. The artist created an illusion of the owl holding its wings with its talons, giving a sinister look. It is perfect for those who prefer edgy tattoos with a spooky theme.

An owl tattoo may be used for a variety of purposes. These patterns look great in bright colours or black ink, in meticulous fine detail or in artistic or caricature designs, and as huge or little tattoos. Owls are frequently shown with emblems, such as a key, a clock, a rose, or a branch. Make sure that you explore such ideas and motifs before you get yourself a neo-traditional owl tattoo.