10 Best Neo-Traditional Bat Tattoo Ideas That Will Blow Your Mind! 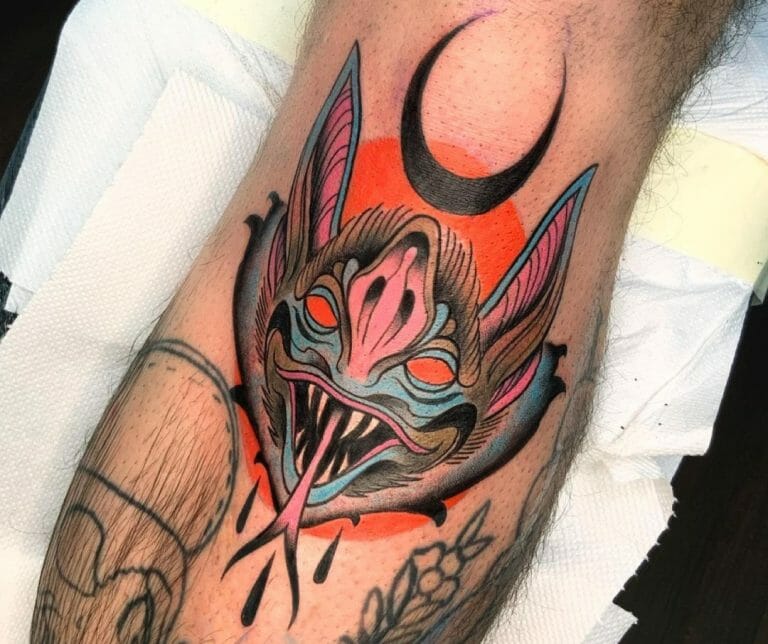 Neo-traditional bat tattoos are a great example of how to bring back the tradition to the contemporary.

These winged creatures are well-regarded in many cultures, considered to be an emblem of regeneration and rebirth. Neo-traditionalism brings the various notions to modern times with heavy experimentation and, of course, rad tattoo designs.

But why bat tattoos, after all? Well, why not! Bats are a great styling tool, allowing various tropes and placements to thrive. Moreover, bats have an aura of mysticism invariably attached to them that makes enthusiasts so keen on trying the animal on their bodies. Moreover, these nocturnal creatures with their individual senses also resonate with many men who carry deep perspectives about life around them. Also, these creatures on your skin will hint that you are someone with a sound sense of self-awareness and intuitive qualities. Neo-traditional tattoos aid the reappearance of these obscure yet potentially viral tattoo tropes to thrive in the tattoo industry. Want to know the many ways to get this cool tattoo style up on your body? Just keep scrolling!

Resembling the figure of the fictional Count, this neo-traditional bat exhibits an illustrative style of fantasy to body art. The bat wings are methodically wrapped around the animal’s body to draw a parallel with reality and the character. Besides the black garb of the bat, the red rose and bright green leaves serve to draw attention simultaneously adding the oomph factor to the design. The quality of this piece increases exponentially with the inverted placement to resemble how these creatures generally cohabit.

Speaking of ornamentation, this art piece raises the bar of neo-traditional bat tattooing with its glamourous wing design with flowers and shimmers. The red hues alongside the black ink make this neo-traditional bat come to life. The artist fills the design with minute details and also adds a cute pair of glasses to make the aesthetic pop up. You can get this adorable tattoo anywhere in your desired location and it will still steal glances from passersby.

The intricacy of this colourful artwork comes from the artist’s choice of flowers. Breaking away from the traditional even with the choice of flowers is an amazing way to establish neo-traditional techniques all throughout the tattoo design. The grace of adding floral pieces makes these bat tattoos apt for women as well as men.

This charming bat tattoo mixes spooky with cute and we are all for it! The artist mixes black shading with eye-catching colours that of orange and pink. The red moon that hangs overhead hints at something ominous but there is duality in this tattoo design nevertheless. Sites like your forearm and calves are a perfect fill to flaunt such a neo-traditional bat tattoo.

Many people avoid inking the back of their heads due to the fear of any permanent damage. But if done right, these tattoo designs look every bit cool and uses the exposure to their benefit. The animal is here portrayed in a rather gothic way, making the bat a symbol of death and desertion. The venomous fangs and black moon pay tribute to the ways of the traditional flash designs and at the same time introduce a modern element with the use of shading and colours.

Gothic tattoo designs introduce the original notions and elements attached with bats and note a striking display of images. Here, the artist links the grim connotations of a bat with a skull to arrive at a concrete meaning inspired by myth and folklore. The neo-traditional bat exhibits great detail in its shape and face structure and also evokes a sense of fear for the creature. This elaborate tattoo on the chest will definitely be a cool addition for men who appear confident and mysterious to the rest of the world.

Equally dark in its elements, this neo-traditional bat tattoo on the abdomen takes a novel way to style the animal. Bats are generally considered to be cold-blooded creatures living in the dark and chilly corners, but the artist here reverses the notion as they portray the bat inflamed, perhaps acting as a symbol of passion. The orange flares add an element of mysticism and create a new piece that uses just the right amount of colour.

If you are sick of the mainstream red, green, and yellow, use shades of purple to get yourself a flamboyant neo-traditional bat tattoo design. The style is modern, and at the same time bases itself on the foundation of traditional tattoos. The spider web and the infamous satanic symbol right in the centre of this body art results in increasing the danger quotient. These neo-traditional bat tattoos can easily take the place of your fancy for a sleeve tattoo design without compromising on the quality of the piece.

Add a neo-traditional bat tattoo head but amalgamate it with a skull. Sounds cool? Well, it sure does look rad. The hollows of the skull are filled with fiery hues to accentuate the dark neo-traditional style. The inclusion of inverted crosses and skinny daggers provide a modern meaning to this bat tattoo, simultaneously enriching the tattoo style with dark, evil elements. You can also include a quote that resonates with your personality and there you have a holistic bat tattoo to flaunt.

For cute bat tattoos, derive inspiration from fruit bats that are too adorable to pose as body art. The tattoo artist here takes a candid image of the fruit bat to style a back tattoo design. The slanting stature of the bat along with the colourful fruits enwrapped in its wings covers a generous portion of the back, giving your neo-traditional tattoos the necessary push to break away from conventional style. The shades of brown in the bat body enable to make the design seem realistic and at the same time links the more positive connotations with the creature.

This bat looks like it loves life and all glimmering things! The artist sets an example of how we can use the often ignored tropes alongside bats to include variety in neo-traditional bat tattoos. The use of blue and lavender makes the design soothing to the eye while adhering to the modern style of tattooing. You can go ahead and replace the crystal with the elements that you prefer and create your own neo-traditional tattoo.

Back to the dark side of the moon, this neo-traditional tattoo utilises the nape of your neck to settle itself on your skin. The classic red and black contrast is again evident here, hinting at the danger element. However, this bat tattoo is more appealing than the others for its details on the moon alongside the intricately shaded bat. If you love all things creepy and the adrenaline rush, this style of neo-traditional bat tattoos are the way to go.

If you are someone who lives life carefree, a funky neo-traditional tattoo could be your cup of tea. This neo-traditional bat is coloured with tinges of neon green that uplifts the design out of the ordinary. Notice the minute additions to this piece that encompasses a dark castle, and extra pair of eyes to give the tattoo an edgy style. The various techniques with the available colours also add to the increased aesthetic of this tattoo design. We recommend you get this bat inked on your limbs to provide the necessary exposure.

As you have seen already, neo-traditional bat tattoos provide ample license for you to experiment with the style and also link the same with your persona. Though the representation of bats differs in different cultures, these winged creatures are a boon to the tattoo industry. Not only men, but women can also try out these unique yet statement bat tattoo ideas and usher in a plethora of neo-traditional tattoo designs. Whether you are a bat lover or just looking for off-beat tattoo tropes, this tattoo style will come in handy for many. Now that you know a lot about how to play around with the animal, visit your trusted tattoo artists and get set inking! But if you are still looking for more inspiration to find your perfect match, the following suggestions on neo-traditional tattoos could help you out: