101 Best Nautical Tattoo Ideas You Have To See To Believe! 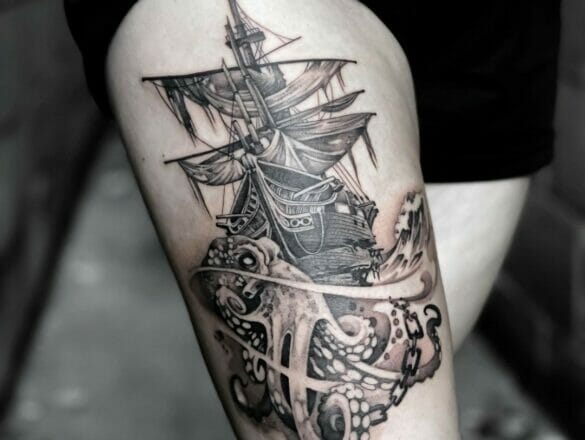 What does a nautical star tattoo mean?

Nautical is anything related to the sea or ocean. A nautical tattoo is a type of tattoo that features the use of water in some way, whether it be waves or just a general maritime theme.

A nautical tattoo also commonly features objects like anchors, compasses, and ships. The meaning of nautical tattoos is often symbolic. A ship, waves, and an anchor are all easy to relate to the sea. This tattoo here is very significant and has meanings behind it. A sailing ship illustrates life in many facets. It describes life, hope, adventure, and strength. As the boat sails, it goes through various storms and is driven by the wind. Hence, this tattoo illustrates the strength and momentum of life. Ship tattoos are very relevant, and sailing tattoo designs are widely popular among sailors as it is a way of remembrance of a voyage.

This anchor tattoo right here is so perfect for a sleeve or arm tattoo. The anchor is the most secure object; it symbolizes stability and is invincible. Anchor is used to fastening a ship; similarly, an anchor is anything that is stable and reliable. Anchor tattoo might illustrate a person for someone, while it might depict salvation and peace for others. Sailors usually get anchor inked in order to sense their love for the sea.

This tattoo is an old-school nautical tattoo with an illustration of all the sea elements. It is almost a small landscape of a ship sailing with clouds above, a lighthouse, and waves. All these nautical elements have particular symbols. The stormy weather depicted says a lot about the strength of the ship. Ship tattoos with a ship sailing in stormy weather say a lot about the fight and struggles of life. It shows the steadfastness and desires of the sailor too.

Moreover, the waves are a sign of hustling and rushing, and the lighthouse showcases the proximity of peace and safety. Generally, the lighthouse is used to spot if the ship is safe and has not crashed. Every nautical element displayed has a unique meaning.

This tattoo has a lot to offer; the compass signifies momentum and motivation. The compass guides the ship and saves it from getting lost in the sea. Similarly, the compass depicts the path of life. It is a symbol of correctness and aspirations for most people. This nautical compass tattoo has several sea elements, including clouds, anchors, and compass.

Nautical tattoos are a great way to pay tribute to the sea and to those who have been there. The ocean is a key part of our history, and it still affects us today. In fact, the ocean is what connects us all; we’re all believed to be made from water.

There’s something about nautical tattoos that is both captivating and mysterious. Anchor is for hope and power, while the ship wheel drives the ship for a successful voyage. Ship wheel is the symbolism of motivation that drives towards success. It describes the completion of all the desires and is considered as a sense of fortune. The ship wheel also symbolizes the strength of how the ship sails even in stormy weather. They can also represent freedom and deep inner desires.

This tattoo has an added quote that compliments the complete look. Asking your tattoo artists for any such personalization is always a better choice.

Nautical tattoos are popular among sailors. If you are perplexed with how come rooster and a pig came in mid of nautical tattoo designs. The designs represent the nautical industry, which is historically connected with the military. The nautical tattoo has features that are universal to all sailors. It is believed that the pig and rooster symbolize good luck, good fortune, and prosperity. They are also symbols of wealth, health, fertility, and happiness.

Pigs are animals that are known to be intelligent animals. Roosters are usually seen as being symbols of faithfulness. This is because they always wake with the first light of day to announce the break of dawn. The fact that they never seem to sleep is symbolic of our own need to never stop working hard. This tattoo design is usually inked on feet, with the pig on one foot and the rooster on the right foot.

The major superstition is if the sailor has a pig and rooster tattoo, then the shipwreck is avoided.

The pig and rooster tattoos are often associated with good fortune in Eastern culture, while the idea of using them in tattoo designs is relatively new. They are believed to save from an upcoming shipwreck.

Either way, there are many possible interpretations behind this rooster tattoo idea.

The ocean, the waves, and all of the images of ships remind us of a simpler time when adventure was in every direction. Tattooing a nautical star depicts the destination. Moreover, the swallow depicted stands for the light of home. The swallow tattoo is a sense of guidance back home without being lost. The nautical star tattoo meaning is a lost boat as the north star signifies the direction of the coast. Nautical tattoos have a long history, and they are still popular today. These tattoo ideas will help you find a design that suits your style. Swallow tattoos, lighthouse tattoos are similar as they both guide the way back home.

The ocean, the waves, and all of the images of ships remind us of a simpler time when adventure was in every direction. This cute colourful wave tattoo is so unique and aesthetic. This nautical tattoo sleeve design is colourful and showcases the ups and downs of a wave. Waves are so inspiring and significant to maximum people. Today, people get nautical tattoos for less explicit reasons, like because they love the ocean. This tattoo can be made anywhere as it looks really good, especially with the vibrant colours in the tattoo.

The nautical tattoo has roots in seafaring tradition. It commemorates a sailor’s life on the waves or tells the story of their voyages. The map signifies the safety and record of every upcoming venture.

The nautical map is for sailors who want to tribute an old voyage. This tattoo displayed here has sea urchins, a map, a compass, and a stormy night. Nautical tattoos are also popular with military personnel because they remind them of their duty and commitment to service.

Nautical tattoos have been around for a long time and have been used in many different ways. For example, sailors would often get nautical tattoos as a way to remember their loved ones or a past voyage. These hula girls, pin-up girls, or mermaids are inked in order to memorize their young girlfriends, wives of sailors. Hula girls were inked every time a sailor crossed Hawaii. Pin-up girls tattoo culture is since ages. These meaningful tattoos are all worth a portion of your body; check with various tattoo artists for getting these.

Whether you’ve sailed on a ship, studied nautical maps, or simply loved the ocean from afar, it’s safe to say that everyone has some connection to the ocean. Because of that, many people choose to get nautical tattoos to celebrate their love for it. Nautical tattoos have been around for a long time and have been used in many different ways.

What is the meaning of a nautical tattoo?

A nautical tattoo is one that is inspired by the sea or sailing. These tattoos can be very beautiful, and they are often seen as a way to show your love of the ocean.

What are some popular nautical tattoo designs?

There are many different nautical tattoo designs, but some of the most popular include anchors, ships, seagulls, and dolphins.

How long will my nautical tattoo take to heal?

Like all tattoos, a nautical tattoo will take time to heal. It is important to follow the aftercare instructions provided by your tattoo artist to ensure proper healing.

How much does a nautical tattoo cost?

The cost of a nautical tattoo will vary depending on the size and complexity of the design. Be sure to discuss pricing with your tattoo artist before getting inked.