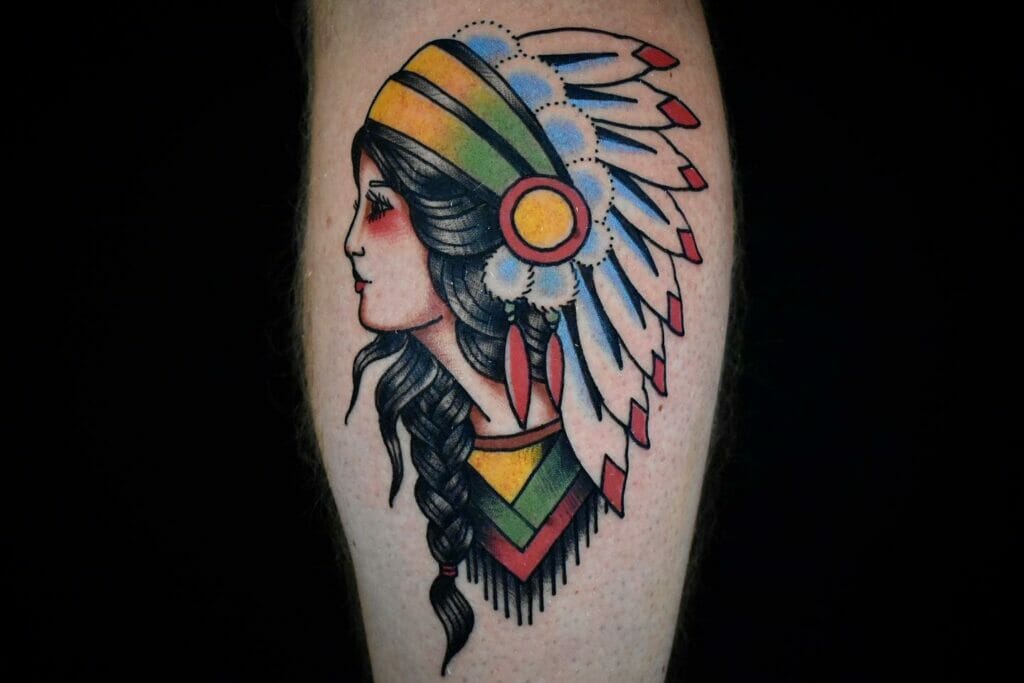 People having indigenous American culture can get ink inspired by an array of Native American sleeve tattoo designs. Take your pick today!

Native Americans are the true Americans who resided over the continent for thousands of years, and they share the indigenous first American blood.

The American Indians or Amerindians constitute most of that population and possess a very rich cultural and tribal heritage. Every aspect of them can be creatively transformed as body art and ink freaks originating from these cultural backgrounds will be highly elated to ink them.

The culture in the lands of Amerindians, which Christopher Columbus discovered, is certainly different from the present-day Americans. The Incas of Peru and the Aztec warriors from Tenochtitlan were the prime native American rulers and warriors. The Red-Indian tribal originality paves the way for the utmost heroic tattoo symbolism, from a wide range of weaponry to ferocious wild beasts and the highest form of amazing art and sculpture. They worshipped natural entities like the sun or the moon and were administered a headdress. Their well-decorated emblems and flags can be transformed into a tattoo design. Arm-sleeve or leg-sleeve tattoos provide plenty of room for an elaborate design, and these unique native American ink ideas can be perfectly placed on them. Go through this article to witness some unique native American tattoo designs.

Cherokees are one of the oldest inhabitants of America. The indigenous tribes, who some conclude to be the actual dwellers of America, represent the Cherokee, Cree, Blackfoot, and other different tribes each having a distinguished set of cultures. Admirers of this lost heritage can ink the ideologies or motifs of these native American tribes as arm or leg sleeve tattoos.

This upper arm sleeve tattoo is one of the unique dreamcatcher tattoos along with tribal patterns. The flowers and the branches are symbols of the Cherokee tribe, and the willow hoop design that can recover someone from bad dreams represents Native American culture. This unique medley of designs urges more and more users to ink Cherokee Indian tattoos.

The concept of independence, bravery, strength, and knowledge is frequently connected with feather tattoos. Integrating diverse components, like dreamcatchers or utilizing vibrant colors, one may get inked distinctively with delicately beautiful feather tattoos. Feather tattoos can imply different meanings like a peacock feather indicates beauty, pride, and monarchy, but an eagle feather symbolizes courage and power.

Since time immemorial, feathers have been affixed to weapons, hung in households, and employed for more than just decoration by the Native Americans. This arm full sleeve tattoo of multiple feathers is a unique design of one of the important Native American symbols. The full coverage of feathers from wrist to shoulder is the perfect tattoo idea for ink freaks wanting to get tattooed with a deft touch of rich culture.

In Sanskrit, the term ‘mandala’ means ‘circle’, and these designs are comprised of several concentric circles and shapes. These geometric elements have long been utilized as a method of inner communication and have mystical associations around the globe. Mandalas are ideal for sleeve tats or general shoulder tattoos because the shape replicates the rounded structure of the body joints.

The Aztec glyphs were thought to be a trademark of the Mexican cartels, with the imagery typically coming to life as wonderful tattoo inspirations. The Aztecs valued tattoos as a way to display accomplishments and serve as a symbol of membership in a particular tribe or community. They can certainly fit different tribal designs and can be classified under native tattoos that both men and women will cherish.

This arm full sleeve tattoo with red and black ink has patterns and designs that were adapted from Native American Hupa Yurok and Karuk tribes. The wearer can express ultimate tribute and honor to her ancestral folklore. Aztec tattoos can be inked with a plethora of geometric and tribal designs and define the true meanings of a genuine Native American culture.

A Native American tribe chief or a headdress was the commander of the mass in both administrative and combat sectors. These individuals were respected by their tribes because they had generally demonstrated their knowledge and fortitude throughout a lifetime of adversity. Their amazing ornaments, feathered crowns, and elegant tribal style can be featured as motivational Native American chief tattoos.

This arm sleeve tattoo refrains the wearer from being afraid and carries on the legacy of a lion-hearted lineal leader. The unsurpassed use of an array of detailed grey and black inks makes this tattoo a realistic and stunning design. The variations of the ornaments and the crown of tribal chieftains intensify these Native American sleeve tattoo ideas. The sketch of a wolf headdress or a Red Indian leader can be perfectly accoladed with honor, and many users can be ink inspired by such outlandish tattoo designs.

Skull tattoos may represent strength and authority while also protecting the wearer from evil spirits. Skulls may truly be a celebration of life, even though the fact that most men get them as a way to seem macho with ominous style and menacing ink. The skull head tattoo design enables one to integrate delicate images with powerful contrasts of death and glory.

Portrait tattoos are very personal on the one hand and depict verisimilitude on the other hand. One has to go beyond the heavy depths of personal agenda to ink the portrait of his beloved, and these tattoos might require a larger area of canvas for comprehensive designs. Portrait tattoos are the types that are so treasured that people can’t stop talking about them, and having a rich cultural heritage like ancient Americans will plunge the idea.

This arm tattoo represents a wolf headdress but with a different approach. Wolves are venerated as spirit vanguards and are believed to shepherd the spirits of the dead in many Native American tribes. Despite a deadly raging look, this portrait tattoo has been created with the face of a peaceful woman vignetting ultimate calmness and solitude.

Eagles are revered as symbols of strength, courage, and spiritual energy in every community in which they are mythologized. They are frequently seen as a symbol of wisdom due to their excellent eyesight or vision. An eagle’s appearance during a Native American ceremony is taken as affirmation that the message has indeed been heard, and thus it becomes an important tattoo inspiration.

This upper arm sleeve tattoo cites a naturalistic eagle which is a significant motif in Native American culture. The appropriate use of black ink and the unique work of the tattoo artist added a three-dimensional effect to the feathers and the eyes of the eagle. For Native Americans, an eagle tribal tattoo implies protection and tremendous achievement, and an arm or leg sleeve tattoo will compound such ink designs.

When referring to a tattoo design aesthetic, the term “realism” is used to describe a realistic yet artistic graphics approach that emphasizes the portrayal of all details in motion. The reason tattooing realism is so prevalent in the tattoo field right now is that tattoo artists are becoming more and more skilled and sophisticated in their abilities to ink realistic tattoos.

This realistic ink sketch of a Native American woman adds an extra dimension to this leg sleeve tattoo. The high-detailed outlines with grey and black ink made every last bit of effort of the tattoo artist work perfectly. The crown with feathers and the accurate ink transformation of the face art of this Native American woman make it a realistic tattoo of the highest order.

Leg sleeve tattoos might extend from ankle to thighs or might represent calf or lower leg tattoos as half sleeve tattoos. Leg tattoos can leave any observer awestruck, especially when paired with shorts. One can fit a Native American tattoo design from the catalog of the wild animals and unleash his rowdy nature.

This leg half-sleeve tattoo certainly adds a creative spark to modern ink designs. A ferocious wild wolf which is a symbol of the Native American warrior spirit identifies the undaunted personality of the tattooer. Whether it is a wolf headdress or a loan wolf tattoo, the utmost qualities of prowess and fearlessness make it a popular choice for cool but resolute leg sleeve tattoos.

The extremely detailed and well-structured design of native American tattoos can be inked as a half sleeve or full sleeve tattoo. Although the message is clear from this community of tattooers that they ink native American tattoo designs as a notion of pride, some might also get them done as fancy artworks, provided it is meaningful and respected. One can try out some other designs as well:

What is the meaning of a Native American tattoo sleeve?

A Native American tattoo sleeve is a form of body art that involves the intricate and meaningful placement of various symbols, designs, and images inspired by the beliefs and traditions of Native American cultures. These tattoos often feature elements such as spirit animals, feathers, arrows, dream catchers, totems, and other designs from Native American mythology. The spiritual meaning and symbolism of these tattoos can vary from tribe to tribe, but generally they represent strength, courage, protection, and connection to one’s ancestors. They have also come to be seen as a way for people to express their pride in their Native American heritage. In some cases, the sleeve tattoo may even serve as a visual reminder of important lessons or values that have been passed down from generation to generation. No matter the specific meaning behind a Native American tattoo sleeve, it is an incredibly powerful and meaningful way for individuals to embrace their heritage and share their story with the world.

What are some popular designs for Native American tattoo sleeves?

Popular designs for Native American tattoo sleeves include animals such as eagles and wolves, symbols that represent the four directions, feathers, arrows, dream catchers, totems and other designs inspired by Native American mythology. Additionally, some people choose to incorporate imagery of their ancestors or tribal symbols into their sleeve design. Often times the tattoos are used to tell a story, such as the stages of life and experiences one has gone through. As Native American tattoos carry so much meaning and symbolism, they are often seen as a way for people to express their pride in their heritage.

How much does a Native American tattoo sleeve cost?

The cost of a Native American tattoo sleeve can vary greatly depending on several factors, such as the size, complexity, and detail of the design. Generally speaking, however, prices can range from $200 to $2,000 or more for a full sleeve. Prices may also be affected by the artist’s experience level and reputation.