10 Best Naruto Seal Tattoo Ideas You Have To See To Believe! 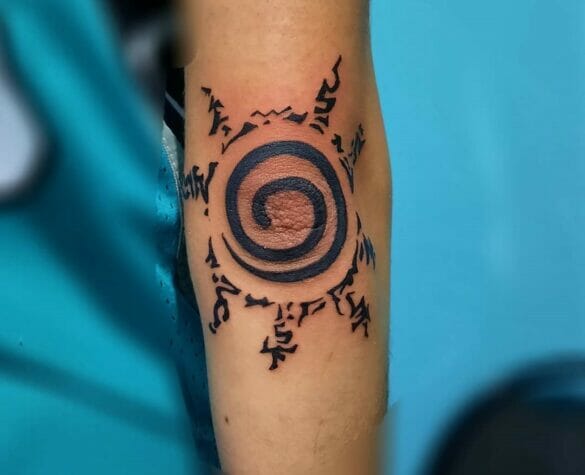 If you’re into anime, especially Naruto, and looking to get a Naruto seal tattoo done to show you’re a true fan, this list would be perfect for you.

Nowadays, wearing graphic T-Shirts isn’t enough passionate anymore- the urge to permanently ink your favourite thing on your body is hard to resist.

You might hazily remember watching Pokemon growing up, or maybe even Dragonball Z, but you will definitely know Naruto. The lively yellow haired boy who turned into a tailed beast and fought evil won the hearts of millions.

Anime tattoos are a huge thing now, buzzing all over the internet. Besides adding to your cool, new look, it brings a different kind of charm, and is very unique. Naruto, hailed as one of the most popular animes of all time, ever since the show’s original release has had millions of fans etching their designs on their skin to show their love. Especially at anime and cosplay conventions, your Naruto tattoo will always make for an interesting topic of discussion.

The Classic Naruto Seal Tatto On The Belly

You’d be surprised how often the belly is the desired area for a tattoo. The Naruto Nine Tails seal tattoo is one of the most common seal tattoos people get done. This particular Naruto demon seal tattoo is remarkable- the hint of red amidst the black add to its charm. Being a fairly large tattoo, it will take a long time to complete it, but if you have the patience and the will, go for it! The tattoo also sports very fine work on each of the nine tails, making it very detailed.

This Unique Naruto Seal Arm Tattoo Is Bound To Charm You

This is another version of the Naruto 9 Tails Seal tattoo that is being shown. As popular as a Naruto stomach seal tattoo gets, the arm is not a bad place to get a tattoo either, and it is easier to manage. What catches the eye here, is the beautiful addition of yellow and red on the top and the bottom that makes the black even brighter, which a combination of orange since Naruto is acclaimed to be the Orange Saviour. It is obviously intellectually stimulated and the fine details on the tails sign are done with smooth finnesse.

Here we see not one but two tattoos on each arm and a fan favourite. Accompanying the Naruto seal sign this time is the cursed seal of the Uchiha clan home to a very popular character in the show- Sasuke. The tattoos are simple blackwork- the most classic style of tattoos done. This simple yet cool combination of tattoos are sure to be head-turners and will be rather easy to take care of since blackwork tattoos are known to cause the least amount of complications.

These Cursed Seal Tattoo Couple Will Rock Your Wrist

Sasuke himself has a large fan base in the anime culture and these tattoos are his Mangekyou Sharingan and Rinnegan signs. The Mangekyou Sharingan sign, especially the sharingan eye varies throughout his clan and it’s a very popular tattoo that fans choose to get. The red looks bold and powerful while the purple offers a calmer visual. Coloured tattoos are done with extreme care and you should only get it if you are not prone to skin allergies.

A Simple Blackwork Tattoo That Is Small Yet Powerful

This small and simple blackwork tattoo on your wrist will always be brightly visible. This is the Anbu Black Ops sign tattoo, which is another popular Naruto tattoo people opt for because of its simplicity. You can get this tattoo in any size and anywhere in your body. If it’s blackwork and small, it will require even lesser of you attention with the aftercare and you won’t have to committ to a huge tattoo- this might be a sign to inspire you to get your first Naruto tattoo done.

This Line Art Naruto Tattoo Will Blow Your Mind

This line art tattoo has amazing details and is of Minato Namikaze, Naruto’s father. In his village and the ninja academy, Minato had great respect and his sealing jutsu is also inscribed. The extremely minute anime-like detail and shading make the tattoo really stand out and although it’s large and will take some time to perfect it out, it will be worth it. Blackwork tattoos are always simple and stunning and you can get it anywhere.

Skilled in martial arts, Kakashi Hatake was Naruto’s sensei and a jonin ninja and everyone’s favourite besides Sasuke right from the first season. This blackwork line art tattoo is movingly powerful as it capture’s Kakashi in a bold presence- his jutsu chakra being his sharingan eye. In Naruto’s village Kakashi is very well-liked and so will be your awesome tattoo if you decide to get this done. The arm might be the easiset place where you can get this done if it’s your first since it would be easy to take care of and a line art tattoo would be the least complex all while looking beautiful.

This Longitudinal Arm Tattoo Will Definitely Win You Over

It’s colourful, captivating and is significant to the entire Naruto clan in this ninja academy related anime. The contrast of the red (sign of Gaara) and black (Naruto’s reaper death seal) followed by the green and black make this tattoo absolutely irresistible, complete with well-crafted details. This minimalistic style of tattoos is very vougish nowadays and is incredibly attractive. Getting four tattoos done might be a lot of work and painful, yet a vertical line of tattoo on your arm will look really good but will require a lot of sincere aftercare.

This Bold and Bicoloured Naruto Tattoo Should Be Your Next Choice

Itachi Uchiha, was a member of terrorist team called Akatsuki and the older brother of Sasuke. A tragic background and the evil act of murdering his entire clan somehow rendered Itachi a fan favourite, and any Itachi tattoo became highly popular. This bicoloured tattoo is just as powerful as the character and the beautiful combination of the red and black shading really pops out on your skin. It’s a fairly large tattoo sign of Itachi’s sharingan eye and it is to be noted that red ink might cause problems to your skin but if you’ve got a green light from your artist go for it and create magic with just two colours.

The Most Popular Naruto Tattoo But It’s Not His Seal

No it’s not a sealing chakra or a part of a cosplay, like Sasuke’s sealing chakra on his back that Kakashi helped seal or the eye of Gaara or any other Naruto seal mark tattoo. Instead it’s the sign of the Akatsuki clan that isnpired everything ranging from graphic tees, to jewellery to custom cloaks. The red cloud tattoo alone would have been common but the black crows make it so much better. The white lining of this simple sign adds a pretty touch and its effortless design is all the more reason you should get it. The bright red of this simple tattoo will overshadow a blackwork Orochimaru anyday.

The anime culture has taken the world by storm, with cosplay booming over the internet and worldwide, especially Japan. Cosplay gets difficult as you have to find the right items to dress up but getting a tattoo of your favourite Naruto seal isn’t much work. As anime proceeds to portray Japan’s diverse culture it also holds significance due to it’s admirable plots and immaculate graphics.

Keep the Naruto tattoos coming because it’s never enough and here are some suggestions for your next one.

Minimalist sign tattoos of Asuma Sarutobi, who was a different sensei of Naruto besides Kakashi, seal or line art tattoos of the dog Akamura, belonging to Kiba Inuzuka, a classic blackwork of Shikamaru, a Gaara eye or, spread over your back, a one tailed tanuki called Shukaku would be a great start. You should get your first tattoos on arms and places where it doesn’t hurt much and then move onto your belly, thigh or neck. There are many different ways you can go about it but researching about what you want to get and talking to your artist should be the first step and you’re all ready to sketch your favourite seal from Naruto on your skin.