101 Best Mortal Kombat Tattoo Ideas You Have To See To Believe! 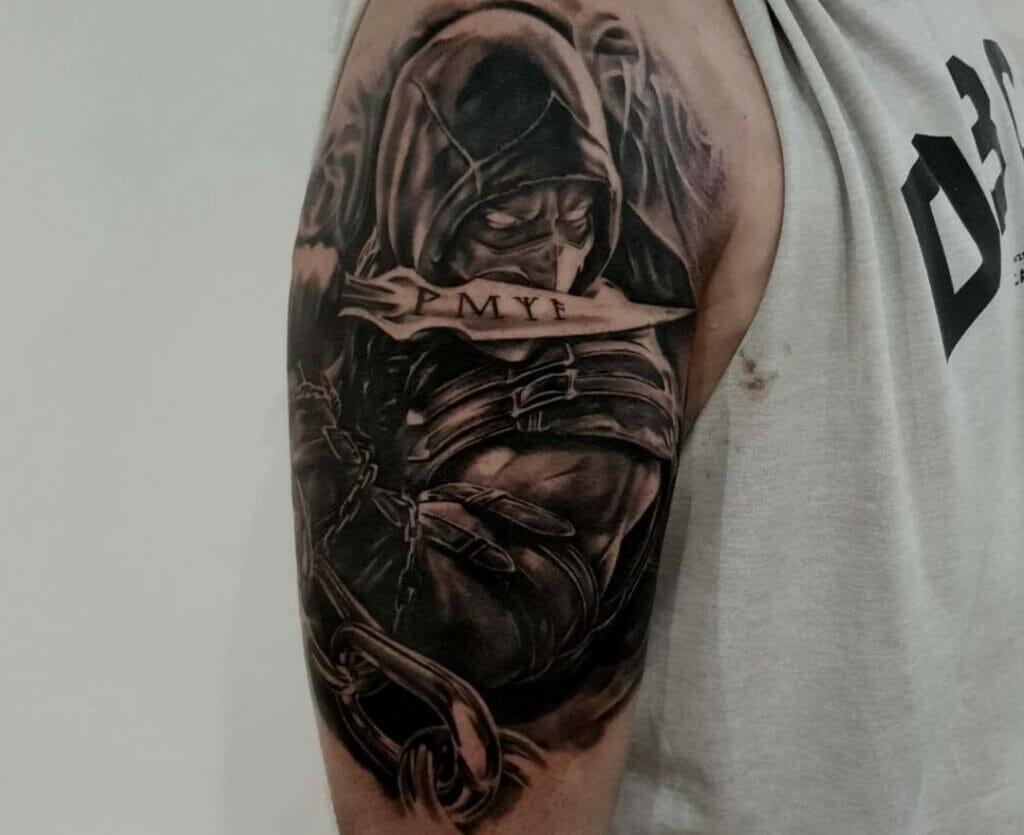 Are you a fan of Mortal Kombat epic fights & characters? Here is the list of best Mortal Kombat tattoo designs that can look great on your skin.

The world of Mortal Kombat is thrilling and action-filled, and there is no better way to pay homage to this exciting world than with some awesome tattoos!

This epic series started as a game and later turned into movies and TV shows that have some of the most fearsome and brutally violent fictional characters. The series has attracted many fans across the globe.

The Mortal Kombat storyline is high on adrenaline with many twists & turns with a perfect blend of emotions, greed, love, lust & friendship that has kept the audience on the edge of their seats for close to two decades now. The characters can be morally greyish at times, like the Scorpion ninja, who is the official mascot of the series. At times, the story can be extremely dark, like the character of Shao Kahn, who can do anything for his power of greed.

Now is the time to get a fantastic Mortal Kombat tattoo! These Mortal Kombat character tattoos look great and have a rich story that you can attach to your personal life with influential characters like Sub Zero, Scorpion, Kitana, Johnny Cage & many surviving realms in the Mortal Kombat field. The following list should assist you in deciding what kind of ink you want on your body. We hope that with the help of these tattoo ideas, you can have a better idea of what kind of ink you want.

Read along to have a look at some of the most popular Mortal Kombat tattoos that people love to have on their bodies in the art and tattoo community.

Ko’atal, also known as Kotal Kahn, is the fourth Emperor of Outworld and a Mortal Kombat anti-hero who first appeared in Mortal Kombat X. He is a very interesting character, and you can show your love; for him with this awesome tattoo!

This is part of those Mortal Kombat tattoos that are perfect for fans of the game. You can find the tattoo embellished with colour and animals, fitting in with the general vibe of the game. This is one of the best designs for the character you can find.

The mascot of the Mortal Kombat fighting game franchise, Scorpion, is one of the most fierce and interesting characters in the game. He is an undead ninja and is driven by revenge, and he wants to avenge the murders of himself, his family, and his tribe.

The Mortal Kombat tattoo logo is another of those amazing tattoos that is a set of gorgeous and elegant kombat tattoos for men and women.

If you are looking for Mortal Kombat tattoos, you should definitely try to get this one! Not only is the design awesome, but you can also find many great variations of it, sometimes incorporated with other characters like Scorpion. If you like the game, then such Mortal Kombat tattoos are perfect for you!

In the Mortal Kombat fighting game franchise, Sub Zero is a ferocious character mostly distinguished by his ability to wield ice in various forms. Sub Zero is a warrior from the mythical Lin Kuei clan.

This is another set of kombat tattoos for men and women who are avid fans of the game. You can also get Mortal Kombat tattoo that has one of Sub Zero’s greatest lines – “Finish Him!” engraved along with it if you like.

If you are looking for a zero tattoo with intricate designs and awesome realism, and if you like Sub Zero, MK and this thrilling world, you should consider getting this Mortal Kombat tattoo. If your favourite character in the game is Sub Zero, MK will certainly be very interesting for you.

Whether you are looking for dragons, characters or symbolic art, a great aspect of the Mortal Kombat tattoo world is that they have amazing ideas for tattoos.

A Mortal Kombat tattoo with a royal meaning, a dragon, can be the sign of power, majesty and all that you hope to find in life. A great idea for a Mortal Kombat reptile tattoo is that of a majestic dragon. It is also seen in the logo, representing fire, passion and fighting spirit. This is a set of riveting Mortal Kombat tattoos for men and women. You can also find many kinds of dragons, along with other Mortal Kombat characters and themes.

You can also find many variations of the dragon symbol. If you want more ideas for a Mortal Kombat reptile tattoo, be sure to see other tattoo ideas as well.

Kitana is a fictional character who appears in the Mortal Kombat video game series. She makes her Mortal Kombat II debut as a royal from Edenia, a fictitious kingdom. Her main weapon is a pair of steel fans, which she employs for the majority of her special strikes.

Mileena is a fictional character who appears in the Mortal Komba franchise. She is a clone of Edenian princess Kitana, made with the blood of the fictitious Tarkatan species, and first appeared in Mortal Kombat II. She is also a great ferocious character that you can find in this universe, with some amazing fight scenes throughout the game.

Get a Mileena Mortal Kombat tattoo if you are on the lookout to find an impressive tattoo idea. If you like this design, you might find other similar tattoo designs as well.

A Mortal Kombat tattoo that is ferocious and gorgeous, this is a tattoo design you will definitely find to enjoy.

All the Mortal Kombat tattoo styles you will find are very intricate and often very well suited for larger tattoos. Here we have a full arm tattoo that shows Scorpion and Sub Zero in fighting stance, representing a popular action scene with the two of them. Having a fascinating and beautiful full arm tattoo filled with all the characters you love is a great idea you can try out.

These Mortal Kombat tattoos might just be the ones you need to turn your body into a canvas. You can also like the following ideas:

How much will a Mortal Kombat tattoo cost?

The cost of a Mortal Kombat tattoo will depend on several factors, including the size and complexity of the design, the location you choose to get it done, and the artist’s rates. Generally speaking, small tattoos typically start at around $50 while larger pieces with more intricate designs can cost up to hundreds or thousands of dollars. In addition, depending on the artist, you may have to pay a deposit or minimum fee before your appointment. Ultimately, it is important to discuss pricing with your chosen artist prior to getting any tattoo. This will ensure that you are aware of all costs and can make an informed decision.

What is the meaning of a Mortal Kombat tattoo?

Mortal Kombat is a fighting video game series that debuted in 1992, and has since become one of the most successful franchises in gaming history. It has been widely praised for its unique characters and its engaging storylines. As such, many people choose to get Mortal Kombat tattoos as a way to show their appreciation for the series. These tattoos typically feature characters or other elements from the game and are often used to represent courage, loyalty, honor, and strength. They can also symbolize a person’s love for the video game series itself. No matter what meaning you choose to assign to your Mortal Kombat tattoo, it is sure to be a powerful reminder of why you chose it in the first place.

What are the most popular Mortal Kombat tattoos?

Some of the most popular Mortal Kombat tattoos include depictions of characters and symbols from the series. Popular characters to get tattooed include Sub-Zero, Raiden, Scorpion, Liu Kang, Johnny Cage, Shang Tsung and more. Other popular motifs include the dragon logo from the game’s intro sequence and other abstract designs such as kombat swords and fireballs. Additionally, many fans opt to get tattoos of the game’s signature “Fatality” move, often depicted as a red skull with crossed swords. No matter what design you choose, your Mortal Kombat tattoo is sure to make a bold statement about your love for the series.