10 Best Moose Skull Tattoo Ideas That Will Blow Your Mind! 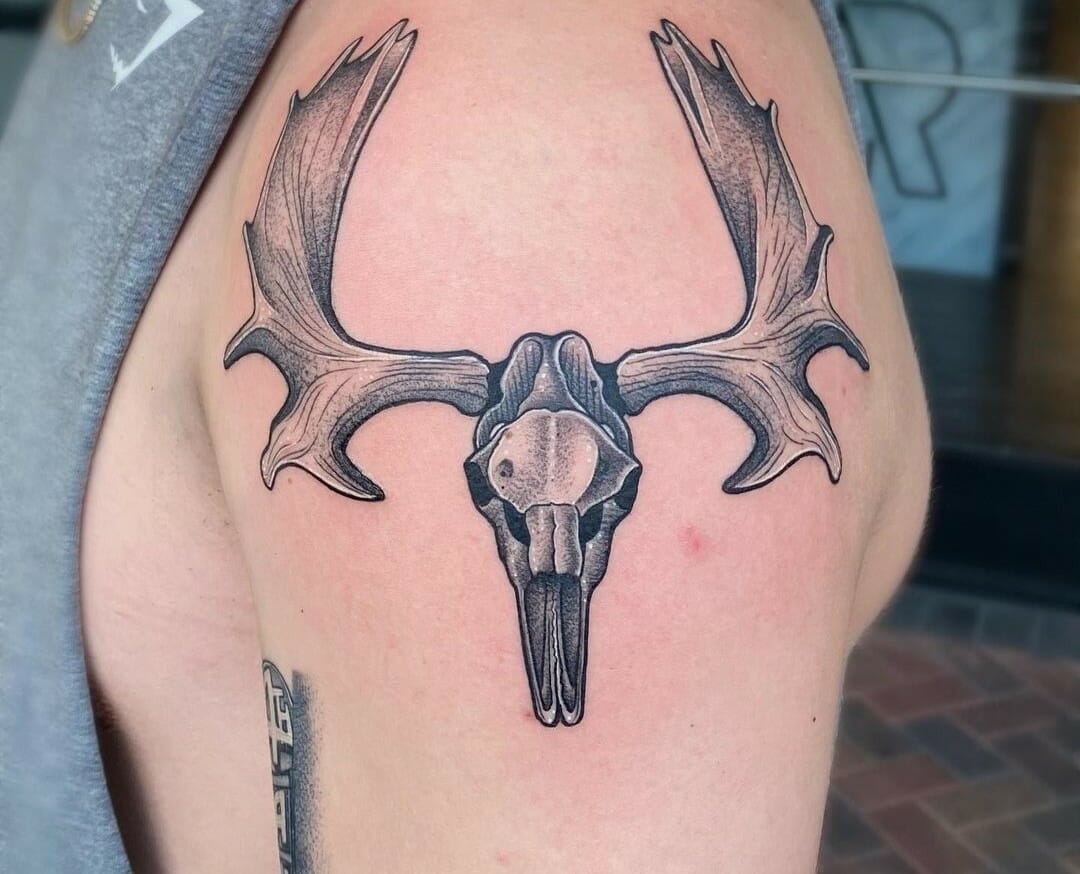 Moose are very impressive animals and play an important role in nature, like most other species.

There are a few things that make moose stand out though, especially their enormous size and how majestic they look. There are very few animals that are as cool as this gigantic beast.

One cannot truly imagine how large these majestic creatures are till they see a moose in real life. Even though they are insanely strong, they are very composed and remain calm in most situations. However, if they are angered, they can become very aggressive. They are also very fast and with those large strong antlers, they can cause massive destruction. One should never try to irritate this animal as just the sheer weight of their body is enough to flip a heavy car. An SUV is like a tin box for them, as there have been many cases where cars have been attacked by moose, almost making the victims feel like a hurricane passed through. Many people feel a connection with this animal, either due to the nature of this animal or because they wish to be like this majestic creature.

The moose has been used for symbolism throughout the centuries, in both tribal and developed cultures. These animals are found in the United States of America and Canada, however, family members of moose can be found in Europe as well. Their European counterparts are known as elk and look very different when compared to a moose. Moose generally do not have many natural predators and do not fight unless it is for self-defence or for territory. They remain calm in the face of danger and only attack if their life or their offspring is at risk. Moose never back down or run away once they feel threatened and remain composed even if deadly predators are around. If they feel like their family or offspring are in danger, they become extremely violent and destructive. At that point, nothing can stop them. Moose symbolises a protective nature, endurance and loyalty as the majestic beasts represent the same. Moose tattoos are symbols of guardianship and a bond with family as well.

This moose tattoo is a beautiful piece of art. The way the flowers are blooming around the antlers is absolutely amazing. For those who love aesthetic art and images, this moose tattoo can definitely serve as inspiration.

This is a very intense moose tattoo with mushroom-like structures growing from the antlers and spores inside the skull. There is also some moss, weeds and other details in the tattoo, making this moose tattoo both morbid as well as amazing to look at.

This particular tattoo featuring a moose skull has many things going on. Though this tattoo has a tribal feel to it, the tattoo portrays many modern concepts such as metamorphosis and concepts from modern occultism. This tattoo represents a lot of things such as death, change and features a symbolic moon. One can get inspired by this tattoo and create something different that will surely stand out as this moose tattoo would.

This tattoo is very minimalistic but very aesthetic at the same time. It is a very lightweight tattoo and thus, looks extremely clean.

This is a minimalist’s dream moose tattoo or skull tattoo. It is simple and does not take too much space, however, the detailing is done very well and it is extremely realistic.

This particular moose skull looks very dominating. Moose are known to be extremely strong and thus they are very intimidating creatures. These animals are known to be quite aggressive if threatened and capable of obliterating anything in their path. This tattoo is able to project that guardian-like strong side of the majestic beast very well.

This tattoo is one of the amazing examples of a colourful moose skull design. The tattoo features a moose’s skull with blue-headed mushrooms growing on the antlers and the entire tattoo is shaded minimally with almost true-to-life colours.

The large stature of these majestic beasts is highlighted in this tattoo and there is an amazing artwork of an entire landscape. This is a great tattoo if one wishes to go for large moose tattoos or tattoos that stretch from the left shoulder to the right.

This is an amazing example of another beautiful moose tattoo with the skull and antlers covered in leaves and flowers. This is an extremely aesthetic tattoo to look at. One can choose to get this kind of tattoo coloured according to personal preferences. A coloured version of this tattoo would look amazing.

This is another great moose skull tattoo with an eery feeling to it. Additionally, there is a spider hanging from one of the antlers and there are webs all around the dark antlers. The antlers below almost seem like they are shrouded in darkness.

These kinds of tattoos would impress a lot of onlookers and perceive you differently. If one likes skull tattoos or animal tattoos in general, it is a great idea to get moose skull tattoos. Moose are brave, powerful, dominating, enduring and agile, however, they are also gentle and graceful at the same time. Thus, it is due to the nature of the moose, many people choose to get a moose skull tattoo. The skulls of the moose are strong and huge. They can use their reinforced skulls with extreme power to headbutt their opponent after dashing towards them. Moose can grow up to seven feet tall and 10 feet long, so one can imagine how large moose skulls will be as well. More than anything, their skulls look majestic and powerful. Generally, a moose never gives up till their antler breaks or till they die trying. This is why moose are an excellent animal to try being more like. Many traits of this incredible animal resonate with thousands of individuals across the globe. Even if you like moose tattoo designs or skull tattoos, you will definitely enjoy this curated list of moose skull tattoos.