10 Best Moon And Sun Tattoo Ideas You Have To See To Believe! 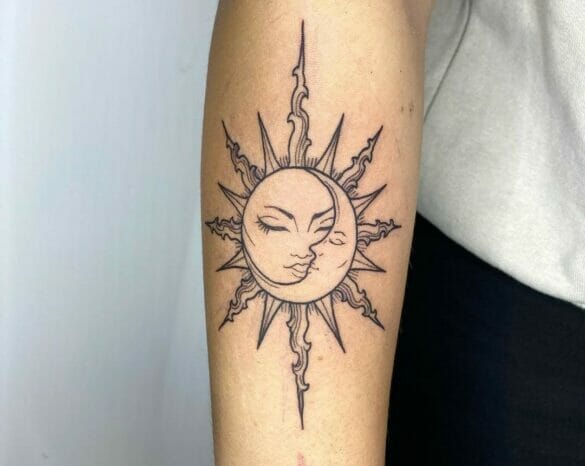 The message of a sun and the moon tattoo is to co-relate two opposite forces clubbed together as a powerful image.

There are individual meanings to each of these black ink jabbed onto the body. The symbolism of ‘hope’ and ‘darkness’ cults is a popular choice amongst individuals in these modern times.

There can be different meanings , symbolism attached to tattoos for individuals. It depends on the tattoo artist to live up to their original meaning of this body art, of sun and moon tattoos especially. Most people get tattoos done so as to remind themselves of something particularly everyday. In layman’s term to accept then warmth as well as the snow. The tattoo designs of sun and moon can be used just as a body art or could actually mean something remarkable and resourceful.

Given below are some tattoo ideas you can get to intertwine with the cosmos and the chaos within you:

Fingers Holding The Sun And The Moon

The simple way the hands are holding the sun and moon, and how their rays ignite showcases the symbol of finding peace, vulnerability , dark side and the night. The artist just went on the art over the top but giving it a finer detailed view , attached with meanings . The sun shows the slow rays’ insertion, while the moon reflects. Merging these two may incite a huge philosophical inspiration in life, in the form of body art. The fingers holding the sun and the moon express that it is all conatined within us- the fierce side as well as the icy side.

The Scenic Tattoo Sun And Moon

Moon represents femininity ,and on the other hand Sun represents rage. So, with the duality of the half moon and the Mexican sun these celestial symbols turn into great tattoo designs. One can get this tattoo on their body parts separately and also match one with their best friends – Sun on one , and the moon on another. The best feature about this tattoo is that it looks like a kindergarten drawing, with scenery including the three essentials of life – air , water and earth! It almost looks like some kid doodling sun and moon tattoo drawing on an empty page and then , representing the same on the skin via a tattoo artist. The other designs are very precisely painted on the skin , as to show the whole cosmos within it.

The Sunny Side Moon

The tattoo showcases the emergence of Moon from within the half sun, just like the yolk coming out of an egg. The pictorial view of the moon which is sleeping is a very unique sun and moon tattoo. The sun and moon tattoo meaning depends on the different cultures and lifestyles many live in. It almost looks like a drawing with the night sky coming from within the Sun, which depicts opposing powers. The detailing of the stars on a dark sky brings out the clarity of the entities and the rays glaring out of the sun , makes it an outstanding piece to embark on one’s arm.

Ancient Egypt people believed that ‘ full moon’ has the meaning of procreating among the feminine while the sun represents the light side, more with living , warmth and gratitude. The crescent moon tattoo design with its little sparks all around can stand out as a statement style on its own. The sun tattoo with its detailed pieces symbols meaning of light and rays stand as a beauty , with the flames resting on its rim. It shows fire and ice in details out in one piece. One can tattoo this on either their feet or arm , or make a statement on their backs. The bold artistic efforts put in this tattoo almost explains the pain , effort of the tattoo artist and the strength of these cosmic figures together.

The style of this tattoo might be in favour with the recent aesthetic of the Gen-Z! There is anyway a craze of the Sun and Moon tattoo, where the Moon represents the dark side and the minimalist sun represent finding peace. The way these two bodies are collaborated might turn out as a fancy inspiration , to seek the inner Zen goddess. The two symbols of both the sun and the moon phases sits like two opposing forces to remind the artist that there is always a silver lining.

The tattoo session over this one might take prolonged hours , but will leave others spellbound once they see it. This particular body art may suit best on the feet , where it showcases the individual art of the tattoo sun and moon. The moon looks like an old philosopher in the Greek history , showing the symbol of composure and beauty in the night time. The backdrop of the dark and starry sky too remind us how beautiful the nature is. The Sun on the other hand represent a very frowny and crinkled . The rays illuminating from both , and little pieces of both the moon and the sun in each other shows a symbol of rebirth , like a spiritual regeneration.

Comic Sun And The Moon

Amongst the other moon and sun tattoo , this kissing sun and the moon symbol puts the comic relief in the spiritual meaning of life and nature. The half moon design shows calmness, beauty, nurturing and on the other hand the sun shows firmness, strength and power . This looks feminine but can be suited to any gender, depends on how the person carries it. The dainty tattoo design might reminds us of fairy tales and how life is meant to be, one day at a time, and the favourite of all – You Only Live Once!

The artist intricately puts the fierce goddess in this Tribal tattoo. In many cultures a sun tattoo has the meaning to find the relation between the sun and the living life on Earth. The rose gold shade and the feminine facial style in this tattoo are equivalents to the symbolism of good luck , especially on the female side. There can be different meanings as to Sun , male or female but a tribal tattoo is done to remind us to stay close to nature – our ultimate truth.

The crescent moon, depicting as it does the lunar orb at a phase in which much of it is hidden from view, is a symbol people often choose to represent their dark and mysterious side. The flowers resting on the foot of the crescent moon represent in style the renewal . In Greek mythology, crescent moon is used as a symbolism of feminine goddess and empowerment, a concept of rebirth. The artist might draw anything depending from roses to tulips. For anyone starting afresh, this tattoo design shall be a graceful one to embrace. The opposing forces create a duality to look up to, which further excels the list of the moon phases tattoo.

Ace of Sun and Spades of Moon

The sun in tarot cards is supposed to represent satisfaction, containment and happiness. It is depicted as the best positive card in the whole deck for it aligns with ‘all things bright’. The moon in tarot cards depicts illusion , uncertainty , confusion and lack of clarity. On the Venus Goddess’ side, the sun tarot is to bring fulfillment , joy and chastity in the relationship whereas the moon tarot is the representation of cadence of time , along with endlessness . Psychics believe that it’s a sign that there’s an important dynamic between two major opposing powers or major life revolving psyches at work.

A classy tattoo idea would be to get a simple outline of the sun and the moon , on the finger. If one does not want to create a big pomp out of the tattoo , then a finger tattoo would be perfect. It does not alter the meaning of the tattoo one is getting but makes it better unique , as it is quite popular these days and is also less painful and easier to hide if required for any safety reason.

An ideal cost of tattoo would generally depend on the length , size , inches and the quality and mainly on the tattoo artist. While getting a tattoo one must have an avid research on the topic of tattoo they are getting , along with the aftercare and the pros and cons. It is always advisable to get any tattoo from a renowned licensed parlour or tattoo artist so as to avoid any fuss afterwards. In conclusion, one can ink themselves anytime and anywhere but given above are few more popular sun and moon tattoo design so as to make the tattoo more memorable. The basic sun and moon tattoo design goes a long way , but if you want it more meaningful , attractive , looking like its got a story to tell you can club the sun and moon tattoo with different elements of nature , like flowers , stars or just any simple doodle.

Suggestions to tattoo apart from the stated above:

1) Sun and moon mandala at the back of your neck.

2)Kissing sun and moon on your forearm or arm.

3)Matching Sun and Moon tattoo with your bestfriends

4)Basic drawing sun and moon on either wrists.