101 Best Minimalist Lightsaber Tattoo Ideas That Will Blow Your Mind! 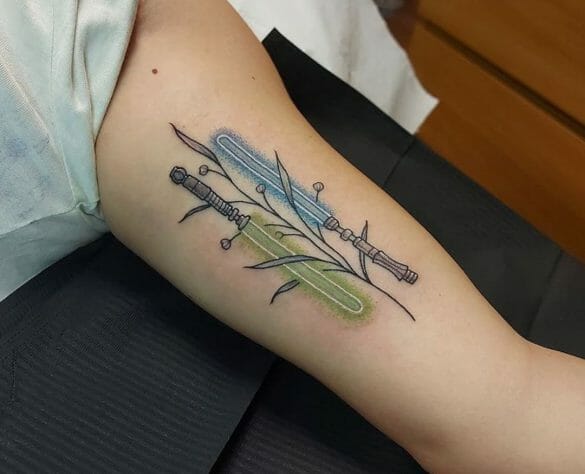 Are you part of the star wars fandom? How does a minimalist lightsaber tattoo sound? Time to discover some small star wars tattoos for inking inspiration!

Do you have what it takes to be a Jedi?

Even though having a real lightsaber would have been so much cooler, you get to draw this lightsaber tattoo out anywhere you go, since it is literally on you. Star Wars notwithstanding its age as a franchise, is constantly in vogue.

New generations have constantly discovered it, to the result that it is a part of pop culture. From Boba Fett to Chewbacca, many memorable characters are part of the pop-culture lingo even today. The question then is, why is Star Wars so popular, even beyond their dedicated fandom. Apart from conveying meaningful messages throughout their plotline, Star Wars revolutionised the way movies were thought out in Hollywood in terms of both aesthetics and narrative. If you also love Star Wars, with these star wars tattoo ideas, you can pay tribute to the legendary movies.

Yoda, the legendary Jedi Master had much wisdom to offer, while baby Yoda is celebrated more for how cute they are. In the tattoo, a chibi figure is found. It will warm the hearts of those who like goofy things. To keep it in the simple cartoon style, not much attention has been paid to the features of the face, except two little dots for the eyes. If the pointy little ears were not enough of an indication, the baggy robes that Yoda always wore make it obvious who the character is. They hold a green lightsaber tight in their hands. The green indicates a Jedi Consular, who would rather use their intellect to focus on the mysteries of the Force, to fight back against the dark side at its very core.

When you cannot choose, why not have them all? This tattoo allows anybody to proclaim their love for all three fandoms, name, Harry Potter, Star Wars, and Lord of the Rings. The tattoo chooses a minimalist representation of all three fandoms. The Narsil sword from Lord of the Rings, and the elder wand from Harry Potter are two of the three important elements in this tattoo. The last one is. a blue lightsaber. Together, they truly form the holy trinity for a Geek. Even if the tattoo is otherwise simple, you need skilled hands to nail the details of this cool tattoo.

Be loud and proud with this one of a kind lightsabers tattoo. When choosing a particular color to suit your personality becomes too hard, having as many as possible is the right path. Lightsabers in different colours already existed in the Star Wars world. This tattoo brings them all together in a symphony, depicting the colours in adherence to the Pride Flag. Another impressive thing to note about this tattoo is the cool lightsaber designs. Intricate details on the design have not been spared. The handle of each lightsaber is true to the original design, taking the inking game up a notch.

Have eyes for the rarest of them all? This dark saber tattoo practically screams that. Fans would surely know, this is none other than the first even Mandalorian’s dark saber to be taken into the Jedi order which made its appearance only once. That is what makes this saber so very unique. It is stronger than lightsabers. On top of that, as a quirky twist, this saber is all knotted and tangled. The great plus point of this tattoo is, the minimalistic pattern will not require a week or more to be complete. A simple day should more than suffice.

Until the very end, the shared truth between Darth Vader and Anarkin does not get revealed. This tattoo shows both sides of the coin and in a way, shows how a person is sometimes compelled to do something. Anarkin was supposed to be the chosen one to bring balance, and the sign for that is indicated by having the glow of the lightsaber divided into colours of both sides of the force. The quote written on the tattoo tells how a person chooses their destiny. The vibrant colours fill in the spot entirely, and therefore, can work as a coverup tattoo.

This tattoo captures a very important scene from Empire Strikes Back in a minimalist style. Instead of showing the characters themselves, the tattoo only has two quotes spoken by Han Solo and Princess Leia. If simple star wars tattoos for couples had a picture, this would be it. Another impressive little addition to this tattoo is the neon effect, where both the lightsabers glow under ultraviolet light. As long as you are efficient with your planning, you can have a fun-filled date in your next inking appointment.

Green lightsabers have been wielded by only some of the most awesome people, including Master Yoda, Luke Skywalker etc. As already known, these are the choice of weapon for the diplomats and are considered to be quite strong with the Force. The intricate features of this lightsaber, even though it is in the comic book style, are carried out with great skill, not forgetting even the little red button.

The fun tattoo conveys various ideas with a simple design. The symbol of the tattoo is roughly in the shape of the Jedi Order symbol, which is one of the 5 symbols in Star Wars. In the centre of the symbol, the structure has been thickened to resemble a lightsaber. With the splash of blue on the symbol, the idea of the blue lightsaber is nailed. With a simple sketch, this tattoo combines a watercolour effect to complete the picture. Because of the small size of the tattoo, you can have more freedom with where you want to get inked, like the neck, or your ankle.

This sleeve tattoo speaks volumes with the picture. One look at this tattoo reminds us of all the secrets, Han Solo being Leia’s brother, to the dark knight being her father. With the icon of the Rebel Alliance in the background, the tattoo is divided half into two different individuals. The entire tattoo is done in the dotwork style. The benefits of shading are applied on the tattoo, making the best use of that grayscale. With the highlighting effect on the tattoo, the details look more realistic.

Flowers In A Lightsaber Tattoo

This is an interesting approach towards the same lightsaber star wars tattoos. Instead of the glowing light which could cut through almost anything, this lightsaber has flowers growing out of it. Keeping the vibe of the lightsaber intact, the flowers have a blue aura. Micro realism is used on this tattoo, making the tattoo stand out.

We hope with all the different tattoo designs, you can find a lightsaber that suits you. May the fourth be with you!

Fangirling over Star Wars can never be enough. So, we have some more suggestions to add to the box of unique ideas: