101 Best Minimalist Anime Tattoo Ideas That Will Blow Your Mind! 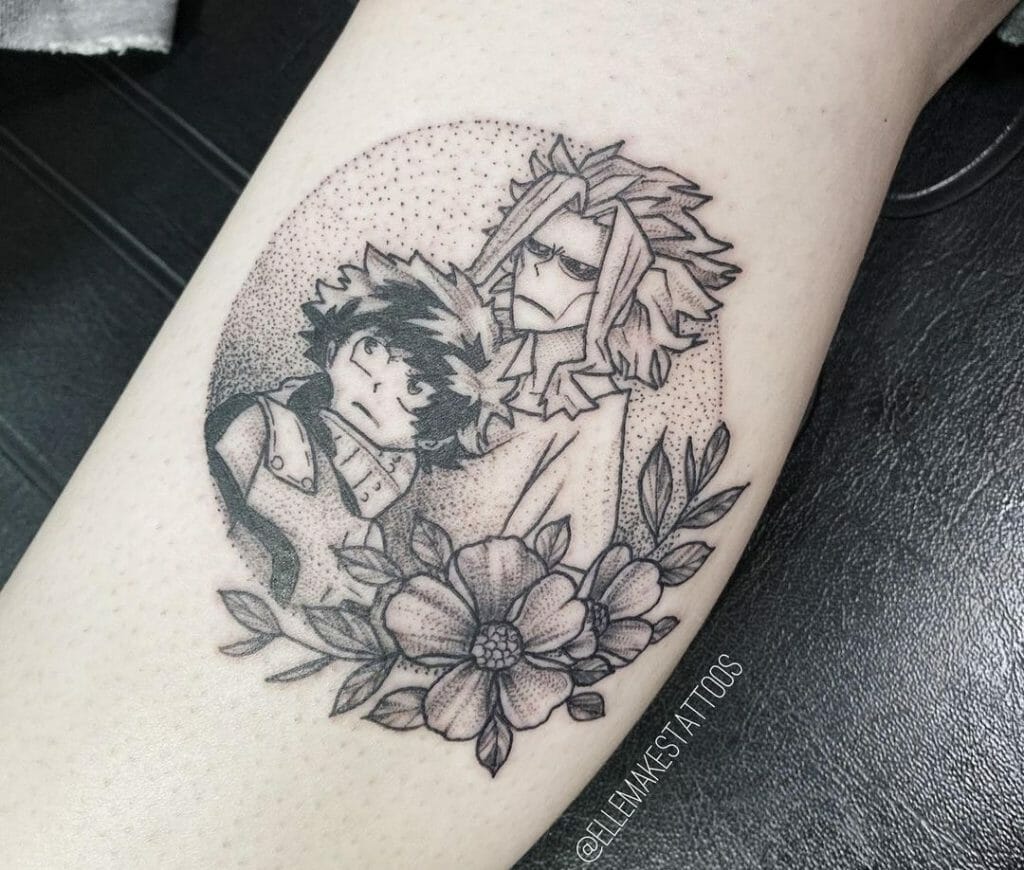 Animes are very popular right now and if you are an anime fan looking for some sick minimalist anime tattoos, we have all the ideas you need right here.

Animes are one of the most popular forms of media right now.

An anime is basically a Japanese cartoon series with amazing storyline. The art style of animes are also very popular.

Many people all over the world obsess over Japanese manga series and animes. There are a lot of animes out there and fans love to gobble them up any chance they get. And the reason behind this is not only the fascinating storylines of these animes but also their amazing art style. One of the other reasons behind the popularity of anime is the vast choice it offers to the anime lovers. You can literally find an anime based on any genre of your choice. With the bustling popularity of anime, it is no surprise why people love getting anime tattoos. But if you are afraid of getting very large or colourful anime tattoos, we have got you covered. We have collected some of the most amazing minimalistic cool anime tattoo designs for you. And we hope you find your tattoo inspiration here.

Naruto is one of the most famous animes of all time. It is one of the top three animes of all time and has a fanbase that comprises people from all over the world and also all age groups. Even though it is a shounen anime meant for teenagers, a lot of adults enjoy this anime too. With this kind of a fanbase, it is no surprise that Naruto tattoos are also very famous. So if you are a Naruto fan a well, this tattoo idea is perfect for you. The tattoos show cute, minimalistic drawings of two of the characters, Kakashi and Naruto. But you can get tattoos of any character you like.

Much like Naruto, Dragon Ball Z is also a timeless classic in the anime world. Young people, especially kids love this anime. And adults who grew up watching it still love it a lot. If you are someone who grew up watching Dragon Ball Z and still cannot get enough of it, this adorable tattoo of the main character Goku is just for you. It depicts Goku as a cute ghost and will look great on anybody and on any part of your body. The tattoo style is also simple and minimalistic if that is what you are going to go for. This tattoo is done in black and grey, but you can also have it coloured if that is what you like.

Sailor Moon is an anime series that kids and adults alike still love even though it came out in the early ’90s. Many kids of this era grew up watching it and have sentimental values attached to this amazing show. There are many characters in this anime and the art style is also fantastic. So it comes as no surprise that people love to get tattoos of this anime. So if you are also looking for a cute, minimalistic Sailor Moon tattoo, then this idea is perfect for you. You can also choose to get any of the Sailor Soldiers or your favourite character if you like. You can also get any other anime character done in this cute, minimalistic style if you want.

Cowboy Bebop is also one of the classic animes from the ’90s. Starting from the art style to the story, everything about this anime is amazing. It is a science fiction anime that has some amazing characters like Spike Spiegel and Faye Valentine that fans all over the globe love to this day. Spike Spiegel is also one of the most famous ’90s anime characters of all time. So it is no wonder that people love getting tattoos of this very cool guy with an amazing hairstyle. If you too, are looking for a cool and minimalistic tattoo of Spike, then you are at the right place. This small but amazing tattoo of Spike Spiegel is just what you need. You can also get a tattoo of another character. Just talk to your tattoo artist beforehand and have them design the perfect tattoo for you.

Even if you are not an anime fan, you have probably heard about Hayao Miyazaki’s Ghibli studio and the amazing anime movies that it produces. Kiki’s Delivery Service is one of the most beloved Ghibli movies of all time. This tiny and colourful tattoo of Kiki is perfect if you are looking for a sweet and minimal Kiki tattoo. The illustration is very subtle yet detailed at the same time. Even though it does not show her face, you will not have any problem identifying her. You can also get similar tattoos of other beloved Ghibli characters like Howl, Sophie, Totoro, Princess Mononoke and many more. Just tell your artist what you want and they will create the perfect tattoo for you.

One Piece is the longest running anime series of all time with an episode count of 998 and running. It has been going on since 1999 and has accumulated millions of fans all over the world. Much like the other classics, this anime too has many characters and a very cool art style that the fans love. So if you are an anime lover that loves One Piece, then we have the perfect tattoo idea for you. This minimalist tattoo shows the three swords of the character of Zoro who is one of the most famous characters of this anime. He wields three swords at the time of combat and is one of the most beloved characters from this anime series. You can also get minimalist tattoos of other important symbols from this anime, one of them being the protagonist Luffy’s hat. This tattoo is perfect for any One piece tattoo fan and will look great on your upper arm or your forearm.

Death Note is one of the most famous horror genre anime of all time. This psychological thriller anime series has gotten many fans across the globe even though it is not very long. The characters of Light Yagami, L Lawliet and Ryuk are probably the most famous amongst fans. This minimalist tattoo only shows the hands of Ryuk and Light exchanging the Death Note book and an apple. But the fans will understand at a glance what this tattoo is about and that is the beauty of it. Even though it does not feature the actual characters, it is very clear for the fans where it is from and what it means. If you also want a horror anime tattoo, then this idea is just what you need.

Demon Slayer is one of the most popular new age animes. The art style of this anime is so epic that people cannot get enough of it. Anime lovers all across the globe get Demon Slayer tattoos all the time. This tattoo shows two pairs of eyes featured on the person’s two thumbs. It is very minimalistic yet detailed and fans will understand in a moment where they are from. But if you are going to get a tattoo like this, remember that such designs are very hard to make. You can also get a slightly larger version of the tattoo on your wrist and it will still be amazing. This anime also features some symbols that you can get minimal tattoos of.

Even though it only released in 2020, Jujutsu Kaisen has taken the world of anime by a storm. The visulas of this anime series is stunning and the character designs are also breathtaking. It is no wonder that people are in a hurry to get Jujutsu Kaisen tattoos. But if you are not a fan of exaggerated, large pieces, do not be disheartened. We have the perfect tattoo idea for you. This tattoo features a particular hand movement that a character of the anime uses. This tattoo is very subtle but any fan of the anime can tell in a glance what it means. There are some other hand signs and symbols in this anime that also make very subtle minimalistic tattoos. So if you are a Jujutsu Kaisen fan, we hope this tattoo is a perfect match for you.

Haikyuu is the most famous sports anime of all time. It is about volleyball and players, non-players alike adore the story of a nameless team gaining fame. This tattoo features the character of Hinata Shoyo who is the protagonist of the anime. The style of this tattoo is simplistic and wholesome. You can also choose to get a tattoo of any character you want. You can also get one of the simpler manga panels done if you are a fan of the Haikyuu manga.

Did not find your desired anime tattoo designs in the list? Well no need to panic. We have some more cool minimalistic anime tattoo ideas for you to find inspiration from. Hopefully you will find your perfect tattoo style in them.

What is a minimalist anime tattoo?

A minimalist anime tattoo is a small, discrete tattoo featuring an anime or manga character. These tattoos are usually simple line drawings or black-and-white portraits, and are often placed on the wrist, ankle, or behind the ear. Minimalist anime tattoos are a popular choice for first-time tattooees, as they are relatively low-maintenance and can be easily covered up if necessary.

How do I take care of my minimalist anime tattoo?

As with any tattoo, it is important to follow your artist’s aftercare instructions carefully. In general, you will need to keep the area clean and dry, and apply a light layer of petroleum jelly or Aquaphor to keep the tattoo from drying out. Avoid scrubbing or picking at the tattoo, and expose it to sunlight only sparingly, as too much sun can cause the colors to fade.

What are some of the most popular minimalist anime tattoo designs?