10 Best Medusa Tattoo Ideas You Have To See To Believe! 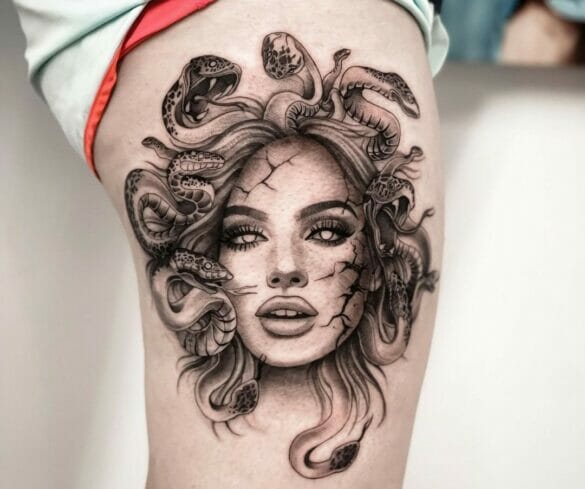 Medusa Tattoo symbolizes power and also poses as an evil eye to many people.

Medusa was one of three sisters in the Gorgon family (snake-haired), very beautiful yet different from her family, as per Greek mythology. Later she transfigured into a hideous creature with venomous snakes as her hair.

After Medusa was wronged in the Temple of Athena, the Goddess cursed Medusa and transformed her into a monster as a punishment. Medusa was a beautiful woman, and she paid a huge price for it. Medusa’s beauty is known to be hard to resist even after turning into a monster. It is believed that a single gaze from her could turn any human to stone. As a tattoo, medusa is shown as a decapitated head, inked in bold styles as a symbol of feminism.

This feminist symbol is depicted in many styles and eye-catching designs. It represents powerful women, who may have been wronged, but have always returned stronger. Some of the placement suggestions for Medusa tattoo ideas can be a Medusa sleeve tattoo, Medusa chest tattoo, and a Medusa hand tattoo.

Want to explore a medusa tattoo that is meaningful to you? Read on to find the best Medusa tattoos!

According to ancient Greek myths, Medusa was associated as the power that fights off darkness. That’s one of the reasons Medusa tattoo designs are common. People like to permanently carry this symbol to protect them from any threats. The shading in this tattoo has created quite a contrast. The snake-haired design on the left is dark and lighter on the other side. One of Medusa’s eyes is hollow. The black and grey ink style adds a faded and solemn look to the tattoo. In contradiction to darkness, Medusa also portrays a fair-faced mortal woman whose beauty can be enchanting and dangerous. You can flaunt this small Medusa tattoo portrait on your forearm or wrist.

Tattoos are still prohibited in many workplaces, but now people have started to embrace this beautiful art. Nowadays, Medusa tattoos are so in trend. Monster, snake-haired, hideous face are the names given to this female power. Medusa tattoos are very classy because it provides a sense of control and it is very appealing. Medusa showcases the feminine energy, but it means different to different people. This tattoo is drawn in thick black outlines with no solid fill. The arm is the best place to showcase this feminine power.

Fine line tattoos are perfect for medusa tattoo designs as they look clean; otherwise, if made neatly by the tattoo artist. Around the elbow is where the needle pinches a lot because it is a bony area and needs to be protected. Despite its negative impressions, people prefer this tattoo to acknowledge and showcase feminine power. It showcases the intense ability of womanhood. Fine line medusa tattoos are common among Greek mythology enthusiasts.

If you are looking for a realistic Medusa tattoo that truly reflects the beauty and danger she possesses, then you will love this one! This beautiful Medusa tattoo highlights her striking facial features surrounded with snakes crowding around her face. The snakes’ eyes, scales and poisonous feet are depicted in a lot of detail. Medusa’s hollow, white eyes counter the snakes’ vicious eyes. Majorly in black, grey and white ink, this snake-haired tattoo captures it all!

A Medusa tattoo meaning as depicted in Greek Mythology is that of a hypnotising beauty who was turned into an ugly monster by the Goddess Athena. Medusa was cursed to turn anyone who laid eyes on her into stone. People often get this tattoo not because they are of evil personalities, but because they want to make people realise that evil exists. In the modern sense, it can be used as a warning sign. This tattoo covers the entire forearm, from the wrist to elbow. Known as a sleeve tattoo, it is the best tattoo placement for a bold and colourful piece of body art. Blackwork tattoos are often spiritual, realistic and make for some of the best arm sleeve tattoo designs.

The palm of the hand is an appealing placement choice as if offers maximum visibility and make any design stand out. Especially, a clear design like this! This simple Medusa tattoo shows her wearing a crown of snakes. In this particular palm tattoo, we can see that she is portraying a dangerous and venomous woman. It shows the punishment Athena bestowed on Medusa for “breaking her promise of celibacy”. It is a common interpretation that it was Athena’s anger masked her jealousy towards Medusa.

Getting a tattoo is always painful, but numerous nerve endings in the palm and fingers make this more sensitive and painful. An important step is to clean your hands before getting hand tattoos. You should remove the bandage within 2-4 hours after getting a tattoo.

This half sleeve tattoo of the snake-haired Medusa has a minimalist design above the elbow. This particular tattoo does not have any facial features, just an outline and hands playing with the snake hair. It portrays a simple girl living in the big world, but may be dangerous if you cross her. Without any facial expressions, the artist has outshone everyone with this simple piece of art.

There are some meanings that we can draw from such Medusa tattoos, like strong personality, a bold woman, snakes representing birth, death, and rebirth, and also transformation. There is something very innocent about this tattoo. She is quite beautiful, yet she has these dangerous and poisonous snakes. Such simple linework tells such a strong story of a goddess turned monster.

The minimalist design has a modern feel to it. We see Medusa caressing the snakes with her hands, playing with them. It shows that she has found peace and strength after enduring this curse. She is now empowered and has harnessed the powers she was cursed with. If you want to reflect this sentiment in a tattoo of Greek art, this is the best design for you!

This tattoo is perfect if you believe in evil. The evil and dangerous Medusa is reflected here in an optical illusion style tattoo. The design can put you in a psychedelic trance if you stare at it too long! In green, red and black ink, this tattoo has two sets of Medusa’s eyes, lips and snake hair, one below the other. The only difference is that one pair of eyes is looking at you, while the other is looking away. These eyes showcase Medusa’s wild quality and these bold colors are perfectly going with the wild side. This tattoo conveys that you can’t escape from the wrath of a woman who has been wronged. Medusa is both an elusive and cultural figure who was cursed by Greek divinities. This tattoo is not for those who are faint-hearted and this myth of Medusa is powerful folklore that has been in the saying for centuries.

The famous luxury fashion company, Versace’s logo, is the head of Medusa. The logo came from the ruins of Reggio Calabria. Gianni Versace chose this as his logo because he fell in love with this Greek Goddess, and wanted to make it a part of his brand. Versace’s logo symbolizes strength, beauty, and power. Gianni Versace wanted to make people fall in love with his company’s clothes just like he did with Medusa. She highly influenced him as he grew up in Rome. Countless heirlooms from ancient Greece believe snake-haired Medusa as a symbol of protection. If you have a similar love for Medusa and the luxury brand, then you too can flaunt this Versace Medusa tattoo.

This Medusa tattoo with silver, shining eyes will appeal to tattoo lovers who thrive on fantasies. Drawn in bold lines and shading, this tattoo is meant to both shock and inspire you. Medusa’s hair is made of venomous snakes, and her gaze can turn even gods to stone. While monsters are all frightening and hideous, there are some that are worse than others. While she seems calm on the surface, she is angry within. There is pain in her beautiful eyes. She was ultimately beheaded, but she remains a symbol for female power even today. In this tattoo, Medusa’s eyes symbolize her pain and agony. This tattoo is drawn on the back of the hand and is stunning to look at!

These tattoos pay homage to Medusa and her story. Symbolizing Medusa’s evil nature, this tattoo depicts her face with blank expression and white eyes. The dark, intense tone enhances the pain, anger, and seriousness. The black color indicates the darkness within Medusa. This tattoo also shows how miserable she looks, and her vacant expressions show that she dealt with cruelty in her life. Just a single glance can make people interested in this goddess-turned monster. Depending on how you portray her, she could be either a beautiful woman or an obscene creature. This tattoo uses dot work to create light shading and has a smudges effect around the eyes and mouth. This Medusa statue tattoo is inked on the leg, but you can place it on the forearm and back as well.

Getting a thigh tattoo can be exciting, alluring and even less painful compared to other body parts. This tattoo is inked on the upper thigh and has a small portrait of Medusa’s head. Medusa is the protagonist and is neither a god nor a monster as shown in many stories and myths. Medusa was very loyal to Athena. The war between Athena, the God of wisdom, and Poseidon ruined Medusa’s life. When she visited the most beautiful temple of Athens and, Poseidon forced himself on her, Poseidon wrongly claimed Medusa as her partner forever to humiliate Athena. As he succeeded, Athena became angry, cursed Medusa and the rest is history.

People think that it’s terrible to get Medusa’s tattoo, but it is more like Medusa is the Goddess who was just at the wrong place and got cursed. Goddess Athena didn’t even try to understand her, and instead of supporting her, she cursed Medusa. She represents feminine power; everyone has their own version of stories, believing what they want to think. For some, Medusa is a hideous creature, and for some, she is a goddess of female power. Tattoos are still taboo in many societies, but there is nothing wrong with expressing yourself in this way!

Here are some more simple Medusa tattoos that might interest you.