10 Best Meaningful Spiritual Tattoos Ideas That Will Blow Your Mind! 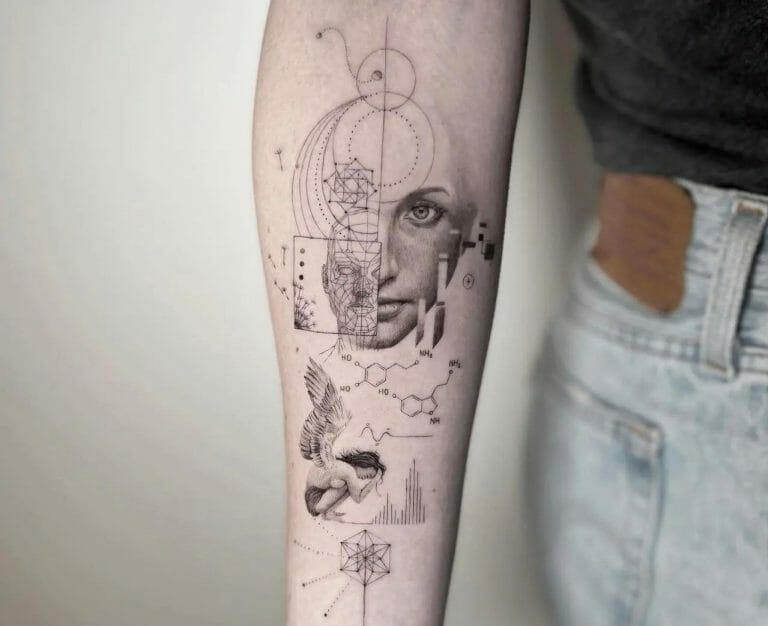 Found yourself searching for some of the most meaningful spiritual tattoos? Small but intensely meaningful tattoos? We got your back!

If self-realisation has been your thing lately, these tattoos are for you!

For quite some time now, spiritual tattoos have been a popular concept amongst tattoo artists. But if you want to learn the true meaning behind some of the most exciting and meaningful tattoos, keep reading!

Considering where our world is right now, spirituality has become one of the only things that can help us connect ourselves with the Universe that created us. There has been a rapid growth in the practice of spirituality, with a number of people leaving behind their world and starting their personal journey toward enlightenment. One of the best ways to embrace this personal journey definitely has to be through tattoos.

Spiritual tattoos can hold deep meaning beyond and can also act as a constant reminder of the chosen path. These tattoos are powerful in ways that can bring a person closer to themself. Every time one feels lost, a spiritual tattoo can help walk back into the right path. Spiritual tattoo designs can cover a wide range of mystical topics which can include religious, mythical, or some symbol that signifies something profound. These can consist of the ‘Om’ symbol, the Cross, the trinity knot, the evil eye, or something as simple yet profound as the lotus flower, the koi fish, or a semicolon tattoo. These tattoos can also include complex shapes that hold deep meanings, such as sacred geometric symbols.

However, spiritual tattoos are not confined to shapes and symbols but also include words or letters that mean a great deal to the bearer, such as the ‘fe’ tattoos. ‘Fe’ is the Portuguese for ‘faith’. Although these tattoos are really beautiful, what makes them more interesting is how they may seem just like any other tattoo but can, at the same time, hold deep meaning.

If you have been searching for popular symbols to use as a tattoo, you must have come across many signs and symbols that belong to various religions and cultures across the world to find yourself confused about which to choose. Therefore, we are here today to help you find the perfect spiritual tattoo with unique meanings to help you inspire and act as a reminder on your way toward enlightenment. Read on to find the 10 best meaningful small tattoos that can portray you as a creative yet someone closer to the Universe.

In many cultures, the lotus flower is a symbol of spiritual awakening and personal growth. Because a lotus always blooms above mud, lotus tattoos have always represented spiritual growth, rising above temptations and moving a step closer to being a better person. The lotus flower also has great significance in Hindu cultures, wherein it also symbolises purity and beauty. The spiritual tattoo featured above is a lotus flower line art with the phrase ‘you decide’ written. This tattoo is indeed customisable depending on the way you want and can also add in details that hold meaning for you and your journey.

If you wish, you can also get yourself a lotus with different colours like a white or a blue lotus tattoo inked like the one below. According to religious beliefs in Buddhist culture, a lotus in blue colour has a deep spiritual meaning associated with intelligence, wisdom, and the victory of the spirit, while a white lotus symbolises spiritual perfection.

Recalling the sacrifice of the son of the God, Jesus Christ, the cross symbol plays a central role in Christianity. This sacred Christian symbol is used as a reminder of the Crucifixion of Jesus Christ and how he loved and sacrificed for the human race. A cross tattoo is generally considered to be a representation of one’s devotion to Christianity, making it one of the best spiritual tattoo designs.

What makes a cross tattoo great is its versatility. You can always mix and match it with different styles and shapes, just like the one featured in the above picture. If you are into floral tattoos and are looking for some creative spiritual tattoo designs with meanings that go beyond the surface, this tattoo is for you! Spice up your cross tattoo with a rose vine like this one and let the holy spirit protect you from evil spirits.

However, if you wish to ink religious tattoos but do not want to straight-up imprint a cross tattoo, you can also get a bible verse tattooed just like the one below.

Historically considered a symbol of God’s will, victory, peace and, of course, love, dove tattoos are a great choice when it comes to choosing one of the best spiritual tattoos. Dove has also been featured in the story of Noah’s Ark, which represented a new beginning. An embodiment of beauty and victory, if you have been looking for a tattoo that reminds you that no matter what, there will always be hope and that good will always triumph, even on a spiritual level, a dove tattoo is meant for you! So, go ahead, inspire and make someone else’s life change with a beautiful tattoo like this.

Having its roots in the Sanskrit language, a chakra means ‘wheel’. According to Hindu beliefs, our body is constituted of seven chakras or, in simple terms, seven invisible centers which are known to carry human energy. Each of these chakra symbols represents a different aspect of our body, mind, and soul. With the first one being the Root Chakra, then comes the Sacral Chakra, followed by the Solar Plexus Chakra, the fourth being the Heart Chakra, then the Throat Chakra, Third Eye Chakra, and the last being the Crown Chakra. These chakras are aligned in a vertical line starting from the base of our spine, where the root chakra is also commonly known as the Muladhara chakra. The journey towards enlightenment involves the awakening of these chakras, making a chakra tattoo design like the one above really special. This tattoo is especially for you if you are someone who has been searching for religious tattoos to come along with you on your journey.

We’re sure you must have come across a dream catcher at least once in your life. Although, at first, these beautiful woven willow hoops might seem like they have originated out of the bohemian trend, the real story behind dream catchers stems from ancient Indian beliefs. According to the Ojibwe people (a group of North American Indians), a dream catcher is a bed charm used to help protect ourselves from bad dreams by filtering out bad dreams through its web. In order to intensify the power of a dream catcher, these people would also combine dream catchers with totemic animals. Dream catchers are also believed to help in restoring the user’s internal power and also to repel evil spirits, natural feathers, ghosts, as well as bad luck. So, go ahead and let the natural forces be your guardian with a gorgeous dream catcher tattoo like this one!

Representing the Universe comprised of a geometric scheme and structure, the Mandala is considered a sacred symbol in Hindu as well as Buddhist mythology. While externally, a Mandala is considered to be the Universe, internally, it works as a guide to different rituals that connect us to the holy spirit. The mystical center of the Mandala is made of a dot, which is also a symbol of the beginning of contemplation and spiritual devotions because it is the dot that is free of dimension. The geometrical patterns that follow symbolise the Universe and are surrounded by an outer circle that represents the life cycle. If you have been looking for powerful symbols for tattoo designs with deep spiritual meaning attached to them, you can never go wrong with Mandala spiritual tattoos. You can also incorporate these tattoo designs with other symbols to convey a creatively different meaning.

Found in the Garden of Eden, the Tree of Life is one of the popular symbols mentioned in the Bible and is known for its fruit for eternal life. However, that is not all that there is to the Tree of Life. This powerful symbol also represents personal growth and development, enlightenment and inner beauty and is often used as a metaphor for constancy, reliability, and courage. Every single detail in the Tree of Life has a spiritual meaning associated with it. The leaves of this sacred symbol are said to represent the uniqueness of every single creation of the Universe. The extended branches represent our potential for growth. The trunk of the tree represents our strength, and the roots represent our strong connection to the inner world. If you have been looking for spiritual tattoo symbols that help you stay grounded on your spiritual journey, this is something you should definitely consider on your next trip to one of your favourite tattoo artists.

Also known as the Hand of Mary, Hand of Fatima, Hand of the Goddess, as well as Hand of Miriam, the Hamsa hand is a palm-shaped amulet that depicts an open right hand. Although the evidence of the first use of the Hamsa hand dated back to 800 BC and was first used by the people of Carthage, the Hamsa hand is one of the most popular symbols amongst all religions. The Hamsa is used as a protective talisman against the evil eye and protects one from the eyes of jealousy and hatred. This symbol is also considered to be the hands of the Virgin Mary in the Christian faith. If you have been looking for cool spiritual tattoos that would protect you against evil spirits, this spiritual tattoo is the one for you.

Another outstanding spiritual tattoo design, a Buddha tattoo, will never fail you. A Buddha tattoo is generally a representation of one’s devotion to their faith. However, it can also be depicted as protection and the power to fight one’s fear. Regardless of whether you follow the Buddhist religion, you can always ink a Buddha tattoo onto yourself.

Fun fact, just like the Hindus, Buddhists also are known to have used tattoo arts extensively to embrace their religion, and you can easily find Buddhist saints with cool tattoos on them.

One of the most popular symbols around the world, the ‘Om’ symbol is widely used in Buddhism, Hinduism, and Jainism at the beginning of any chanting. The sound is said to represent the Atman (our inner self) and the Brahman (the Universe). According to the Upanishads, the ‘Om’ represents whatsoever existed, exists, and will exist, making this symbol considered to be among the most powerful spiritual symbols. If you have been looking for Hindu tattoos but aren’t yet sure which one to ink, we would highly recommend an ‘Om’ tattoo. An ‘Om’ tattoo goes best on the arm or forearm but can also be tattooed on the back.