10 Best Mask Tattoo Ideas You Have To See To Believe! 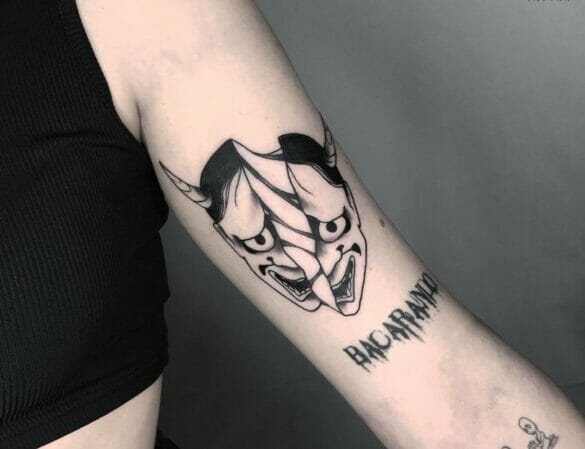 Does you looking for inspirations for a mask tattoo to reflect your love for Japanese culture? Here are 10 mask tattoo ideas for you to get started.

Japan has a rich culture, and the same isn’t any exception for various art forms.

Hannya tattoo has its roots in traditional Japanese musical theatre. This theatre known as the ‘Noh’ has been famous among women in Japan since the 14th century.

Japanese cultures sell the idea of many scary categories like demons and demonic character stories, which are complex and crazy. They believe in spirits. These spirits are not always complicated, and they can be full of peace. If you are a person with such a personality suit, Japanese tattoos might reflect you best!

At first glance, the mask might appear to be the face of a demon or malicious creature, but that is not the case. It has a deeper meaning, too. The mask was generally worn in the plays to depict women overcome with anger, jealousy, or hatred, which eventually transformed into a demon or a serpent. The mask features are a leering mouth, sad eyes, two bull-like horns, and sharp fangs. There are various types of mask tattoos to get in the world, like Majora’s mask tattoo, samurai mask tattoo, Japanese mask tattoo, Jason mask tattoo, plague doctor mask tattoo. Though the overall story and appearance of the mask may seem dark, the word Hannya in Japanese means “wisdom,” and the masks themselves are considered a symbol of good luck. An Oni mask tattoo design is used in Japanese culture and is a common tattoo choice for those who believe in good and evil forces and different power that surrounds us.

If you want a mask tattoo, this is your sign. We have listed down a few images of tattoos inspired from not just the Hannya tattoo but also derived from other aspects of Japanese culture and their meaning.

This mask depicts a red hannya mask breaking apart to reveal a woman’s face. In Japanese culture, red Hannya mask arts represent pure evil, meaning that that woman who gets to wear a red hannya mask arts has surrendered herself entirely to evil. The meaning that can be derived from this tattoo is that the woman who was overcome with anger or jealousy has been relieved of it. Hence, as the anger dissolves, the mask breaks apart to reveal her surprised expression.

This image shows a Majora’s mask in a colorful pastel form. The mask is shaped like a blue heart, red eyes, and bright fangs. The mask tattoo seems is a fresh take on the classic Legend of Zelda game mask, presenting a more modern and cartoonish result. With bright colours and not black outline, this tattoo creates a stunning effect.

This image is the most traditional version, often seen in the theatres. The artist has made a shaded blackwork tattoo, perfectly capturing the essence of every expression a Hannya mask is supposed to present. The Hannya mask can be seen wearing the cherry blossoms above the demon horns, representing her gender. The Hannya tattoo is a popular choice among many tattoo enthusiasts as a sleeve tattoo related to the Japanese mask tattoo.

The Hannya Mask And The Wave

This image draws inspiration from two primary Japanese cultural references: the Hannya mask from Noh theatre and the second one, Under the Wave of Kanagawa, a modern Japanese woodblock painting. The tattoo is made of a half mask and half-waves, inspired from the picture. It has some dark red detailing on one side and is in traditional tattoo art, with black and grey hues. This tattoo is bound to grab attention wherever you go!

Next up is the image of a pair of unique thigh tattoos. These tattoos illustrate both the popular Japanese masks oni and Hannya. The critical point of differentiation is that the oni mask represents men and is worn by men, while the Hannya mask represents women and is generally worn by them. This can be recognized from the headgear or a helmet which is usually worn by the oni mask. The head of a Hannya mask is decorated with a pair of demon-like horns. In Japanese culture, oni is considered the evil spirit of people who have died but not left.

On the one hand, oni masks are used to ward off evil, and on the other, hannya masks are used to bring good luck, countering and balancing each other’s roles. If you want a pair of mask tattoos, these designs are a wonderful idea!

This image is an example of a kitsune mask worn very commonly in Japan during festivals or rituals. Kitsune mask means a fox mask, meaning it has the features of a fox painted on it, as a fox is considered a messenger of the god of fertility and agriculture. This image has a color tattoo of a mask that is broken in half. Behind this mask, a pair of beautifully inked cherry blossoms and a teal sword can be seen. The tiny bells depicted in the image are used to ward off evil, and they jingle lightly with every movement.

The above image is another example linking to the kitsune mask. This one also shows a half-face of a kitsune mask, behind which a sword and a peony-like flower can be seen. The artist has inked red details around the eyes and the mouth, with excellent shading in the flowers and leaves. The expertly done shading work seems to give another dimension to the mask, and it seems to pop out from its surface.

Gas masks are generally associated with biological war or a plague. These masks are worn in highly polluted cities by people who want to keep the toxins and pollutants in the air away from their lungs. Gas masks also symbolize death and destruction, or warfare which tends to release toxic gases in gunpowder and nuclear release in the air, which could kill a person. These are the negative connotations, but a few positive ones which represent gas masks can mean revolution or a change from worse to better. This image illustrates a chest tattoo that runs across one pectoral. The mask in the tattoo is the one that is generally used against hazardous toxic air.

This image represents a whole sleeve color tattoo, which depicts a gas mask with beautiful shading covering the upper arm, with brilliant shades of blues, purples, and reds. Below it, we can see a sunrise, representing another beginning, or a sunset depending on the onlooker’s perspective, which could mean that dark times are to come. This tattoo could be interpreted in both positive or negative ways, as per your taste, but the colours used make it captivating to look at!

The last image on our list represents a silhouette-ish gas mask, of which only the glass part which covers the eyes is visible. This tattoo seems like a combination of blackwork and realism-style tattoo art. In that, we could see inky orange and red fire, which symbolize destruction. This tattoo is dark, representing chaos, death, genocide, and war. The tattoo artist does a fantastic work of capturing the heat of the fire in shining colors, yet keeping the background, which is the mask itself, dark yet recognizable.

Here are some more Mask tattoos designs you can check out.