10 Best Mario Ghost Tattoo Ideas That Will Blow Your Mind! 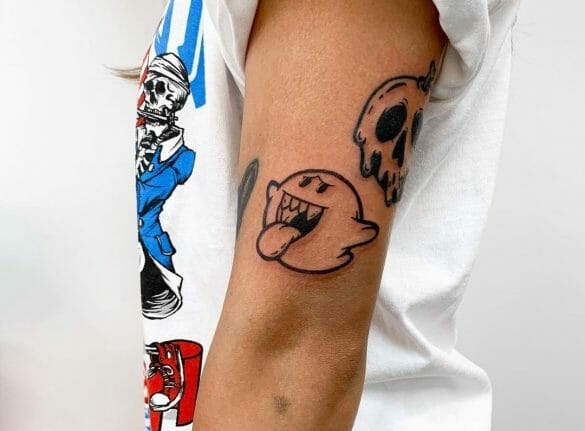 Are you a huge fan of the Nintendo game ‘Super Mario Bros’? Then here are some amazing Mario Ghost tattoos for you to check out!

‘Super Mario Bros’ is one of the most popular video games of all time.

The platform game is developed and published by Nintendo. It is also one of the best-slaling games of all time and has led to the creation of a multimedia franchise as well.

The video game follows the adventures of the eponymous protagonist Mario and his brother Luigi as they explore the Mushroom Kingdom to rescue Princess Toadstool from the villain Bowser. They move together while trying to protect themselves from falling into pits or being killed by enemies. They can also use power-ups including the Fire Flower, Super Mushroom and Starman that helps give them more strength. The game has also led to an animated TV series and a feature film.

One of the most iconic characters in the video game is the Boos who are ghost enemies. They are white-coloured round ghosts with an attacking facial expression. They are also known to stick their tongues out once they have managed to kill the player. However, these ghosts are also quite shy! They might be menacing while facing Mario but they also cover their faces in embarrassment if someone looks at them directly. Consequently, if you are on the search for tattoos based on your favourite video games or favourite characters in them, then go ahead and look at some amazing Mario ghost tattoo ideas!

The Boo Didleys are worthy adversaries and one of the most formidable enemies that players have to face while travelling in the Mushroom Kingdom to rescue Princess Toadstool. Like many other popular video games, ‘Super Mario Bros’ also has its own pesky bogeyman in the form of the Boo Didleys with their tongues wagging and globular white forms!

If you are an absolute tattoo novice and getting a tattoo for the first time, you should start with a smaller and simple tattoo design to understand how much pain you can tolerate. If you have set your mind upon a video game tattoo for your first tattoo, then you should choose a simple but cute Mario ghost tattoo.

Much like real life nuisances, the Nintendo video game ‘Super Mario Bros’ also has its own villains who are actually tiny ghosts with the most menacing facial expressions. Anybody who has played the video game since their childhood will immediately recognise the nostalgic laughter of the ghosts in Mario once they succeeded in ending your game. Seeing these ghosts with living heads pop up meant potential doom for Mario or Luigi. However, the creators of the game also gave a more fun and playful approach to these ghosts to bring out a more mischievous side. Thus, whenever someone would look at them directly, these ghosts would become really shy and hide their face in an adorable gesture!

The world of ‘Super Mario Bros’ is filled with such colourful and funny characters. Therefore, you can also opt for a full tattoo sleeve based on these characters or the Mario ghost if you want to encompass your entire arm with tattoos.

If one of your main interests in life is to play video games, then you will know about the popularity of ‘Super Mario Bros’. In this game, the Boo Diddleys or ghosts are known for jumping out of the dark and scaring the players into losing their concentration and control. Thus, if you want to pay a sweet tribute to the game, you can definitely get an adorable Mario ghost tattoo. In addition to that, these tattoos would look great on both men and women.

You can also check out some sites on the internet or ask your local tattoo artist for some ideas to see what kind of a Mario ghost tattoo would suit you.

If you want a video game tattoo, you can always choose a traditional Mario Boo ghost tattoo with the face of the adorable ghost and its tongue wagging out. On the other hand, you can also experiment with your tattoo design and choose a more unconventional and fun design as well! For example, in the above image, the wearer has created a funny mixture of Boo along with the protagonist Griffin from the animated TV show ‘Family Guy’. This might look like a bizarre combination of characters to get a tattoo of, but a tattoo like this offers a glimpse into the wearer’s wacky but loveable sense of humour. Consequently, you can also base your Mario ghost tattoo on other popular TV shows, video games or movies based on your preferences.

If you want to look at some more tattoos that are also based on popular video games, then here are the best Witcher Wolf tattoo ideas for you to check out if you are a fan of the video ame series!

The Nintendo’s namesake mascot is Mario, a brave plumber, who embarks on a fantastic journey to save the princess of his kingdom from the chief villain Bowser. In his journey, Mario along with his brother Luigi, face a number of enemies who try to put a stop to their rescue plans. One such enemy is Boo or the ghost who is quite a popular character among the fans. Thus, if you are on the search for a Super Mario tattoo, you can get a Super Mario ghost tattoo. Just like the wearer has done in the image above, you can also add lovely flowers to the tattoo. Adding the flowers will make the tattoo look more elaborate and expansive on your skin. In addition to that, the bright burst of colours will make the tattoo more attractive.

tattoo of the ghost in Mario

Rather than choosing a Mario ghost tattoo black and grey, you can also get a bright and colourful Boo’s tattoo like the wearer has done in the image above. If one of your main interests in life is to play video games, then you will have definitely played ‘Super Mario Bros’ as it is one of the highest quality video games in the world. In this game, the appearance of the ghosts or Boo is a sign of worry as they are the perfect kind of enemies who distract and subsequently kill the player. Thus, if you want to get a tattoo of this beloved enemy on your skin, you can also go for a more colourful ink palette to make your tattoo more attractive.

If you are on the search for some more wonderful tattoos based on the video game, then here are the best Mario tattoo ideas for you to see and gain some inspiration from!

The character of Boo Diddleys are quite fun and they are definitely one of the most well-loved villains of the video game. Their name is also a literal pun as they often peek through their hands when they feel shy. All the other time, they act as weird and menacing ghosts who is there to cause problems for the player. If you also relate to the anxious and shy Boo as well as the energetic and chaotic Boo, you can also wear a lovely ‘Peek-A-Boo’ tattoo with both sides of Boo properly portrayed through your tattoo. As can be seen in the picture, you can also draw each of the Boos on both your legs which is a fun and unconventional tattoo idea as well.

Tiny Boo Tattoos That Can Be Easily Placed Anywhere

The phantasmic Boo Diddleys are known for providing the element of jump scare in the Nintendo video game ‘Super Mario Bros’. By suddenly attacking upon the players and distracting them from their journeys, the Boo Didleys are one of the most beloved enemies in the video game franchise. Thus, if you are looking to get a wonderful Mario tattoo, these ghosts will be the ideal tattoo material.

You can also place them anywhere you like depending on the size and design. If you opt for small Boo tattoos then you can place them on your shoulder blade or even on the side of your body like the wearer has done in the above image. You can also choose to get multiple small tattoos of Boo with each of them portraying different facial expressions like the wearer has done.

You can also choose the top of your hand or your foot for a small Mario ghost tattoo. The size of these tattoos might be small but they will be quite eye-catching nonetheless.

Boo Diddleys or Boo Buddies are definitely one of the most fun villains in the video game ‘Super Mario Bros’. After all, they will suddenly pop out of nowhere and start to distract the player and make them fall in the pits. They also tease and taunt the players by sticking their tongues out at them! A lot of players have often fallen prey to these cute, white and rounded ghosts and their game ended right then. If you want to pay a tribute to these awesome ghosts and the iconic Nintendo video game, you can do so by getting a Mario ghost tattoo as the wearer has done in the image above. They have also added a Nintendo machine in Boo’s hand as a respectful reference to the company.

If you are a true gamer and love to play video games in your spare time, then you should also choose a tattoo that will reflect that aspect of your personality. If you love to experiment with your tattoos and have a wicked sense of humour, you should definitely go ahead and choose an adorable Mario ghost tattoo!