10 Best Mad Hatter Tattoo Ideas You Have To See To Believe! 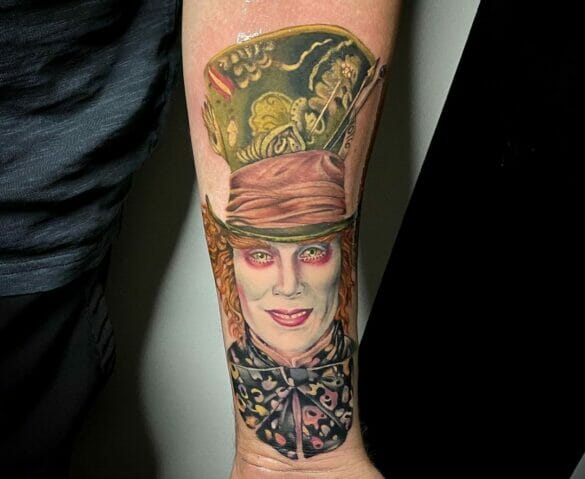 If you are looking for Alice in Wonderland tattoos or Mad Hatter tattoo ideas, then you will love the top tattoo designs explored in this article!

The story is about a young girl named Alice who falls through a rabbit hole into a fantasy world. The fantasy world consists of strangers considered mad and even human-like creatures. The audience for this story spans across age groups and is liked by grown ups as well as children.

Illustrator John Tenniel shows Hatter wearing a hat that has 10/6 written on it. The 10/6 refers to the cost of a hat. It costs 10 shillings and 6 pence. But later, it came to sign the date and month when Mad Hatter Day was celebrated.

Shortly after the world began to fade away, The Hatter, with all of the Underland’s inhabitants, were enveloped in one great blurry shadow. The Hatter leaned towards Alice and whispered “Fairfarren, Alice” in her ears. He said that his features were melting into the darkness that surrounded them. After that, he vanished completely.

Alice and Mad Hatter harbour love and affection for each other. It shows that he was happy to see her at the tea house party. He saves her from the knave of hearts by surrendering himself and Alice rescues him from the the evil, red queen. The Mad Hatter later proclaims that if he didn’t see her again, he would have regretted it.

Mad Hatter portrait tattoos are a classic design of the beloved Disney character. The Alice in Wonderland Mad Hatter tattoo is inked on the body as an homage. In this tattoo, Mad Hatter is standing in a small stack of beautiful tea cups, pouring some tea for himself. This colourful tattoo shows the whimsical character enjoying a tea party by himself. You can get a smaller version of this tattoo anywhere on the body, but on a large canvas like the back, or leg, it is sure to stand out. Along with the stacked tea cups, other ideas could be the Mad Hatter hats tattoos, Mad as a hatter tattoo, and twisted tattoo of other Alice in wonderland characters.

This striking Mad Hatter tattoo is inspired by the realistic movie adaption of the magical tale! Drawn in shades of black, white and grey, there are many elements in this original Mad Hatter tattoo. The thick, bushy eyebrows in the tattoo, around the sparkling eyes, and the slight smile add to the eccentric image of the character. The artist uses most of the white ink in the tattoo to replicate the Mad Hatter’s sharp, porcelain features and pale face. Such mad hatter designs makes for appealing arm sleeve tattoos. Of all the different Mad Hatter depictions, this portrait of Johnny Depp’s seems to be the most captivating.

This Mad Hatter hat tattoo has a card on it, labeled ’10/6′, which is the cost of the hat, ten shillings and sixpence. He was the owner of the hat store and used to stand outside the door to sell them. He used to wear one of those hats himself, and that was meant to be sold. Among the fans of ‘Alice in Wonderland’, Mad Hatter hat tattoo designs in this sketch style are quite popular.

‘We Are All Mad Here’ Mad Hatter Quote Tattoo

In his famous tea parties, the Mad Hatters often claims that ‘we’re all mad here’. This quote means that we are all eccentric in our own way and this tattoo implies that we must accept our wonderful weird qualities. The quote is placed between the hat and above a pocket watch, all inked in black outlines and grey shading. Such tattoos look great worn on the arm!

This Mad Hatter cat tattoo stars the Cheshire Cat, who is considered a guiding spirit for Alice. The cat is the one who had directed her towards the March Hare’s house. Then to the mad tea party, which led her to her ultimate destination of the garden. This colorful tattoo includes a famous quote by the Cheshire Cat of our unique realities.

Inside a card outline, this tattoo elegantly features the powerful Red Queen. Adorning royal attire and golden crown, this tattoo captures the essence of the Red Queen in all her glory. You can base your tattoo design either on the animated Red Queen or the realistic portrayal by Helena Bonham Carter.

If you want to pay tribute to the heroine of this classic tale, then this Alice tattoo is the perfect choice! This tattoo shows Alice with her hands behind her back look up at the world with curiosity. This lovely outline tattoo is done entirely in blank ink and can fit well anywhere on the body, like the wrist. This Alice in Wonderland tattoo shows our curious nature represent the nature of curiosity in a person, similar to Alice’s imaginative and robust character.

The white rabbit is portrayed as the catalyst who works for Alice’s spiritual awakening. He leads her to the rabbit hole and serves to represent her quest for knowledge. In this way, rabbit tattoos are used to describe the personal journey for enlightenment. Rabbit tattoos can be done as fine line portraits as well as colorful cartoons.

The Mad Hatter has a borderline personality disorder, which leads him to continuously changing moods. This colourful mini Mad Hatter design is suitable for any part of the body. This evil Mad Hatter tattoo represents the unpleasant side of nature.

Neo-traditional tattoo style is famous for Alice in Wonderland characters and Mad Hatter tattoo designs. Classic tattoo elements like flowers, daggers, and skulls with intricate shapes and bright colors are incorporated in this design.

If you want new designs of the Alice in Wonderland tattoos or mad hatter tattoos collection, find them here –