10 Best Luigi Tattoo Ideas That Will Blow Your Mind! 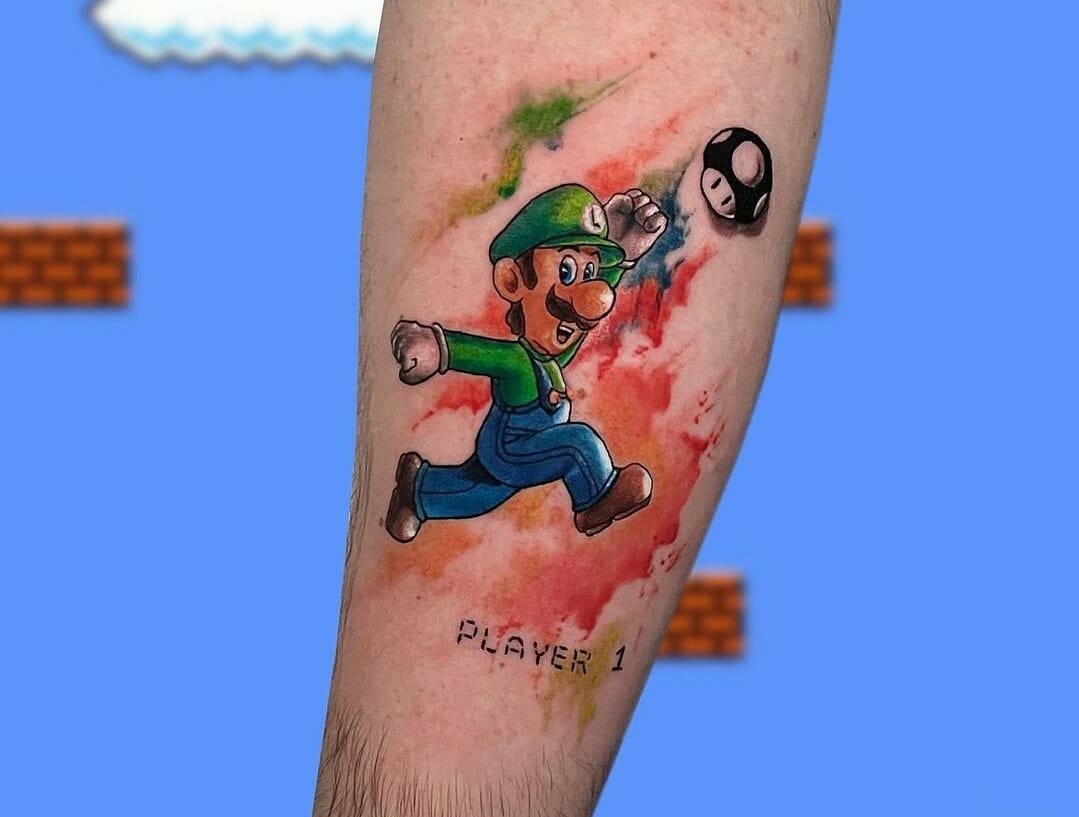 A die-hard fan of the gaming classics? The nostalgic 90s? Sit tight and watch these Luigi tattoos which will take you back to the good old Nintendo days.

As many of you know, Luigi is the fraternal twin and sidekick for our favourite Nintendo character and mascot, Mario.

For the longest period of time, Mario was the center of attention. But now, after getting spin-off games of his own, it seems Luigi has also become one of the most loved characters.

Now it seems from appearing on screens, Luigi has started making an appearance in the tattoo world too. Not that Luigi has a deep symbolism or anything, it just reminds us of the simpler days when we would come home from school, plug in our Nintendos and start playing Super Mario Bros. with our sibling. Our sympathies to the younger sibling whose controller would be disconnected most of the time. Anyways, let’s view these superb Luigi tattoo designs.

This seems like one unique take on the characters Mario and Luigi. Instead of painting them as their normal cheery self, the artist has chosen to portray them as hardened mobsters who’ve just been arrested.

Apart from an amazing colour palette, the intricate detail put in by the artist is really really commendable. The stern-looking eyes, the band-aid on the cheek and the scowl on their faces line up perfectly for a mug shot. Also, how can we forget Luigi’s glorious moustache? All in all, along with the graffiti look the artist has given with the help of the running paint, I would say this is by far my favourite.

A spin-off game with Luigi as the main character, Luigi’s Mansion was undoubtedly a hit.

This tattoo portrays Luigi capturing a ghost, and the level of detailing is mind-blowing starting from the cry of the ghost to the small green light in Luigi’s vacuum cleaner backpack. The tattoo possesses a certain 3D effect which has been achieved by keeping the size of the ghost greater relative to Luigi. The artist has nailed every aspect of the game with the air vacuum drawing the ghost in and the blue and purple electricity from the machine.

This tattoo will take you back to the days when game graphics were just a bunch of pixels. The artist has, it seems, drawn the evolution of Luigi and Mario, from pixel to pixel less. Apart from reminding us of Nintendo, we absolutely have to admit how cute both Luigi and Mario look, with their round faces, nose and moustache.

As far as the games go, Luigi is a hero. But that does not mean he’s brave.

In this hilarious take of Luigi, he is portrayed as a cowardly person, who has been scared to his wit’s end and has ended, to put it professionally, urinated in his pants. The artist has used the age-old technique of cartoon scare. White-eyes, a screaming mouth and blue sweat running from the forehead. One look at this and we can tell, “Yeah, he’s scared”. If you do get this one, I promise you, you will surely be able to make people laugh.

Quite a contrast from the previous one, this Luigi tattoo draws a brave picture of the character.

Again, taken from the game Luigi’s Mansion, this tattoo portrays Luigi as a happy-go-lucky lad,, with his glorious moustache in the limelight and his vacuum cleaner backpack in the background. The colours used in this tattoo shine bright than the other tattoo, giving it a glowing finish. To touch it up, a black background perfectly suits the theme of the game.

In this version of Luigi, instead of “urinating” in his pants Luigi is seen shedding tears. It’s up to you to decide if he is scared or paranoid, or both.

Again as before, the classic use of huge anime eyes and blue forehead sweat renders the views asking if he’s scared or paranoid, while he is busy with his vacuum cleaner trying to catch the ghosts who have captured Mario. The artist has used plain and simple colours apart from the eyes, which have a lifelike glow in them.

The bond between brothers is a sacred one, and nobody knows that better than Nintendo players.

In this work of art, the artist has managed to perfectly capture the everlasting bond between Mario and Luigi, although this is a much older version of Luigi, who is seen flaunting a jolly beard and raising two fingers, which is a reference to the Super Mario Bros. game, where Luigi was Player Number 2.

Always thought Luigi was a simple man? Well here’s a punk-ass Luigi with graffiti on his iconic L cap and tattoos all over his face, gold chain around his neck, and what seems to be like blood flowing from his mouth? Well, we never thought we’d live to see this render, but seriously it is awesome. The different colours, the spiral madness in the eyes. Kudos to the artist.

We have come across a wide variety of renditions, you may have ever seen monochrome tattoos, but now we present to you a tattoo drawn with lines only.

This is a rendition from the game Luigi’s Mansion. No colour has been used in this work of art, even so, the spaces have been filled with repeated string-like drawings giving it a unique look. Only one word comes to mind when seeing this. Masterpiece.

All the renders we have seen now was full of colour. This one, on the other hand, is somewhat monochrome, but still, each one of Luigi’s emotions is clearly readable. Even though they have used no noticeable colour whatsoever, this tattoo does not look colourless.

Well, that concludes our top 10. If Luigi is a bit too dull for your taste, you can always experiment with a Super Mario tattoo or you could try some Mario and Luigi tattoo designs. As for us, we will stick to these mind-blowing renditions of Luigi.

There were a lot of other works of art as well that sadly did not make the list, but you can always go and check them out.