101 Best Luffy Tattoo Ideas You Have To See To Believe! 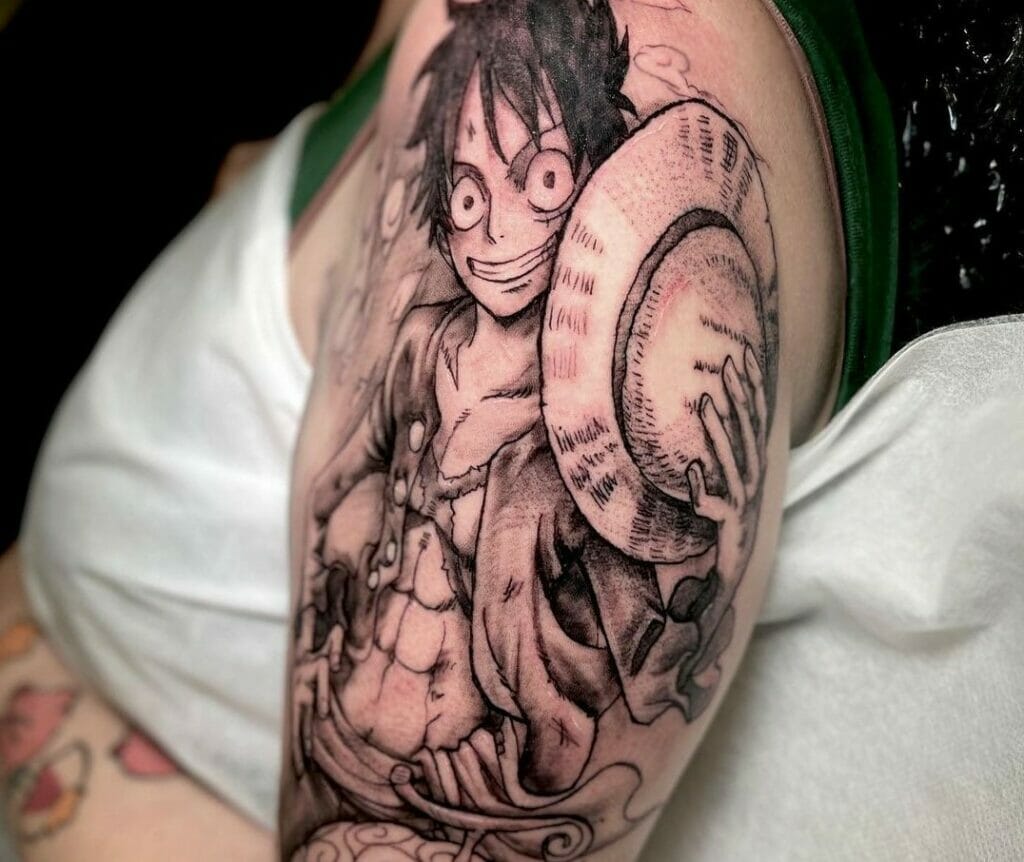 Are you in love with One Piece and can’t get enough of it? Here’s a list of awesome luffy tattoo ideas for One Piece fans!

One Piece is one of the best-selling manga series in history.

It has broken multiple records in Japan and outside of the country and also set Guinness World Records. One Piece’s main protagonist Monkey D. Luffy is the most iconic character of the series.

However, even after 24 years since the first publication, Monkey D. Luffy, the captain of Straw Hats Pirates, has not been able to achieve his ultimate goal. That goal is finding the One Piece treasure and becoming the pirate king. The story follows the adventures of Luffy and his crew members of Straw Hats. Monkey D. Luffy is a special character; he is the only person in the One Piece universe who is made out of rubber as a result of consuming devil fruit. His signature attack is gum gum pistol attack, and he is the bearer of Jolly Roger’s will. The ‘X’ mark on Luffy’s chest was caused by Akain. The first half of the series is set in the East Blue Sea. The New World is where the second half of the series sets in. Both Luffy and Ace had their own tattoos in the series. Luffy arm tattoo says 3D, which stood for three days, whereas S is crossed out in Ace’s tattoo to pay a tribute to Sabo.

A Monkey D Luffy tattoo meaning is a tribute by one-piece fans to the ultimate pirate! Check out these One Piece Luffy tattoo designs to find one that fits your style!

One Piece fans are definitely familiar with this tattoo design. Here, we can see Monkey D.Luffy impersonating Sanji, the cook of the Straw Hat Pirates. Sanji is the fifth member of the crew and is the third-highest in the crew hierarchy after Luffy and Jinbe. You can see Luffy mimicking Sanji’s habit of smoking. Due to its size, you can get this tattoo almost anywhere on your body!

Here, the tattoo artist has inked Monkey D. Luffy training in Prisoner Mine for a new power-up after getting captured. The tattoo artist has inked Luffy’s body details perfectly with his iconic straw hat behind his back. He is getting ready to land some punches and we already know of the the famous slingshot punches that Luffy does to protect his crew in the anime! You may get this Luffy tattoo inked on your wrist, arms, or leg.

The supernovas or ‘worst generation’ in One Piece refers to twelve individuals, which consists of the top 12 rookie pirates from nine different crews. The artist has inked Monkey D. Luffy, Eustass Kid, Trafalgar D. Water Law, and Roronoa, who are the supernovas of the current generation. Roronoa and Luffy are from the same crew. The perfect place for this powerful tattoo would be your arm, as shown in the picture. Manga tattoos have recently become popular around the world, especially with the story of Luffy and the straw hat pirates.

This tattoo shows us Luffy using his new technique, the gear fourth. This technique first made its appearance in Luffy’s battle against Donquixote, and he had worked on this technique while he was on Rusukaina. Luffy’s eyes have been inked in a shade of pink in the tattoo, with his right eye scar being completely visible. If you are looking to go a step further, you can integrate Donquixote’s tattoo design in this as well! There is a power symbol in the clothing of Luffy with and for crew members that the fans love.

Zoro and Luffy, one of the best duos in the One Piece universe, have been given a cool depiction here. Luffy has been inked on the right leg, whereas Zoro has been inked on the left one. Initially, Zoro was unsure of the child but later acknowledged him as his captain. Zoro and Luffy have immense respect for each other and trust each other’s decisions, whatever might be the consequence. The tattoo depicts Luffy’s signature pose before he gets ready to fight someone, and Zoro is holding his sword; he was the one who created Three Swords Style. Zoro will follow Luffy’s lead and will always be the best among his crew members.

Two supernovas in the same crew, there’s no way the Straw Hat pirates are going down without a fight! The tattoo inked here shows Rororona Zoro and Monkey D.Luffy ready to go against their enemies. This One Piece tattoo is done in all black ink with a smooth shading. You can add additional characters such as Ace into this tattoo design as well. You may get this inked on your arm.

The Captain Of Straw Hat Tattoo

Another happy Luffy tattoo! Here the artist has added to Luffy’s smile a pinkish blush under his eyes and on his nose. You can get this tattoo inked with more colors and on any body part with a smaller canvas, like the wrist or forearm.

In Luffy’s battle against Charlotte Katakuri, Luffy revealed another form of 4th gear, which is known as ‘snakeman.’ The spread of Haki in this form was not like other forms where it had spread to his shoulders and upper half of the body. The artist has inked a colorful tattoo that depicts this legendary form in this striking red, purple and white design. Luffy’s eyes and hair reflect his level of strength and aggression. You can get this tattooed on your arm or back.

The One Piece Tattoo

The tattoo showcases the different characters from the universe of One Piece. The artist has inked characters Zoro, Luffy, Macro, and Sabo on the arm. Both Macro and Sabo act as allies to Luffy at a certain point of time during the series. Macro was once a commander in whitebeard pirates. Zoro has been inked, holding his sword’s handle in his mouth while other characters seem to be in an aggressive posture.

The perfectly engineered plot of One Piece attracts readers and viewers to it. Although the series has been going on for 23 years, the author has confirmed that the weekly shonen will soon come to an end soon. Would Luffy finally become the pirate king? Only time can tell us. However, that doesn’t stop you from getting a One Piece tattoo! Check out our suggestions for your one-piece tattoos.

What is the meaning of a luffy tattoo?

A luffy tattoo is a symbolic representation of strength and bravery. It typically features a portrait of the beloved anime character Luffy from the series One Piece. The tattoo often includes his distinctive straw hat, which symbolizes his unyielding will to never give up on himself or his goals. It can serve as a reminder that determination and hard work will lead to success, no matter the odds. It can also be a representation of strength and courage in facing difficult situations or overcoming adversity. Ultimately, a luffy tattoo is a powerful reminder that you are your own hero.

How do I choose a luffy tattoo design?

Choosing a luffy tattoo design is an individual experience, and there are many ways to customize the design to suit your own personal style. It is important to remember that this tattoo will be with you for life, so it should reflect something meaningful about who you are and what you believe in. Consider all the options available, from traditional portrait tattoos to more creative designs that incorporate symbols or colors unique to your life. Talk to an experienced tattoo artist about what kind of design you’re looking for and listen to their input – they will be able to help create a one-of-a-kind design that is perfect for you.

How do I care for my luffy tattoo?

Taking proper care of your luffy tattoo is essential for ensuring it remains vibrant and clear. After the tattoo is applied, keep the area bandaged and clean until the healing process is complete. Avoid swimming, soaking in a bath or hot tub, or exposing the tattoo to direct sunlight while it’s healing. Once it’s healed, use a good quality moisturizing lotion to keep the skin hydrated. Additionally, apply sunscreen whenever you’re out in the sun to protect your tattoo from fading. With proper care, your luffy tattoo will last for many years.

How much does a luffy tattoo cost?

The price of a luffy tattoo can vary greatly depending on the size, complexity, and location on the body. Generally speaking, tattoos cost anywhere from $50 to several hundred dollars. To get an accurate quote for your luffy tattoo design, it’s best to consult with a professional tattoo artist. Keep in mind that quality artwork costs money and be prepared to pay a higher price for an experienced artist.