10 Best Lucky Charm Tattoo Ideas that will Blow Your Mind! 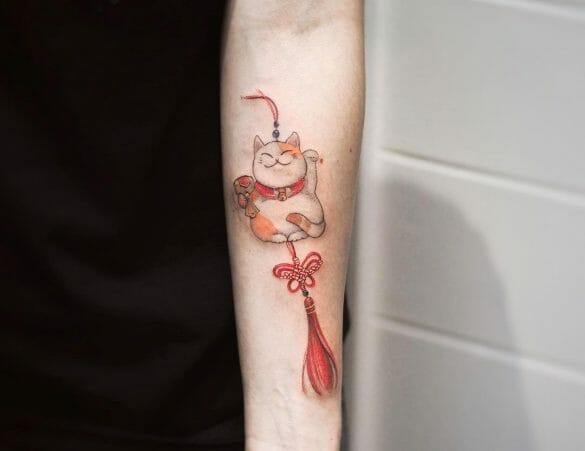 If you are looking for your next tattoo ideas, down below are some lucky charm tattoo designs that might just be perfect for you.

Tattoo ideas with meaning are often inked nowadays as a symbol of good luck and hope in life.

Good luck charms are traditionally seen as harbingers of happiness in different cultures. However, in the western world, a lot of new good luck tattoos are considered to be popular symbols of strength, believed to heighten better luck, bring prosperity and are also believed to be tokens of good fortune.

Directly different and contrasted from many evil eye charms, considered bad luck in many cultures, traditional as well as modern lucky charm tattoo meaning is primarily the same across all cultures, that is, to usher in good fortune and wealth in life, good health, good dreams and good omen. So inking a little good luck charm on the body with friends is an excellent idea. Below are such symbolic tattoos and many interesting lucky charm tattoo design ideas for you to choose from.

These particular lucky charms are believed to bring happiness and are popular tattoos symbolic of goodness. The blue snake tattoo falls among tattoos that symbolize strength and represents creative force, and is interpreted as a saviour. This beautiful ancient and traditional design inked with perfection in colours including blue, black, red and their hues is the ultimate showstopper. The size and shading of the tattoo give out a realistic look on the arm as well.

Sun, moon and flowers are many a time considered lucky charms. This beautiful and magnificent lucky charm tattoo is a popular symbol considered to bring good fortune. This lucky flower charm has two deep bases of red and black, along with tiny reddish-pink flowers inside the charm. The light red hues inside the flowers represent warm approval, respect and appreciation, while the deep reddish hues are thought to bring in love, liking and a strong mental state of peace. The impeccable inkwork, shading and gradient of the hues are beautifully expressed in the inking. In addition, the feathery danglers from the charm, along with the origami shapes inked on the top of the charm, give off a realistic oriental vibe.

Unlike many beast totems that portray crude vigour, killing and dark death, the stars, sun, moon tattoos and fish have often been the ideal representations of good luck tattoos signifying birth and regeneration of beauty. The shooting stars lucky tattoos fall under this category. Shooting stars are typically manifestations of good wishes and words of love. And this minimal tattoo does not disappoint! Beautifully etched on the skin with fine linework in black, it features a little shooting star with a starry trail left behind. Ideal for a first time inking!

Four-leaf clovers are traditionally an ancient Irish symbol believed to bring good luck and have gained popularity nowadays. With the birth of the concept of religion and god, the Celtic four-leaf clovers good luck charm was used to ward off evil spirits and bring hope, luck, fortune, faith and prosperity in life to whoever the owner was.

This minimalistic design features the lucky four leaves, where the leaves stand up as if upright, with a tiny stem. The design, although very elegant and ideal for a neck tattoo, can also be inked as a larger piece on the body. The beautifully detailed gradient work of green hues in this limited space is exceptional. Get it inked behind your ear and see your luck turn!

Number tattoos are in vogue in the present. This triple tattoo design features the number 7 repeated thrice and is an example of a good luck charm for the future. The number 777 is a sign of reward and fortune coming in life from the Universe. This numerological luck tattoo features the number boldly inked thrice on the arm. In addition, it will be ideal as a small, minimalistic fingers tattoo, and you can also customize it as per your choice with coloured inks.

In ancient Egypt, Ankh or the key of life, was a very important symbolic imagery. The Ankh was used to represent life and living itself, and also as powers of bringing in good fortunes and plenty. The Ankh typically features a cross-shaped design but with a small elongated eye above instead of a rectangular bar. This particular tattoo design features both the Ankh and the Eye of Ra, another powerful Egyptian symbol of protection and good luck, combined to form a lucky charm. The deep, bold black fill, as well as accurate historical representation, is exceptionally elegant in the design.

The fingers crossed tattoo in the modern day has been used as a good luck charms wish, to have faith in one’s best work and wish them luck, and success in life. These fingers crossed tattoos have now been so popular as to be actively included in WhatsApp emojis and GIFs. The symbol also is closely associated with the victory symbols with a V-shaped finger design. This minimalistic good luck tattoo aptly portrays the intended shape and design inked in bold, black smooth lines with a little star added in the background.

Among the traditional ones in Japanese culture, this Japanese lucky charm tattoo for luck and money is the most important. Also known by the common word come-come cat, with one paw raised for protection, is often said to bring good luck in life, fortune and wealth to its owners. Among symbols of good luck, this tattoo is surely a classic. The following features a cute black cat, which is, in contrast, believed to be evil and bad luck but juxtaposed with beautiful gold outlines and what seems to be a golden coin with deep yellow inscriptions. Beautiful gradient shading and realistic inking make this good luck charm tattoo a showrunner.

Horseshoe designs often represent good luck and the word success in one’s life, and it is also paired up with certain background objects like flowers, like in this particular tattoo. This magnificently huge tattoo depicts a big horseshoe with a bunch of assorted flowers gathered around it. The traditional colours of blue, brown and green along with rustic, crude looks steal the show. The beautiful design inside the luck tattoo is exceptionally inked. The pale hue adds to the visual appeal.

Although a very gory image of a rabbit’s severed foot tied around in a chain, this tattoo is said to bring good luck to the carrier. The good luck tattoo design features a furry rabbit’s foot, in a pale golden chain, with a bright red burst of rays in the background. The highlights on the golden chain with blackened, smudged ink shade and the background steal the show! Apart from this, the furry realistic feeling of the foot too is a beauty of this luck tattoo.

With a myriad of such innovative new good luck tattoos, you are about to get lucky. These tattoos feature a perfect mixture of the traditional lucky symbols, and a little bit of a peek into the western, numerological world of prosperity and wealth. With all the symbols that bring good luck, we hope you have a wonderful inking experience!