101 Best Longhorn Tattoo Ideas That Will Blow Your Mind! 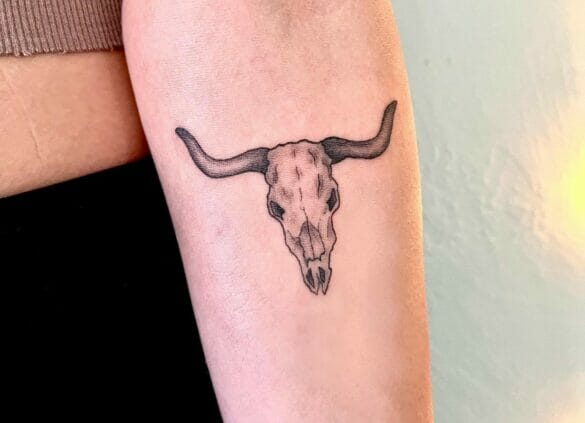 If you have an inclination toward majestic animal tattoos, then getting inked with a longhorn tattoo is a great choice. Take your pick from this curated list.

A beef cattle of American origin, the longhorn, as the name suggests, has a typical extensive horn that can reach up to 7.8 ft.

The longhorns were introduced in America around 1512 when the Spanish conquistadors came to America on their second voyage. They mostly brought these cattle to provide food to the soldiers and colonists.

As the settlements expanded, longhorn cattle reached the part of the USA known as Texas in the 17th century. Though longhorns became feral for almost two centuries, it was first the anglo-American settlers in east Texas who bred them with their cattle. They found some unique qualities like sturdiness, long legs, and especially extensive horns.

For their unique appearance and cultural value, recently, they have become quite popular in the tattoo industry.

The simple Texas longhorn tattoos are extremely majestic in appearance. They are mostly created by using simple lines, and then a light amount of stippling is done on the tattoo image. The lines can be either drawn with traditional black ink or with any color of choice of the tattooer.

Longhorn tattoos are both popular among men and women and are placed according to the size of the tattoo. The small or medium ones are placed on the forearm, wrist, bicep, ankle, neck, and foot, while the large ones are inked on the back, thigh, chest, and shin. People who have or want to express features like strength, durability, courage, and toughness often get longhorn tattoos inked on their skin.

The symbolic bull skull tattoo is popular all around the world and has important cultural values. But when done with the sign of elongated horns, it can be easily understood that the tattooer wants to express that they have inked it as a longhorn symbol tattoo. These animal tattoos are popular among both men and women.

With this Texas longhorn tattoo design, the tattooer wants to represent the characteristics of agility, protection, and leadership. The tattoo image is not detailed with intrications and best blossoms on the chest, back, thighs, forearm, wrist, and bicep. Traditional black ink is mostly used to create these tattoo designs and can be shaded sometimes with brown or red color.

One of the most popular spots to get a tattoo on the body, finger tattoos are known for their crisp designs and look aesthetically pleasing. The space on the finger to draw the tattoo design is extremely less, and only an experienced tattoo artist can blossom this longhorn piece on the finger.

The tattooer with this finger tattoo can represent their love for the longhorn breed. They can also demonstrate with this design that they are the owner of longhorn cattle. Both popular among men and women, black ink is mostly used for tattooing this design on the finger. Due to the presence of nerve endings, finger tattoos can be quite painful and are not advised to people who are new to the tattoo world.

The longhorn tattoo with arrowhead is enmeshed with Native American tribal beliefs and symbols. Bull skulls were considered to provide life-long protection from natural elements, and arrows were used for hunting and protection by the Native Americans. When these two elements come together to be used as a tattoo design, they represent the protective nature of the tattooer.

The arrowhead here reflects the sharpness of the tattooer, while the longhorn depicts the courage and strength needed for protection. These tattoos are both popular among men and women and can be done either using black or colorful ink. The best site to put these tattoos is on the bicep, forearm, chest, back, calves, shin, and thigh. Objects like flowers, feathers, or beads are often combined with the design to make it more radiant.

With the availability of enough space in the backside, the longhorns in the back are done mostly as large tattoos. Black ink is used for creating this grand tattoo design, and this piece is popular among both men and women. Keeping the spine as the center, the longhorn design is created with the horns extending to the far side of the shoulder.

The tattooer with the Texas longhorn in the back reflects that they are strong in nature both physically and mentally and have great endurance capabilities, similar to the longhorns who thrive in the arid regions of Texas. The tattoo design is often ornamented with stippling, which makes it appear both majestic and soothing to the viewers.

Parts of the Chihuahuan desert lie in some portions of Texas, and the state is known for its arid weather. The extensive heat and humidity can be quite a challenging factor for many cattle to thrive in Texas. But the Texas longhorn is known for its high heat and drought tolerance capabilities.

People who can handle stressful situations and have a high tolerance mostly get these longhorn tattoos done on their bodies. The desert site with cactus, mountains, and the scorching sun is done inside the texas longhorn tattoo image to reflect the toughness they have inside them. These tattoos are done on the forearm, chest, back, shin, calves, and thighs. The ink used by the tattoo artist is mostly black for this design.

The foot is a place that is mostly covered with socks or shoes, and the skin is not visible to everyone. People who are mostly shy or introverted get longhorn foot tattoos. They are selective about showing their body art, and the tattoo size ranges from small to medium.

The foot longhorn tattoo demonstrates courage and tolerance and is popular among both men and women. Black ink is commonly used for this design. Experienced artists can blossom longhorns beautifully on foot, but it has some downsides too. First, foot tattoos fade quickly due to their contact with socks and shoes, and second, they can cause a severe amount of pain.

The longhorn Texas tattoos become quite symbolic when they are done using flowers. The longhorn breed is known for its toughness and tolerance, whereas flowers represent softness and natural beauty. When these two elements are fused for the tattoo design, they act like contrasting features and account for dualism.

A person with the Texas longhorn tattoo with flowers reflects that they possess both the features of toughness and softness in them and use them accordingly. The tattoo design is both popular among men and women and best blossoms on the back, forearm, chest, thigh, bicep, and shin. These tattoos can be either done using traditional black ink or by using colors, and it totally depends on the tattooer. Often leaves and branches are added to the design to make it more graceful.

The inner bicep is quite a unique place to get longhorn tattoos. Extremely popular among men and women, the ink choice for these tattoos is mostly black. The inner bicep longhorn can be done either as a large half-sleeve tattoo or as a small tattoo, and it totally depends on the choice of the tattooer.

Bicep tattoos were considered to be a symbol of the rite of passage to becoming warriors among many tribes. Etching an inner bicep longhorn tattoo rightfully exhibits the characteristics of leadership, courage, strength, and protection. The inner bicep tattoos are becoming popular in recent times as they are both less painful and tend to age well.

The longhorn tattoos with feathers can be associated with Native American culture. Many Native American tribes believed that the bull skull provided protection from all-natural elements. With the passage of time, a similar concept has been imbibed in the tattoo industry for a Texas longhorn skull tattoo.

The tattooer with this particular piece can reflect their protective nature along with the courage, strength, and agility of the longhorns. They can also ink this tattoo to pay tribute to their ancestors and their cultural beliefs. The best place to put this design on the body is on the chest, back, thigh, belly, and bicep. These tribal tattoos are mostly done using black ink, and objects like beads, stones, or flowers are embedded into the tattoo design to make it more meaningful.

The longhorns, which once grazed as feral animals, have now become a part of the Texas cultural heritage. Longhorns are reared for their beef and sometimes are used for steer riding.

The other tattoo designs that can be done using longhorns are:

What is a longhorn tattoo?

A longhorn tattoo is a type of tattoo typically featuring the image of a Texas Longhorn, an iconic symbol of the American Southwest. Tattoos featuring longhorns are often used to represent strength and resilience, and they can also be seen as a tribute to the unique culture that surrounds this powerful animal. In addition, many people choose a longhorn tattoo to show their love and appreciation of the Lone Star State. Whatever their meaning, these tattoos are often seen as a sign of Texas pride.

How did the longhorn tattoo become popular?

The longhorn tattoo has become popular due to its association with the American Southwest, and particularly with Texas. The Texas Longhorn was an iconic symbol of the Wild West, and it quickly became a source of pride for Texans. As a result, the image of the longhorn is often used to represent strength and resilience, as well as a celebration of Texan culture and heritage. With the rise of tattoos in popular culture, the longhorn became an increasingly common choice for body art, allowing Texans to show their pride both inside and outside of the Lone Star State.

What are some popular longhorn tattoo designs?

Popular longhorn tattoo designs often feature the full body of the animal, with its iconic long horns and distinctive black and white coloring. Other common designs include close-up portraits of the head or face, as well as abstract designs featuring a stylized version of the longhorn. These tattoos can also be combined with other symbols such as stars, flags, or cactus to further emphasize the connection to the American Southwest. Some people even opt for realistic depictions of a Texas landscape featuring longhorn cattle in their native habitat. Whatever design you choose, a longhorn tattoo is sure to make a bold statement about your love and commitment to the Lone Star State.

How can I personalize my longhorn tattoo?

To personalize your longhorn tattoo, consider adding a specific meaning or detail to the design. For instance, you could incorporate symbols such as stars, flags, and cactus to further emphasize your connection to Texas. You can also add a phrase or quote that reflects your unique personality and values. Whether it’s meaningful lyrics from a song or a powerful phrase that inspires you, adding words or phrases to your tattoo can help turn it into a truly personal statement. With the right customization, your longhorn tattoo will become an enduring representation of your Texan pride.