10 Best Lola Bunny Tattoo Ideas That Will Blow Your Mind! 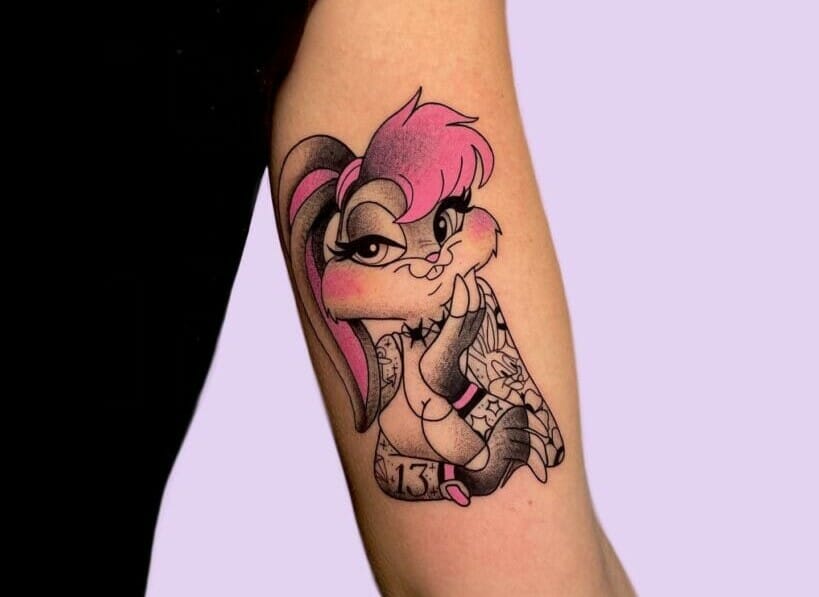 When he says “You wanna play a little one-on-one, doll?” let him know who you are as you ace your style game with these witty Lola Bunny tattoo patterns.

You are never too old for the Looney Tunes show, are you?

We do not mind if you are Bugs Bunny or his sweetheart, the sizzling hot Lola rabbit, as here are some of the most popular and appealing Lola Bunny tattoo patterns for both the bunnies. Team up with your Bugs or Lola and triumph over the miseries.

Warner Bros created the Looney Tunes humanoid character of Lola Bunny, who is introduced as Bugs Bunny’s girlfriend. Bugs Bunny and Lola tattoo patterns became popular among tattoo lovers right after Lola first appeared in the 1996 movie “Space Jam”. Although most of the characters of Looney Tunes are not at all human-like in appearance, Lola Bunny is an exception. Perhaps Bug’s cousin, Honey Bunny, who, according to some viewers, was much of a look-alike of Bugs, led to Lola’s creation being more inclined to a humanoid form.

No doubt Lola Bunny’s cropped yellow tank top and purple shorts were crazily in vogue since the late 90s and still stealing hearts and turning heads of the fashionistas even today. Ponytail-like large ears, blue eyes, and hourglass shape have made this character even more appealing.

When Bugs asks Lola for the game in the “Space Jam” movie and addresses her as a doll; Lola counters her being regarded as a doll by Bugs and states- “Don’t ever call me “doll.” and that swinging of her ears out of her face tells everything about the bold and ambitious nature of Lola and her tattoo. Lola’s humanoid shape is in no way similar to a doll, and her creator lets the drama queen spill it out of her own dramatic lips.

Are you okay, bunnies? Or do you not need a hot and bold Lola Bunny tattoo? Here are some of the best Lola Bunny tattoo patterns for you to check out and get amazed with. Let’s not delay anymore before we plunge into the quick exploration of the set of tattoos of this interesting character.

The Bubbly Lona Bunny Tattoo For The Perky Queens

Always in the mood to play around and sing your heart out? Then this happy tattoo of Lola is just what can match your craziness. This bubbly Lola Bunny tattoo from Instagram is for jolly and perky ladies.

Get to the link and take a quick glance at this fun tattoo that you might fall in love with. Lola is found to be the perky bubblegum girl in this tattoo, blowing up on a piece of pink bubble gum. This is perhaps the right avatar of the character for you to get in order to ace that sizzling-style game.

Who has not heard about the oomphy romance and love between Bugs Bunny and his girlfriend Lola Bunny?

If you are a looney tunes fan, you must have been familiar with this hot couple. Even we get to experience a glimpse of their sizzling chemistry in the “Space Jam” movie as we find Bugs saying – “Ahh, she’s obviously nuts about me.” or when Lola gives a long romantic kiss. These kinds of Bugs and Lola Bunny tattoos along with the little hearts, are just as cute as the duo.

Spice up your romantic relationship with your partner, as you can make it more interesting by engaging in activities like getting a tattoo together. So, what is the delay for? Rush to the tattoo parlor and twin up with each other by getting these Bugs Bunny and Lola Bunny tattoos.

The Cute Lola Bunny Neck Tattoo For Your Lady Love

These kinds of cute Lola Bunny tattoos from Instagram are popular because of the cute pose of the bunny as it sits by hugging her knees and resting her cute chubby cheeks on one side of the knees.

Although black and white in hue, these types of cute Lola Bunny tattoos on the neck steal one’s heart because of the cute sitting posture of the bunny. You can also try it on other body parts and ask your tattoo artist to have it done on the upper arms, forearms, or wrist. Gift your ladylove with this cute bunny tattoo or get it yourself, for this super cute design is hard to resist.

Astonishingly, this cool and swaggy Lola Bunny ink design from Instagram has got tattoos for itself. Get to the link and observe carefully as the Lola Bunny has got the tattoo of Bugs Bunny, her boyfriend, a skull, a basketball, a rose, a knife, a carrot, and her signature lines from the “Space Jam” movie- “Don’t ever call me “doll”.”

The rose and Bugs Bunny tattoo on Lola’s legs are symbols of the loving nature of the character, whereas the basketball, skull, and knife tattoo gives a hint about her funky and arrogant nature. This tattoo throws light on the versatile nature of the girlfriend of Bugs Bunny.

This design of the gangsta avatar of Lola Bunny has been quite popular nowadays. Not only tattoos, but this design has been customized and printed on t-shirts, as stickers, scrapbooks, and e-books, among others.

This gangsta tattoo of the bunny is unique, with her face covered with a purple scarf, pierced eyebrow, a tattoo of a crown on one of her arms, and her other hand holding a baseball bat. That gaze in her eyes says how cool and arrogant she is; if the gangsta Lola tattoo has been on your bucket list, this one is the appropriate one for you to own.

Those dreamy pairs of eyes, hair highlighted in pink, and those chubby cheeks and that cute pose- Bugs Bunny might have been not so wrong in calling her a doll, but if she doesn’t like it, we can just call her chubby and love her excessive cuteness.

This cute tattoo has been done on the upper arms. However, you can get this one customized and ask your tattoo artist to sketch it on your leg, shoulder, or forearms and use this tattoo to show off your fascination with the Looney tunes.

The Hot And Appealing Player And The Lona Bunny Tattoos

In this tattoo from Instagram, Lola Bunny poses as a hot and appealing basketball player with her purple towel and basketball game attire.

We love the confident and carefree look on her face as she stands posing with her towel holding it around her neck with her perfect hourglass-shaped figure. If you are a player or have always been a fan of Bugs Bunny and his girlfriend and the “Space Jam” movie, we assure you it is time for you to get this appealing design inked.

This pose of Lola, the girlfriend of Bugs Bunny and one of the most popular characters in the “Space Jam” movie, shall win the hearts of the fashionistas with her glamourous pose and her charming expression.

The bunny has a love heart tattoo on one of her arms, the word doll inked on one of her dreamy eyelids, and a beautiful flower tattooed on one leg. Her cute dress flaunts her hourglass shape, and she aces the style quotient with the large sneakers. If this popular artwork impresses you, why not give it a try?

This Lola Bunny tattoo is exceptionally colorful and captivating. If you are a lively or jolly person, it is time to get this tattoo considered.

Lola, being the partner of Bugs Bunny, is equally clever and sassy, and that is quite evident with the look in her eyes as she holds the bold spinning on her middle finger; perhaps reflecting or conveying her carefree attitude towards a society that looks down upon girls or women being sassy, confident or carefree but our heroine doesn’t give a damn to those chitchats. This colorfully amazing tattoo design must just be the appropriate one for the unending zeal inside of you.

Last but not least, this greyscale tattoo of Lola from Instagram is so popular that it has got almost 2.4k likes.

Although inked in greyscale yet, the shading on this tattoo is so vivid that one might call it quite realistic; you can even check out the collar bones of the bunny, which are quite prominent The locks of her hair (or fur as you may call it), her dreamy eyelids form a realistic carefree expression on her face, even in greyscale.

Have you not gone nuts over these tattoos yet? Hopefully, the designs have already won your heart with the bold and stylish Lola Bunny, but if you are still in doubt and cannot decide on the perfect Lola Bunny tattoo, here are some more interesting Lola Bunny tattoos for you to check out.