10 Best Lion And Cross Tattoo Ideas That Will Blow Your Mind! 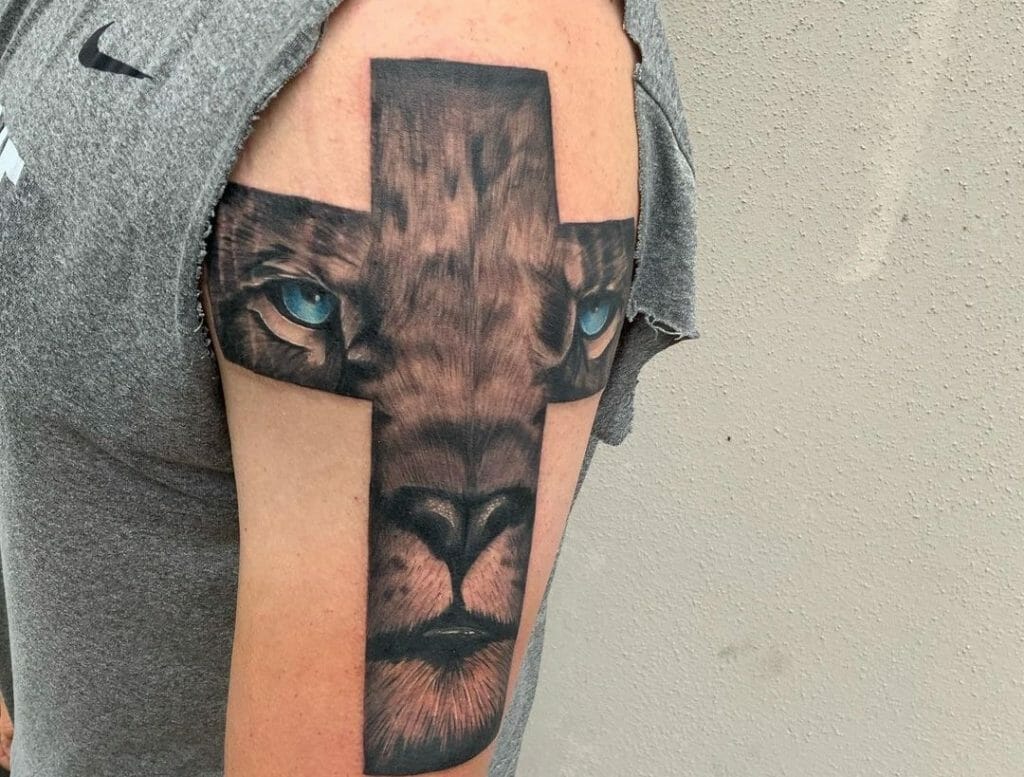 The lion and cross is a great power symbol, and these are some of the most beautiful and majestic Lion and Cross Tattoo ideas that you can find!

The lion and the cross are often seen together in tattoos.

They are often brought together due to their connection to the bible. The lion is used to represent Jesus Christ and is considered as a symbolism of Christ’s defeat of death.

A Lion tattoo can represent a person’s capacity to persevere in the face of adversity and their bravery in the face of tragedy. The Lion tattoo meaning represents strength and bravery, and such tattoos are frequently large and noticeable due to their profound significance.

Cross tattoos may be a symbol of your faith or commitment to a religion. The cross is a major symbol in Christianity since it is where Christ died to rescue mankind. Similarly, a cross tattoo might represent Jesus’ love and affection, and suffering for the human species.

Lion And The Cross

This is a very beautiful lion tattoo that shows the crucifixion below the lion. We can see rays of light coming from where Christ dies. There is a cross symbol on the lion’s forehead. The tattoo artist might have intended for the lion tattoo to symbolize the fierceness and power of Christ. This tattoo design shows us the majesty and strength that the king of the jungle has.

This is a very great art style that would look very good on the inner arm or the upper arm. This is a very gorgeous and large tattoo design, and it is a great lion tattoo for men and women. The lion tattoo design is very beautiful and is a terrific idea to get inked if you want to pay homage to the bravery of the lion and the faith in Christ. The powerful male lion represents strength and self-control, and it will also look amazing as a full sleeve lion tattoo.

This is a very unique lion tattoo design that is in the shape of a cross. But the cross is also a very powerful-looking lion, and its fur is seen very beautifully at the edge of the cross. This is one of those lion tattoo ideas that are great if you want to get something pertaining to your religion but want to add a personal touch to it as well. The details added to the face of the lion tattoo design make it even more appealing.

This lion tattoo design stands out because of the lion eyes, which are blue and piercing. The lion’s mane is also very lovely, and the fur peeping out from the cross looks very realistic. This lion and cross tattoo would look amazing as sleeve tattoos or as a lion forearm tattoo. It is one of those lion tattoo designs that will also look good as a lion back tattoo, as it can be sized according to your preference.

Half cross Lion of Judah Tattoo

The lion tattoo shows a very ferocious-looking lion, and half of it is constrained into the shape of a cross. The lion’s design looks serious and sombre, and the parts of the animal that is not seen due to the cross add to this feature. The powerful-looking lion could be the lion of Judah.

The Lion of Judah is a Jewish historical and ethnic emblem that has historically been associated with the Israelite tribe of Judah. The group is made up of relatives of Judah, Jacob’s fourth son, per the Torah. This is one of those lion tattoo designs that can be attractive as a lion shoulder tattoo.

The lion is a very prominent symbol, and this tattoo with cross and lion would look very magnificent as a lion hand tattoo. It is also a common symbol that is tattooed on the arms and legs. It can be customized according to your needs and will look very good as a lion sleeve tattoo.

Lion looking through a Cross Tattoo

This is similar to the lion-shaped cross tattoo, but unlike that tattoo design, this tattoo shows the entire lion. We can see the whole face of the lion, looking very strong and powerful. Upon the face of the lion, there is a cross that covers the tattoo from top to bottom and side to side. This is one of those lion tattoos that many tattoo artists recommend for a very fierce look.

As the lion is a very popular symbol for power, and the cross is a very sacred symbol of the church, this is one of the best tattoos that combines the message of both these styles. Common meanings of these two designs relate to the sacrifice and love of Christ, and it is a very good tattoo design that commemorates the ideals he tried to popularize.

This lion tattoo design is perhaps one of the most beautiful designs you will find under cross and lion tattoo drawings. It features a very serious-looking lion inscribed in a cross symbol. The lion eyes are very intense, and the mane of the king of the jungle really makes this lion tattoo stand out. The mane is inked in many colours like orange, blue, green, and more. This gives the lion’s design a very regal and beautiful look.

If you want a roaring lion tattoo or lion tattoo ideas that are eye-catching and majestic, this is a very beautiful lion face tattoo to go with. This design will look amazing as a lion chest tattoo. This also celebrates the colour of the jungle as a tribal lion tattoo as well. If you want a design that champions the tribal heritage of the lion king, this is a great lion tattoo to consider getting inked onto your body.

Lion and Cross with Patterns

This is a very interesting lion tattoo as it has geometric lion tattoo designs in it. We can see a royal lion inside a cross shape, and around it is many patterns of flowers, shapes, and lines. This is one of those tattoo ideas that emphasize the intensity of the lion eyes tattoo.

We can see the power the lions hold in this design. The patterns around the geometric lion tattoo could represent the other animals over which the lions preside over.

This is one of those simple lion tattoos, with a powerful lion looking through a cross. What makes it interesting is that it is one of the most realistic lion tattoos ever. The lion face tattoo is very intense and looks almost like a picture of a lion. The lion inside could be a lioness as well, as the eyes and fur of the tattoo are very well defined.

The lion is a powerful representation in many cultures, and this animal is renowned for its pride and power. The realism of the tattoo makes it a great chest tattoo, lion and cross included in its beauty.

This is a fierce female lion tattoo with the lioness seeming very angry and ferocious. Its eyes and mouth are red, and there is a small cross around the eye of the lion. This could represent the ferocity of lions and this characteristic is reflected in the gods.

The roaring lion tattoo is very powerful, and it can look very nice anywhere on your body, as it is a small lion tattoo. The female lion tattoo depicts the power that the majestic lions hold, and this is one of those tattoo designs that has become a cultural symbol of power. In a smaller size, it can make a good cross and lion tattoo on wrist.

The lion tattoo shows a roaring lion tattoo, with a crown on its head, depicting the pride of the lion. There is a cross symbol underneath the lion, and it is winged. The winged lion tattoo representation of the crown tattoo is to show the regality of the lions.

The lion is an animal that always travels in pride, and the winged lion represents their leader. This is a comparatively small lion tattoo, and it is among those lion tattoo designs with many powerful elements in it.

This could be one of those lion tattoos that represent the zodiac symbol Leo as well, as that is an astrological sign which has the image of a lion.

Here we can see a very majestic lion, with a large cross across its head, and going through its eye. There is Christ being crucified under the lion, showing the large beast as a protector. The tattoo lion is very regal and its mane looks like it is on fire. The shading of the tribal lion tattoo seems very realistic.

This is one of those lion tattoos that emit an aura of both fierceness and peace at the same time. The lion appears in the air in the tattoo like a god-like figure, displaying the power and intenseness that faith and religion can provide.

If you like these ideas, we have more ideas that you can take a look at, like –

Tattoos are a long-term commitment and it understandably takes a lot of time to select the perfect design. Hopefully, these lion design tattoos above may be of help. So, don’t think much and get this tattoo now