101 Best Lightsaber Tattoo Ideas You Have To See To Believe! 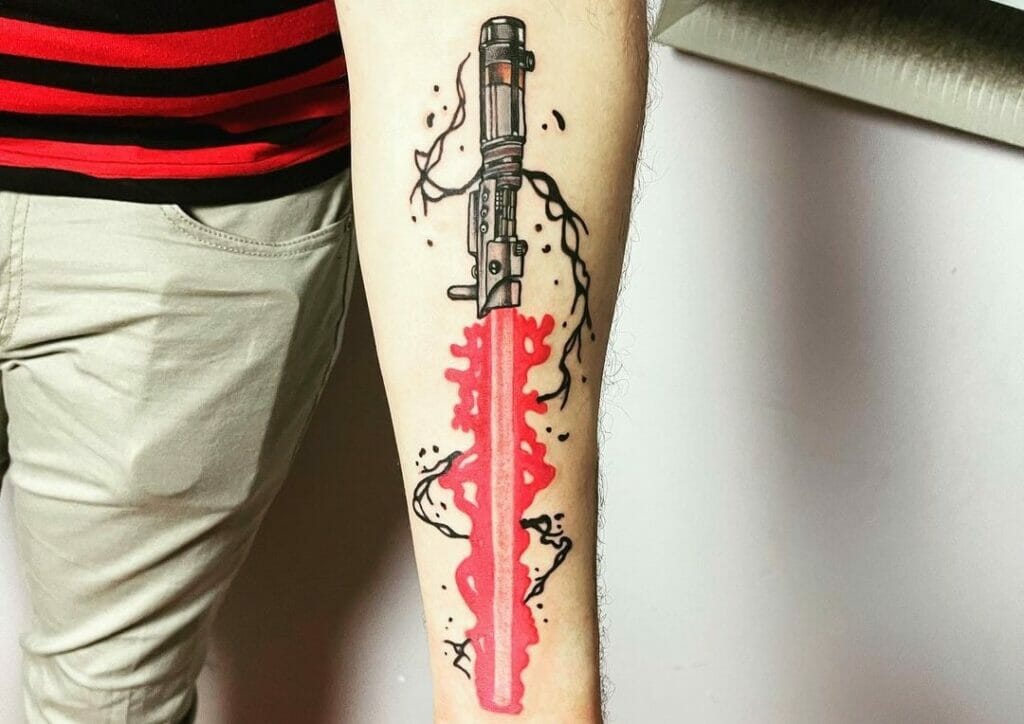 Star Wars, a trilogy that had an everlasting impact on Hollywood and future sci-fi movies.

It’s not possible to imagine movies such as The Matrix, Raiders Of The Last Lost Ark, or The Lord Of Rings without Stars Wars.

The original movie trilogy was one of its kind way back in the 70s and 80s. The original trilogy depicts the adventures of Luke Skywalker and the Rebel Alliance, the Imperial Forces under the order of Palpatine and Darth Vader. The trilogy had some significant cultural impact and is still regarded as one of the best movie trilogies ever produced in Hollywood. Any Star Wars fan cannot forget the battle between Jedis and Siths. In 2015, Episode VII: Force Awakens was released as the sequel to the original trilogy. Two more movies capped off the new trilogy with Episode VIII: The Last Jedi and Episode IX: The Rise of Skywalker. When discussing Star Wars weapons wielded by Luke Skywalker, Jedis, or even Siths, we can never forget the iconic lightsabers.

It does not matter if you are a fan of the new age star wars movies or the old ones, every fan of this iconic series should get inked with a lightsaber tattoo. Check out these lightsaber and Star Wars tattoo designs below and find something to ink yourself with!

In this lightsaber tattoo design, Darth Vader can be seen holding his iconic red-coloured lightsaber and using the power of force against his opponent. Darth Vader’s lightsaber was equipped with a dual-phase function which allowed him to control the lightsaber’s blade length in fights manually. Vader often used his lightsaber in confrontations against any Jedi, and this weapon was also used to strike down his former mentor, Obi-Wan Kenobi. The tattoo artist has captured Vader’s aggression and pose from movies perfectly. It would be criminal to get this tattoo inked anywhere other than the spot shown in the picture!

This is one of those star wars tattoos that integrates an iconic dialogue from the live-action movies and the classic lightsaber tattoo. The dialogue ‘Oh, hello there’ was said by Obi-Wan Kenobi in the Revenge Of The Sith, and it has been combined with the lightsaber of Kenobi in this tattoo design. This specific lightsaber was Obi-Wan’s third and last lightsaber with a blue colour to it. The tattoo artist has done a great job with this tattoo design, and the colours of the tattoo go well together. You may get this inked on your hand, arm, or leg.

Instead of the lightsaber tattoo design, the artist has a cute C-3PO tattoo integrated with a hello kitty tattoo. C-3PO is a loved character in the Star Wars series. C-3PO was built by young Anakin Skywalker and has been a companion of major characters throughout the Star Wars series, even in the new-age films. In this tattoo style, C-3PO’s iconic golden-yellow colour has been inked well by the artist and Japanese text in the tattoo design. Try to find more designs of lightsabers to integrate with this. You may get this inked alongside Darth Vader lightsaber tattoo or Kylo Ren Lightsaber tattoo on your arm, legs, or back.

The lightsabers are one of the most iconic weapons from any Hollywood movie. There are multiple other lightsaber tattoo designs out there that you can look at online if you want to add more to these already mentioned designs. Still, if you are looking for more designs for lightsaber and star wars tattoos, check below.

What is a lightsaber tattoo?

A lightsaber tattoo is a type of body art that is based off of the popular Star Wars weapon. It typically consists of a curved blade or hilt, and sometimes both, inked onto one’s skin. The design can be abstract or realistic, depending on the individual’s personal preference. Popular colors for a lightsaber tattoo include green, blue, and red, to represent the iconic lightsabers of Luke Skywalker, Obi-Wan Kenobi, and Darth Vader respectively. Other colors may be used as well; yellow is sometimes seen to represent Mace Windu’s lightsaber. Some people opt for glow-in-the-dark inks or different color combinations as an added special effect. A lightsaber tattoo can be a great way to express one’s love for the Star Wars franchise or show off an appreciation of classic sci-fi weaponry.

How much does a lightsaber tattoo cost?

The cost of a lightsaber tattoo will depend on the size, complexity, and amount of detail involved in the design. Generally speaking, small designs that are only one or two colors can range from $50-$100 USD. More complex designs with multiple colors or special effects such as glow-in-the-dark ink may cost up to $200 or more. Additionally, some tattoo artists may charge an hourly rate instead of a flat fee. It’s best to consult with the artist directly for an accurate estimate before committing to the design.

What is the best way to cover up a lightsaber tattoo?

The best way to cover up a lightsaber tattoo is with a larger design that completely or partially covers the existing one. This can be anything from an intricate floral pattern to another sci-fi themed design. If the original tattoo was small, it may also be possible to use dermablend or other heavy-duty makeup to conceal it.

How long does a lightsaber tattoo take to heal?

A lightsaber tattoo typically takes anywhere from 4-6 weeks to heal completely. This timeframe can vary depending on the individual’s skin type and how carefully they follow aftercare instructions, such as keeping the area clean and moisturized. It is important to avoid using any harsh soaps or scrubbing too hard while cleansing the area, as this can cause damage to the healing skin. Additionally, it is important to keep the area away from direct sunlight and wear protective clothing if going outdoors. Following these steps will help ensure a smooth and complete healing process.