10 Best Leonidas Tattoo Ideas That Will Blow Your Mind! 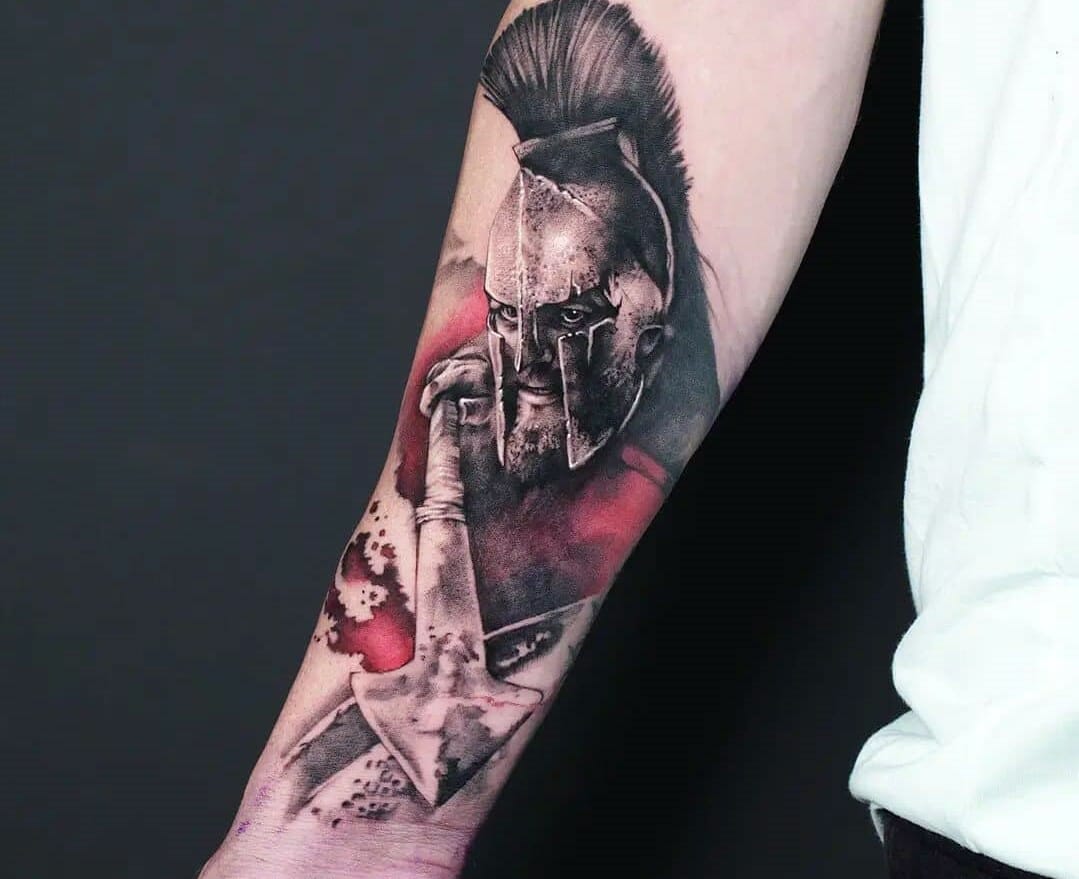 These are some of the great Leonidas tattoo ideas that depict the bravery and power of the most courageous ancient Greek king! Check them out.

The great king of the ancient Greek city, Sparta teaches us bravely to fight all our difficult situations in life.

Leonidas was one of the most famous Spartan kings who led a band of Greek allies at the battle of Thermopylae where they defended the pass through which the Persian king was supposed to enter. Keeping the same inspiration and teachings as Leonidas, understandably, the most dedicated political activists are merging the figure of Leonidas with tattoos of their favourite king and Greek warrior combination showing dedication and support.

Warriors’ tattoos are popular these days since it has always been a huge desire in a man’s heart to be compared to valiant immortal soldiers. We’ll go over the various interpretations of the Spartan tattoo. The majority of them focus on characteristics that a fighter could possess. Tattoos may be as powerful and expressive as the person who wears their wishes.

For more information on this, you must read this article thoroughly.

You can see the determined look on the king’s face as always. The bottom of the tattoo also involves warriors firm on the battlefield who are carrying shields with them. The strong metal shield is always going to provide them with a sense of security. With the complex and well-detailed armor on the head, this is a contemporary and streamlined style of the Spartan fighter. Not only do you learn a lot from these designs, but it also shows your bravery and conviction.

Do you see those fierce eyes and the strength they hold? A very well-descriptive tattoo is right above.

Below king Leonidas, you can see the straight line of warriors set in a ready position trying to defend their country and honour. The goal is not to let your enemies reach your kingdom ever. The shield is covering their body even though they are not afraid of fighting. This could be the perfect sleeve tattoo, though the tattoo artists work would be tough here.

The use of the red color ink enhances the beauty and the seriousness of the tattoo.

The background is black in colour that helps in focusing on the king’s determined face.

On a really brave arm, a nationalistic tattoo. The metal and ominous Spartan helmet, a show of power, commitment, and bravery, steals the show. The American flag’s stars and stripes are in the backdrop, with a single blue stripe emphasizing the fact that it is a time of stability. This design is an excellent addition to your small list of Molon Labe tattoo ideas, owing to the high-resolution Spartan Helmet.

You will find that the Leonidas tattoo is a very well known tattoo. In the Battle of Thermopylae, he was the Spartan general who led his troops against Xerxes. According to legend, Leonidas commanded a force of 300 men against the entire Persian army. The Spartans held off the Persians for eight days before being outnumbered and putting up one of history’s most renowned final stands. This is the source of the film’s inspiration, as well as one of the main reasons why people are fascinated with the Spartan army.

Well, it is your moment to get yourself inked with this tattoo and remind yourself to never give up.

Leonidas Helmet Tattoo That Will Make You Feel Powerful

This is a typical and rustic depiction of King Leonidas. This ink work is a finely contoured drawing in grey and black. The attention to detail is outstanding. The tattoo artist gave the metal helmet additional personality by adding features like a crack along the forehead area, implying that it has been through a few conflicts.

Going through obstacles is a part and parcel of life, but always remember to start afresh no matter what happens.

That Fierce Leonidas Tattoo That You Need To Have!

The contouring and intentional negative space are beneficial when dealing with the dark shade, as well as the gray and black details. Both of the faces are inked neatly, precisely, and positioned to match the curve of the helmet’s edge. The valiant patriotic arm that carries the contemporary battle cry of defiance against oppression. The helmet, Spartan in every aspect, appears weathered and has seen many fights. The artist has very creatively inked the faces showing determination and valour. If you want a tattoo providing this, reach out to your closest tattoo artist today!

What does Molon Labe mean?

It is King Leonidas of Sparta’s striking and immortal comment to King Xerxes of Persia just before the battle of Thermopylae in 480 BC. The little Spartan army was instructed by King Xerxes to put down their arms. “Molon Labe!” said the Spartan King.

The tattoo just consists of the king’s face. Angry or determined? Cannot say.

We can see that the king is ready to attack and protect his community fearlessly. He is holding his weapon and shield and ready to attack at any time. This design is what we call hard and admirable work. The tattoo artist has perfectly used black and grey ink. This Leonidas shield tattoo is so realistic that you will be able to feel the bravery and power just by looking at it.

Lion And Leonidas, What Can Be Better Than This?

This has to be one of the coolest and powerful tattoos you will ever see. It looks like it has been taken right from a canvas. The top half of the tattoo has king Leonidas and there’s a lion at the bottom. No wonder they both share the same, being fearless being king of the jungle and always having the authority of the kingdom. This is a full sleeve tattoo that you will definitely love on your arm or calves.

If you and your best friend are very competitive this one is for you.

The king has blue eyes here, the tattoo artist has made sure that we can see the grinding of the teeth and the crunching of the nose in aggression, that will make anyone fear. The tattoo artist has given the helmet a hard iron texture. This design will look great on the arms or the chest.

The Spartan tattoo is a powerful sign of strength. These guys behind the hoods, as we all know, were among the most formidable fighters to ever wield a sword. The tales around them will be remembered for a long time. Perhaps we need reinforcement of our own might, and the Spartan tattoo may serve as that inspiration.