101 Best Leg Tribal Tattoo Ideas That Will Blow Your Mind! 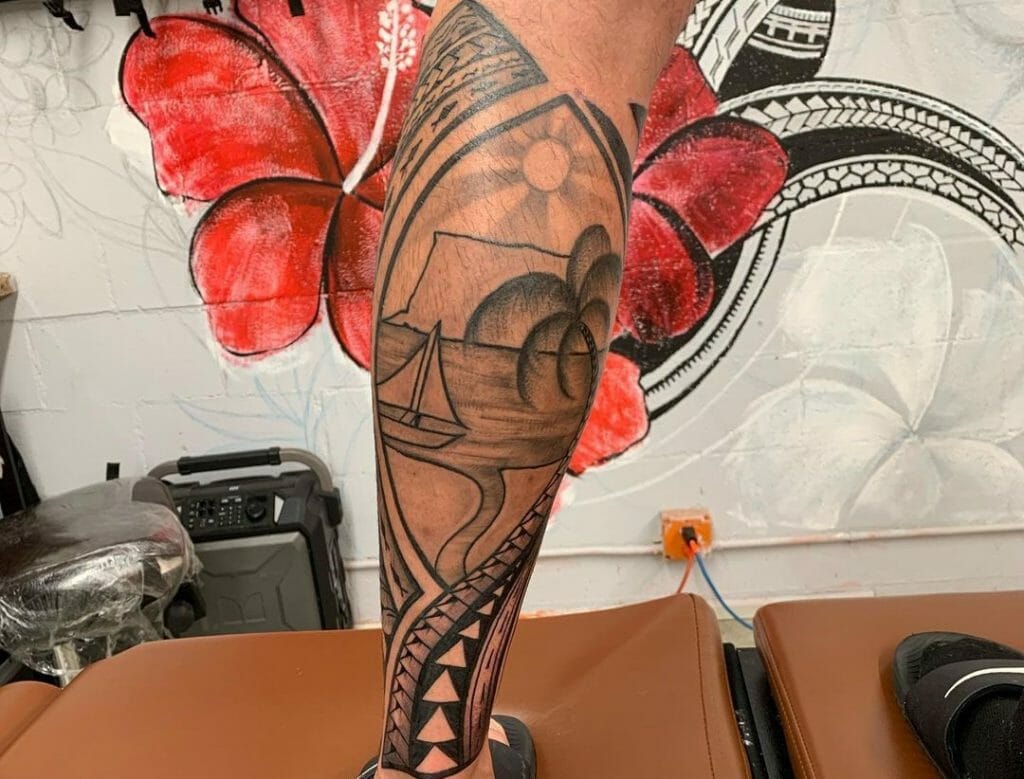 If you are into tribal tattoos, then a leg tribal tattoo can be a great one to go for. It can be a large tattoo and really connect with a different culture.

Leg tribal tattoos are a very famous tattoo art form for people who are accepting of different cultures.

In this tribal tattoo on the leg, various cultures are expressed through important signs and symbols. The tattoos can be a Celtic leg tattoo done in tribal style, a religious leg tattoo, Hawaiian tattoos, Polynesian tattoos, Maori tribal, Filipino tattoos, a tribal biomechanical leg tattoo, any tribal tattoo, that represents a certain culture.

These leg tattoos can be positioned on any part of the leg wherever they look and fit their best. The leg tribal tattoos are more special since the entire space is dedicated to a certain tribe or culture which is very meaningful. The full leg sleeve tattoos are much harder to achieve than the lower leg small tattoos as they are more painful areas of tattooing. It takes several sessions to complete a leg tattoo. There are different designs which are all unique.

In this tribal leg tattoo, the tattoo artist has used Mapuche tribal designs. These designs are grounded and centred around the earth and nature; it represents the earth’s surface. The design looks like a map of block patterns. The vision of the tattoo is to express various religious patterns in form of circles, zigzags, cuboids, and ladders.

The tattoo artist has shaded certain portions using thick jet black ink and has left certain patterns lightly touched so as to highlight certain areas. These patterns have been executed with utmost detail. The early native tribes used to make these patterns in order to express the symbols and certain important messages and maps through these patterns.

Although, it might not have the same meaning now but it has surely captured the aesthetic look which people are attracted to. Each tribe had a particular pattern and it held deep significance. The tattoo artist has done a great job with fine skills in this tattoo.

This is inspired by a Polynesian tattoo in which the tattoo artist has used various patterns in spirals to express every detail with perfection. Each pattern has a particular path from top to bottom. There are feather-like patterns, fish-like patterns, curly line patterns, zigzag patterns, and so on. The tattoo is a 360-degree tattoo that is visible from all sides.

The position of the tattoo in the leg gives it ample space for all the patterns to be proportionately designed. As we move towards the front, there are arrow-like patterns that have been drawn to cover up the space. Right beside it, we have sea creatures styled pattern which makes this tattoo look more mysterious.

As we move towards the back, the tattoo artist has also drawn a beautiful sunset which is a creative element. It also acts as an element of relief where there is a break in the chain of various patterns. The overall execution of the tattoo is incredible.

It looks like an elevated mandala design. The tattoo artist has also given ample space in between the patterns which makes the overall tattoo more aesthetic and charming.

There are various triangles, cubes, and rectangles in these patterns, but the artistry of the tattoo artist has made simple elements look more interesting and creative. The overall finish of the tattoo is quite glossy and once tattooed in the leg, is sure to capture all attention.

In this tribal leg tattoo, the tattoo artist has gone for a Celtic tattoo approach. These Celtic symbols were created by the tribes as a mode of communication among them.

They represent aspects of life, death, religion, and spirituality. The entire tattoo looks very bold and Egyptian. The tattoo artist has tattooed the entire leg, from the hips to the ankles. There are various blocks, circles, stars, flowers patterns and other mysterious patterns.

The main attraction of this tattoo is the blocked ink fillings. There are huge blocks of ink paints that make the overall tattoo look more bold and mysterious. The tattoo artist has done a great job in executing the tattoo with fine details.

This is a Polynesian tribal leg tattoo in which the tattoo artist has made the entire tattoo using triangular symbols. These Polynesian triangular patterns represent a region of the pacific ocean which is surrounded by three islands. The names of these islands are Hawaii, Easter Island and New Zealand. These motif patterns usually symbolise a cloudy sky.

The dark hues of the black ink make this tattoo look stunning and the position of the tattoo which is placed behind the leg is the perfect spot for a spacious Polynesian tribal leg tattoo.

This tattoo is a Japanese leg tattoo. The position of the leg tribal tattoo starts from the leg sleeve and ends near the ankle region. There are large flower-like patterns throughout the tattoo.

Through these flowers, chains of various patterns are adjoined which makes the overall tattoo look aesthetic. The tribal tattoo goes in a spiral pattern and is not clustered with a lot of patterns at a certain position.

There are patterns that consist of horizontal and vertical lines, triangular patterns, various blocks, and other spiral lines. There is a portrait of a long-horned animal that adds a creative touch to the tattoo. Overall, the tribal tattoo is balanced between light and dark black shades which makes it more fun.

The tattoo artist has used interesting and complimenting colours. Red, orange and yellow inks have been used to colour the flowers. The entire sea-like patterns has been spiralled all around the leg. The tattoo artist has very cleverly spaced out the knee joint to make give the tattoo a break amidst large complex patterns. This space right here looks very creative and elegant.

At the bottom of the tattoo, behind the calf area, the tattoo artist has also added certain abstract sea creatures that give this tattoo a tribal effect. Overall, the bold colours in this tattoo make it look great with beautiful intricate details.

At the very bottom, there is a lotus pattern, which is attached with an elevated pattern of Egyptian-style tattoos. It looks like a mandala design where each pattern has been spaced out and has been detailed with utmost skills. The slanted spirals look elegant in the overall aesthetic of the tattoo.

Once again, the tattoo has been made using black inks and the execution looks dark and mysterious. It also has a glossy effect as the darkness of the tattoo is not too overpowering.

This tattoo style is a turtle half-leg sleeve tattoo where the tattoo has been placed under the knee joint and ends above the ankle. The tattoo is inspired by a Floridian design where earthy elements have been amplified using elements of air, water and fire.

The entire tattoo looks great it is well balanced with black and empty spaces. There are fire styled patterns below the knee joint and then right beside it, we have leaf patterns in blocks and rectangles.

At the bottom region of the tattoo, the tattoo is covered with large titled triangular patterns which are filled with black ink. Overall, the entire design is well created and the execution makes it look more fun and interesting.

In this tribal tattoo on leg, the scalar patterns are the main beauty of this tattoo. The tattoo artist has done a great job in enhancing the scales texture and has executed a skillful replication of it, over the skin. The tattoo looks great in the leg sleeve area.

It looks very elegant and the details are absolutely remarkable. It also resembles a reptile skin pattern that looks great on a human skin. The tattoo contains Maori styled patterns which are also known as Kowhaiwhai patterns. This is a traditional pattern of a New Zealand tribe.

The back portion of the tattoo is the most interesting pattern in this tattoo. They resemble symbols of very famous tribal cultures and signs like the koru, the twist, etc. Overall, the glossy effect of the tattoo makes it elegant and beautiful.

There is a number of more designs that you can check out for your leg tribal tattoos. They are all listed below:

Still looking for inspiration, then checkout this blog post about calf tattoos.

What is the meaning of a tribal tattoo?

A tribal tattoo is a design that uses motifs and symbols from ancient cultural tribes to create custom tattoos. Tribal designs often include bold dark lines with intricate patterns and shapes that are meant to convey spiritual, ancestral or cultural significance. Often, tribal tattoos will feature abstract representations of wildlife such as eagles, wolves or snakes. Some popular meanings associated with tribal tattoos may include protection, bravery, strength, unity and loyalty. Additionally, some symbolic meanings associated with tribal tattoos may be linked to religion, culture or spiritual beliefs. Tribal tattoos are sometimes used to represent a person’s heritage or cultural background. They can also serve as a way to show commitment and dedication to certain values or ideals.

What are some of the best leg tribal tattoo designs?

The best leg tribal tattoo designs usually feature bold, dark lines, intricate patterns and shapes. Some popular leg tribal tattoos include sun symbols to signify hope, strength and fertility; arrowhead design for protection; chevron patterns for courage and strength; geometric shapes like triangles for balance; dreamcatcher designs for spiritual protection; and animal motifs such as eagles, wolves or snakes for strength and power. Additionally, skull designs can also be used to represent mortality, while mandala patterns often symbolize spiritual awakening or enlightenment. Ultimately, the type of leg tribal tattoo you choose will depend on your personal preferences and the meaning you want to convey with your design.

How much does a leg tribal tattoo cost?

The cost of a leg tribal tattoo can vary depending on the size and complexity of the design, as well as where you get it done. Generally, smaller tattoos can range anywhere from $50 to $200, while larger tattoos will usually start at around $300 and go up from there. It’s important to keep in mind that the cost of a tattoo may also increase based on the amount of time it takes for the artist to complete your design. Additionally, if you are getting a tribal tattoo done with multiple colors, then you should expect to pay more than if it was done in just one color.

What are some things I should consider before getting a tribal tattoo?

Before getting a tribal tattoo, it’s important to consider a few things. First, make sure that the design you choose is meaningful to you and conveys the message or symbolism you want it to have. Secondly, research the artist before settling on one; look into their experience level and portfolio of work to ensure that they are capable of providing the quality of work you are looking for. Lastly, make sure you know exactly how much the tattoo will cost ahead of time so there won’t be any unpleasant surprises. Additionally, getting a tribal tattoo is a long-term commitment, so it’s important to give yourself plenty of time to think over your decision before going ahead with it.