101 Best Lebron James Tattoo Ideas You Have To See To Believe! 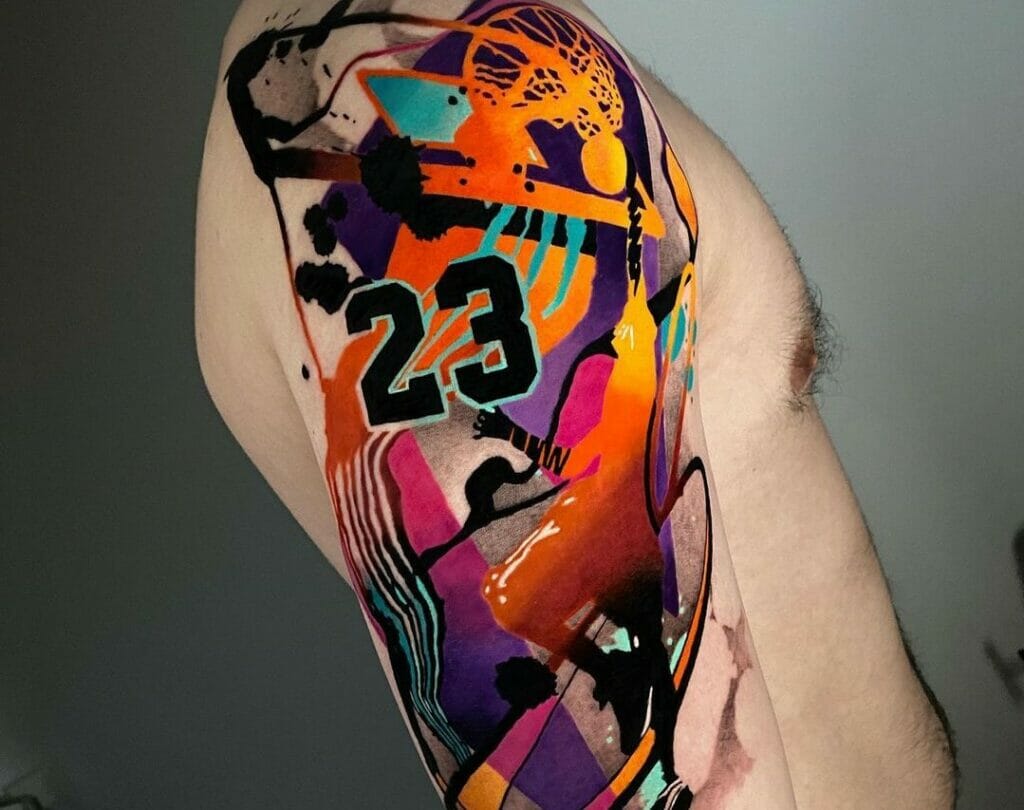 Are you a fan of LeBron James? Do you want a tattoo of your favorite NBA star? Then, check out these top 10 LeBron James tattoo designs!

LeBron James is an NBA star playing for the Los Angeles Lakers. This Lakers star himself flaunts many tattoos that have grabbed the attention of the world. The tattoo inked on his upper back, the crowned lion on his right bicep, and a witness tattoo on his right calf are some Lebron James tattoos. He has 330, which is an area code inked on his right forearm to reference his hometown area code. He also has a ‘what we do in life echoes in eternity’ tattoo divided between the right and left arm. A gifted child inked on LeBron’s chest is a reference to his son. To honor his mother, he has a Gloria tattoo inked above the lion head tattoo, which indicates his love for her and also that she is a lioness. He has a beast tattoo on his left bicep also. Just below the beast tattoo on the left bicep is a ‘hold my own’ tattoo. His son Lebron jr is inked on the inside of his left forearm. The letters L and J have been inked on the right forearm and left forearm. Land J refers to his initials. Other tattoos include a Bryce Maximus tattoo for his second son Bryce Maximus in the right forearm, a tribute to Kobe Bryant through a Kobe Bryant tattoo, family tattoo, Akron tattoo on the right shoulder, the lion from saint mark’s gospel, history tattoo, two flying birds tattoo are all among the various tattoos inked on Lebron’s body. Most of his tattoos show how much family means to the star in his life. Lebron has no tattoo on his face.

A LeBron James-inspired tattoo will be a great addition among many things that you can get tattooed on your body. If you are a fan of this los Angeles lakers NBA superstar, these lebron james tattoos might interest you.

James Lebron is known by the nickname king James in the basketball world due to his achievements in life in sports. This Lebron James sleeve tattoo is divided into two sections on the right leg. The title of king is highlighted through the tattoo. The first half of the tattoo is a James Lebron face tattoo and has the king written on the cheeks of  Lebron James face. The word king is written in small letters along with a crown. The right calf of the leg has another tattoo apart from the face of Lebron. A picture of Lebron playing basketball in his number 23 jersey with the crowd cheering is tattooed on the right calf. This is one of the most striking Lebron James tattoos.

In this Lebron James Instagram tattoo-related post is the king James in his Los Angeles lakers jersey in black, white and grey ink. This James tattoo has a simple picture of Lebron, holding a basketball in his hands in a relaxed stance. The jersey he is wearing belongs to the Nike campaign. This tattoo looks good on both the right arm and left arm. The details on his face are well defined in this beautiful tattoo.

Multiple elements are inked together to create this Lebron James leg sleeve tattoo. The James tattoo with the face of Lebron wearing a golden crown screaming in high spirits is inked on the upper calf. The small crown is placed on the basketball player’s head as a reference to the title king. The bottom part of the tattoo has James playing on the basketball court with a ball in one hand, with an excited crowd behind him. The word LA is written in big letters underneath this image.

This LeBron James tattoo includes a goat covered in a number 23 dress, which references the King of basketball. The tattoo artist drew a crown on the top of the head of the goat. This is a colorful tattoo with a light blue shade for the goat. The jersey colour is also red, a reference to the Lakers team. If you wish to ink an adorable LeBron James tattoo that can fit on a small canvas, this is the design for you!

In this tattoo, Prince James looks very fierce and powerful. This LeBron James new tattoo ink covers the sides of the upper body. The color red and brown designs around the face of LeBron give the tattoo a royal feel. LeBron James is covered in a king’s attire, has fiery red eyes that match and a bejewelled crown. This striking James tattoo covers one side of the torso and is popularly inked by bold, young people (like you!)

This sports illustrated piece of LeBron James seen playing in the NBA makes an incredible sleeve tattoo that covers a wide body area. The tattoo is accompanied by words like ‘chosen’ and ‘king James’ which honors the NBA star for his contributions to the sports. This tattoo highlights LeBron’s complete profile aiming for his next shot. This LeBron James tattoo can look great on the shoulder and arms as well.

If you love the teamwork of both LeBron James and Dwayne Wade, this tattoo is just what you need. Both players are wearing black and red jerseys. Like two black flames, these two stars shine so colorfully in this tattoo. This arm tattoo is filled with a crowded stadium behind the two players, adding to the whole sports vibe. The realistic design and vivid colours in the tattoo makes it seem like an image in a sports illustrated magazine! This tattoo of NBA’s multiple stars can be inked on either your left arm, right arm or the chest.

This detailed and straightforward LeBron James tattoo has the face of the star drawn so well that it almost feels as if you’re looking at him in person. The face is enclosed in a rhombus shaped frame. The NBA player looks every bit of a beast player that he is in the tattoo. With a bright yellow head band and realistic ink style of the facial features, this tattoo is surely a memorable one!

In this tattoo, LeBron James is zoomed in, and we can see the NBA player in great detail. This type makes a perfect LeBron James shoulder tattoo or a LeBron James chest tattoo. The large face of LeBron and the details of his face from the head to the jaw give the NBA player a majestic look in the tattoo. This tattoo artwork can be great tribute to your favourite NBA superstar!

This minimalist colorful LeBron James playing basketball is inspired by a photo of the same. This tattoo is colourful and detailed with a clear background as well. This small colorful tattoo is perfect for those who want to ink a minimalist design. Graphic portrait tattoos of this size would fit wonderfully on arms and either forearm.

Here are some more NBA Superstar Lebron James tattoos to take inspiration from:

What is the meaning behind LeBron James’s tattoo?

LeBron James’s tattoo is a tribute to his family, friends, and mentors. It features a crown with nine stars representing the people in his life who have helped him reach success. The phrase “Strive for Greatness” is also included, as it is something that LeBron lives by daily. He also has several other tattoos on his body that represent his accomplishments, such as the Larry O’Brien Championship Trophy he won in 2016 and a tattoo of his jersey number. By honoring those closest to him with these tattoos, LeBron is able to pay tribute to the support system he has been blessed with while also motivating himself to strive for greatness every day. He has used this philosophy throughout his entire career and it is something that has made him one of the greatest basketball players in history.

How many tattoos does LeBron James have?

LeBron James currently has over 30 tattoos on his body. He has tattoos that honor his family, friends, and mentors, as well as ones that represent his accomplishments in basketball such as the Larry O’Brien championship trophy from 2016. He also has several other tattoos of meaningful phrases and symbols that he carries with him throughout his life. From the crown symbolizing his support system to the phrase “Strive for Greatness” as a daily reminder of what he stands for, LeBron’s tattoos are an important part of who he is.

What is the cost of a tattoo like LeBron James’s?

The cost of a tattoo like LeBron James’s is highly dependent on the size, complexity, and placement. Most tattoos of this type will range between $200-300 USD per hour depending on the level of detail and size. The overall cost for a large piece such as LeBron’s could be anywhere from $2,000 to upwards of $10,000. Additionally, it is important to factor in the cost of aftercare products and touch-up sessions which can add up over time. When getting a tattoo like LeBron James’s, it is important to search for a reputable artist who can provide quality work at an affordable price.