101 Best Kratos Tattoo Ideas You Have To See To Believe! 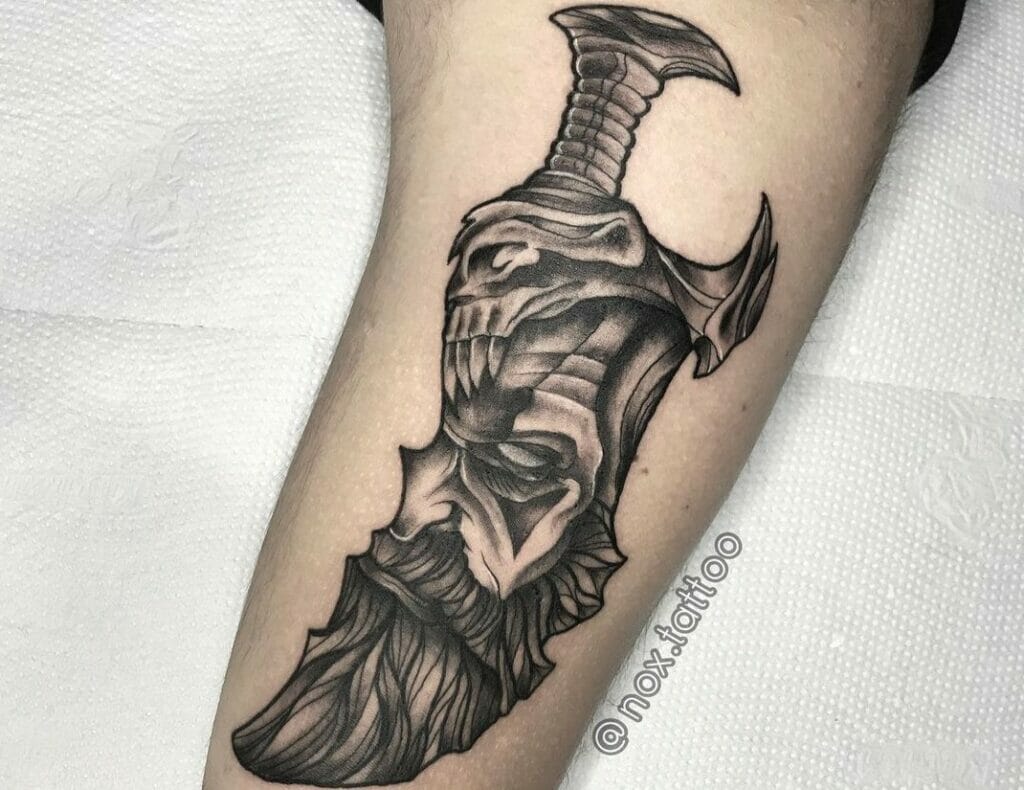 Do you want to get a Kratos tattoo? Here below is an excellent list of Kratos tattoo designs that you need to check out to honor your favorite character!

Kratos is a respected soldier and a spartan warrior.

Going by Greek Mythology, among gods, Kratos is a God of power and strength, a legend. He was the son of Zeus.

Zeus is considered to be the King of Gods.

Kratos’s character is famous for appearing in the video game story series called God Of War. The PlayStation video game is loosely based on Norse and Greek mythology culture. Kratos swore revenge on the god and his former master Ares as he was the one who got Kratos into killing his own wife and son. After getting his vengeance by killing Ares, Kratos took the way to the realm of Norse culture Gods and settled there. The creator of God of War has suggested that Kratos is bisexual.

You can get this legendary spartan inked on yourself as well and be part of the God of War lore. Check below so that you do can get a badass Kratos tattoo and also for some fascinating Kratos tattoo designs from the video game!

Have you played God of War 2018? Kratos has been inked beautifully here. Kratos’s eyes have been inked with the color white, and that combined with the rest of the design of the tattoo looks incredible. His facial expressions depict that he’s ready for the battle with other gods! Kratos’s legendary axe, Leviathan and the runes used in God Of War have been beautifully integrated into the design. You may get this tattoo inked on one of your arms.

Here, the artist has inked the god of war Kratos tattoo on the right arm. The tattoo that runs across Kratos’s left eye has been inked red, which honours his fallen brother Deimos whose life was taken by Thanatos, the personification of death. Kratos’s eye scar has also been depicted, resulting from an early encounter with the god Ares. Due to its size, this tattoo design can look outstanding on your arms, legs, or even chest.

The tattoo artist has inked both Kratos and the Roman army. Kratos’s face covers the upper hand of the left arm with his detailed face, including his scars and tattoo. The lower half of the arm is covered by attacking Roman soldiers who have wielded a shield and spear. The color of Kratos’s face tattoo matches the color of the Roman soldier’s cloak. A tattoo of this kind can only be inked on your arm.

The God of War, Kratos, in this tattoo design, is charging towards his enemies. The whole tattoo has been inked in black. A line that starts from Kratos’s forehead runs along his face to his Leviathan axe, which further continues till the end of the tattoo. This tattoo design is unique, and the work done by the artist is genuinely astonishing. You may get this tattoo on your arm or leg.

If you have been following up with the God Of War games, you are most probably familiar with the U-shaped symbol which has been brought up throughout all the games. This shape is Greek Omega which represents the god Ares. This Kratos tattoo design has covered one of the important elements of the game. The artist has portrayed Kratos’s face with this symbol inked with red color. Getting this tattoo on your leg like in the image won’t be a bad idea!

This tattoo symbolizes the young Atreus, son of Kratos and Laufey. The upper half of the arm has been inked with Kratos face, whereas the lower half shows the scene from God Of War 2018 where  Atreus is holding his primary weapon, the Talon Bow. This duo father and son tattoo is perfect to be inked on your arm or back.

Kratos’s facial expressions and details have been inked really well in this tattoo design. The tattoo is full of details down to strand of hair. A little bit of red has also been inked on the scar on his forehead with his eyes staring down his next targets! It would be a mistake if this tattoo is inked anywhere but in the exact spot as the image.

Warrior And His Blades Tattoo

You are looking for a tattoo that showcases the Kratos and his legendary Blades Of Chaos; you are definitely going to love this. A shade of yellow on Kratos’s face with him being chained to a blade that has a skull; how can this not be the coolest tattoo you have ever seen? Your arm would be the place for this beautiful depiction of the demigod and his iconic weapon.

As a fan of God Of War, Kratos’s face being engulfed by flames is one the most badass designs! The artist has perfectly captured the demigod’s raging face with mouth open and his eyes inked with yellow. The color combination matched with the legendary character will make any fan want to get this tattoo. If you are looking to recreate this, your chest, arm, or leg is the place for this tattoo!

The screaming mad spartan’s face has been carefully inked here with the color combination of red and black that can never be bad. If you look at Kratos’s eyes in the tattoo, you can see how well the tattoo has been inked. This kind of tattoo requires precision. You can see the scars on the Spartan’s skin.

Kratos tattoos are something a dedicated fan of the series God Of War would definitely go for to show their love for the game. With the coming of the next God Of War game where Kratos will take on Thor, this would be a great time to get yourself a Kratos tattoo! Check our suggestions for tattoos from God Of War.

What is the kratos tattoo?

The Kratos tattoo is a symbol of strength, courage, and determination, derived from the ancient Greek hero Kratos. It is typically a simple design featuring two crossed swords behind a shield with three stars above it. The shield can also have wings on either side. The tattoo is meant to represent resilience in the face of adversity and the courage to overcome all odds. Kratos is often seen as a symbol of victory and success, representing the strength needed to triumph over any challenge or obstacle. Many people choose to get this tattoo as a reminder that they can achieve their goals and dreams no matter what stands in their way. The Kratos tattoo has become increasingly popular among athletes, combat soldiers, and others looking for a symbol of their own strength and courage. It is also an excellent reminder to never give up in the face of adversity. The Kratos tattoo can be customized with any other symbols or artwork that are meaningful to the wearer.

What does the kratos tattoo represent?

The Kratos tattoo represents strength, courage, and determination. It is meant to be a reminder that no matter what stands in the way, it is possible to achieve personal success and triumph over any challenge or obstacle. The design of the tattoo typically features two crossed swords behind a shield with three stars above it. The shield can also have wings on either side. The three stars above the shield symbolize hope, strength, and courage; while the crossed swords signify power and protection. Additionally, many people believe that wearing a Kratos tattoo will bring luck and success in life. Thus, it provides motivation for those who are going through difficult times and facing adversity.

How much does a kratos tattoo cost?

The cost of a Kratos tattoo will vary depending on the size, complexity and placement of the design. Generally, small tattoos can range from $50 to $200; while larger designs can cost anywhere between $250 and $1000 or even more. Additionally, some artists may also charge an hourly rate for custom designs. It is always best to research different artists and compare their prices before making a final decision. This will help ensure that you get the best quality tattoo at the most affordable price.

What are some kratos tattoo ideas?

There are many different ideas for Kratos tattoos. Some common designs include two crossed swords behind a shield with wings on either side, two swords crossed in front of a shield with three stars above it, and several other variations. Additionally, some people choose to combine the tattoo design with other elements such as animals or natural scenes to create unique and personalized tattoos. As mentioned before, many people also choose to customize their Kratos tattoo with meaningful symbols that are important to them. Ultimately, the best way to find the perfect Kratos tattoo idea is to browse through different designs and pick one that resonates with you.