10 Best Kokopelli Tattoo Ideas You Have To See To Believe! 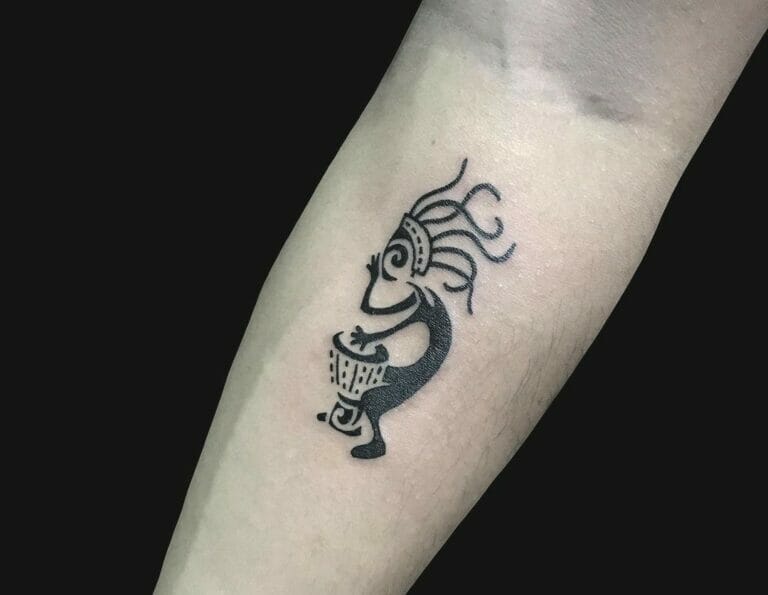 Do you want a Native American inspired tattoo of Kokopelli, the fertility God? Venture through this article for the 10 best Kokopelli tattoo ideas.

Kokopelli (more commonly pronounced Cocoa-Pelly, though pronunciation varies by clan) is a spiritual and mythical figure in Native American culture.

Because Kokopelli has such a unique appearance, it’s no surprise that many want Kokopelli tattoos or paintings. He has a slumped back and is drawn in a simple, stick-figure style.

Native Americans believed Kokopelli to be the protector of unborn children. He is a member of the American Southwest ‘ Pueblo Peoples. Before colonization, the area’s original occupants were numerous tribes, which were referred to as pueblos. They were also the pioneers of adobe architecture, which has influenced today’s mainstream styles in the Southwest. Because they named a collection of these adobe dwellings a “pueblo,” or town, these tribes are known as “Pueblo Peoples.” Despite being forced to conform to Spanish and Anglo ideologies and lifestyles in the past, the inhabitants have managed to preserve many old customs distinctive to their culture. This is where Kokopelli may be found.

Read the article to know everything about Kokopelli tattoos before getting one for yourself!

A Kokopelli tattoo may be a great way to start a new business, break a bad habit, or create a thrilling, one-of-a-kind experience. For native Americans, he is a symbol of vitality and rejuvenation because of his ties with the spring season. It can make for a good tattoo inspiration for a mother or father because of his fertility connotations. Kokopelli designs like this with a backdrop of mountains, valleys, rivers, and farmland are quite popular. As Kokopelli traveled from town to village, he was respected as a wandering musician who carries seeds for planting. Individuals have also added flair to this tattoo design by combining it with a deer (as shown in the image) or a turtle.

On the other hand, you may decide to combine pictures of the sun, stars, and moon with the Kokopelli. Free-spirited people have even replaced the Kokopelli flute with an instrument of their own. In the southwest, he was mentioned as children and tribe protector. Girls’ Kokopelli tattoos are quite popular as well.

Kokopelli’s importance in this moon tattoo stems from the fact that he may be seen on the whole as well as waning moons, much as the “man” or “rabbit” on the moon.” This is an excellent choice for people who want a simplistic tattoo design. Apart from being a Kokopelli tattoo, this tattoo employs a captivating and unique technique known as dotwork. Dotwork is a tattooing method in which the artist creates a stunning aesthetic impact with fine dots. In a simple black outline, this tattoo uses dot work to create shading and add a smooth texture to the design. Stippling is a type of dotwork used for shading. Dotwork tattoos are most often seen in floral motifs, geometric tattoos, sacred tattoos, and spiritual tattoos. If you’re looking for a pattern that’s a little unusual, try this dotwork Kokopelli art!

The Kokopelli tattoo, which includes a Mandala and a moon symbol, is a great alternative for someone looking for a tiny tattoo design. This tattoo’s meaning can be intriguing, and there are numerous ways to incorporate it into your image design. Many additional styles and forms may be integrated into the pattern, making it one of the most versatile tattoo designs available. This particular tattoo design has intricate details that show the beauty of the Mandala and moon symbolism showing the origin of Kokopelli. This design is charming and a sign of good luck and peace. You can sport this tattoo on the arm as show in the image here.

This psychedelic Kokopelli is a treat to the eyes and the mind! The blue fluorescent color used in the tattoo depicts calm and serenity to the mind, along with the design having a modern approach. Kokopelli is the hump-backed flute player, and his hump is usually attributed to the fact that he dances a lot. This tattoo depicts a fun-loving Kokopelli dancing to the melodious tunes of his native music. When the locals saw him visiting their hamlet, he was a symbol of happiness and excitement. Legend has it that Kokopelli would play his flute all night long as the villagers danced and sang. Some attribute his dancing as the reason for his hunchback, and some say it’s because he carries seeds of fertility all along wherever he goes, and that is why he is stooped. Whatever be the case, this tattoo design is unique and a charm of success, so get yourself one in any color, design, or make it psychedelic in your own way!

Music To My Ear Kokopelli Tattoos

Having the Flute-diety in your ear is a very unique and whimsical idea for a Kokopelli tattoo. This adorable Kokopelli is inked in black and grey along the anti helix of the ear. The design on the ears could depict that the person wants to keep hearing the music of the flute in his ears to gain wealth and prosperity. Minimalistic Kokopelli designs are subtle yet powerful in speaking a thousand words. This mini Kokopelli tattoo can be created on the fingers as well. A guy can opt for a landscape filled with dates, rain, snakes, or children playing in winter.

We all think that the Kokopelli tattoo design is superb, and it gives a gorgeous outlook of the person wearing it. But, how can you make your Kokopelli tattoo design more appealing? You can do that by adding different elements to the design, like the sun, instruments, or animals. The colour palette and pattern in this tattoo is quite unique. It has some colourful geometrical shapes along with leaves against the black background. Kokopelli’s head features numerous long antennas in the style of a mohawk. This enhances the flute diety’s appearance and makes him look even more pretty. This image conveys the impression of long hair standing upright or blowing in the wind. The hair is covered in red, orange, green and yellow spots against a black background, similar to the flute. The Kokopelli tattoo design is effortless to make every depiction of him can be imbued with life and progress. As shown in the tattoo design, the sun face shows us a very out of the box way to incorporate positive elements in the tattoo.

A colorful background tattoo will make your Kokopelli deity figure stand out and give it a very vibrant look. The colors used in this tattoo are blue, green, and yellow. All these vivid colors provide a sensory pleasure that’s sure to attract an audience. The diety is made with simple lines, and all other elements like sun, are outside the outline. The tribes also believe in a familiar world where humans determine to pray to their ancestry, cultures, and traditions. The Kokopelli tattoo represents many cultures and traditions of Native America and pays an homage to their life and ancestry. The color yellow is linked with the sun, happy faces, and sunflowers. The nose, head depicted in real-life form can be thick if you are interested in a more prominent Kokopelli tattoo. Different tribes have the concept of spring and rebirth depicted in ant form as per their culture and tradition. The Kokopelli tattoo also represents growth and regeneration, which goes well with sacred beliefs of people.

Kokopelli isn’t the same without his magical flute! If you haven’t figured it out yet, this is a phallic symbol. Kokopelli’s flute is really his erection in some paintings and interpretations! It’s rather impressive… Despite the fact that Kokopelli is a sexual creature, he is also a holy one. As a result, he should not be portrayed in a rude, violent, or stupid manner. With melodic notes flowing out of the flute, this tattoo shows Kokopelli singing and playing the flute. This tattoo is suitable for both girls and boys as an arm or ankle tattoo design. These small musical note components are a fun way to make your tattoo appear adorable and exciting. The Kokopelli tattoo meaning is sacred for many tribes in Canada too, as they are familiar with the native world.

This Kokopelli art design tattoo is quite stunning and depicts a fascinating story. The Kokopelli is said to bring rebirth and fertility, and prosperity and wealth. This design depicts the desert where Kokopelli plays his flute. Now because of his music, the rain has come, new plants have grown along with the cactus. Not only this, but the plants bear blooming flowers. The Kokopelli is the god of fertility, both for humans and in agriculture, and can be invoked to ensure abundant grain harvests and happy marital partnerships. The Kokopelli, to a lesser extent, possesses musical strength. Despite its mischievous tendencies, the Kokopelli should be revered and honored like other native religious symbols. Before permanently affixing it to your forearm, you can run the design past a local historical society if you want to ensure your tattoo reflects the true story.

The Benefits Of Trio Kokopelli Tattoos

Throughout human history, the sun and moon have been the topic of visual arts, literature, poetry, and many other forms of expression. This complex and detailed Native American spirit of Kokopeli is inked entirely in black, while the Sun is bright yellow and the moon, a soothing blue. The moon is the natural counterpart to the sun, just as the other natural counterparts – day and night, darkness and light, male and female. When joined in a design, the sun and moon signify a universal belief and representation of opposites coming together. The sun is a male figure in nearly all civilizations worldwide, and it represents strength and power. The moon, on the other hand, is a feminine figure that signifies tranquility and stability. In this tattoo, the essential concept of life is depicted with the sun and the moon, and Kokopelli in between the two.

Here are some more Kokopeli images and tattoo ideas that you can check out: