10 Best Kobe Bryant Tattoo Ideas You Have To See To Believe! 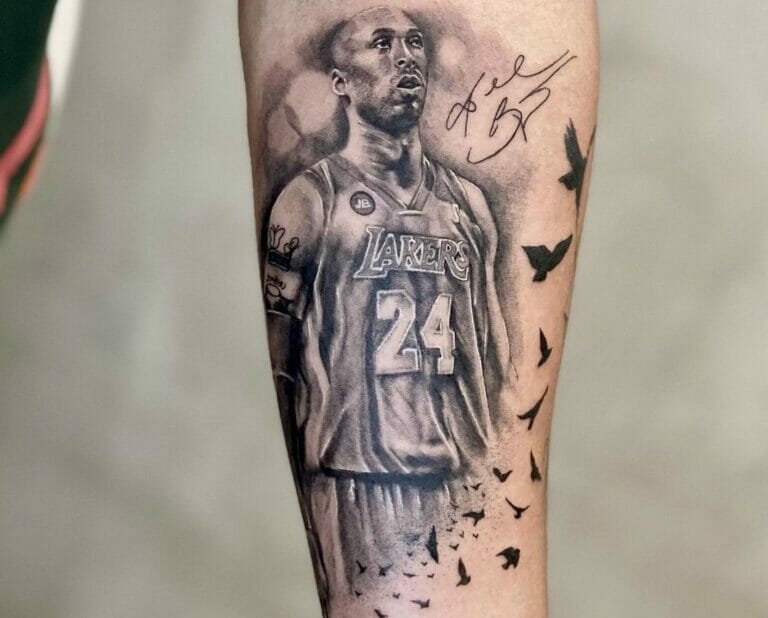 Kobe Bryant is the face of The Lakers.

Regarded as a legend of the NBA, Kobe Bryant was a talent that comes around once in generation. Kobe spent the majority of his life devoted to Basketball.

If you are wondering what is the Kobe Bryant tattoo meaning, then this article is here to help you. Kobe Bryant expressed his emotions through his tattoos, portrayed various aspects of his life. Kobe Bryant had tattoos like this Butterfly Crown tattoo with angel wings, dedicated to his wife, Vanessa Bryant. A paradigm of natural beauty, the butterfly crown is a long-standing symbol that represents faith, transformation, and freedom. Traditionally, the butterfly crown has also been closely connected to femininity and romantic love, which is why butterfly tattoo designs are so popular. Additionally, Kobe’s had inked the names of his three daughters on his right forearm. This artwork is done by the tattoo artist, Mister Cartoon.

Kobe Bryant’s latest tattoo design with the name of Capri Kobe could not be completed due to his tragic demise. Many fans of this legendary basketball player have Kobe inspired tattoos on their body as a permanent reminder of their hero. Vanessa Bryant recently got a tattoo signifying her grief due to the loss of late husband, Kobe and their daughter.

You, too, can honor the late player with tattoo designs that match your personal preference. Do read on to know about various tattoo ideas dedicated to the late player and what they mean! This is the right place to know more about a Kobe Bryant tattoo tribute.

The tattoo is based an iconic image of Kobe Bryant chewing his jersey, which was Kobe’s version of Michael Jordan’s tongue wag. This tattoo shows Kobe in a small card shape that fits wonderfully on your forearm.

It was revealed in an interview that it was Kobe’s father who taught him this trick to suck his own jersey’s sweat whenever his mouth got dry. Bits of Butterfly Crown tattoo on Kobe’s left hand can be seen as well in the tattoo.

This tattoo highlights multiple aspects about Kobe’s personality and athletic career. First, Kobe Bryant is wearing his championship jacket with his hand over the championship trophy. The jacket is depicted here in bold black and white graphic designs. Secondly, Kobe’s facial features and expression are quite clear here. Third, his jersey number 24, which was not Kobe’s original jersey number. At the beginning of the 2006 season, Kobe changed his jersey number from 8 to 24. He described this as a ‘clean state,’ a fresh start. This tattoo is labelled “LA Lakers” at the top, the team Kobe represented.

The artist shows a young child watching Kobe jumping for his shot with a serpent running through between his legs. Kobe Bryant was nicknamed Black Mamba. Black Mamba Snake is deadly whose venom can neutralize anyone in a matter of minutes. The snake represents unparalled agility, this is a trait that Bryant carried through his games. This tattoo also depicts both of Kobe’s jerseys and the journey he took. Kobe Bryant adopted this nickname at a tough point in his life, but continued to focus on his game but with the same zeal. Kobe Bryant partnered with Nike to launch the Mamba League, which gave hundreds of kids access to the sport of Basketball.

The tattoo features the ‘Los Angeles Lakers’ and Kobe Bryant, one of the most iconic duos in the world of NBA. The ‘LA Lakers’ insignia is featured twice here along with an ensemble of Kobe in various stages of his Basketball career. The picture at the top shows Kobe proudly displaying his jersey.

Kobe Bryant had started playing for the Lakers in 1996 when he was only 17 and became the youngest Slam Dunk Champion in 1997. One of the legends in NBA history with five championships, eighteen-all-star selections, one MVP, and many other countless achievements. The tattoo design beautifully captures two eras of Kobe’s career. You may get this inked on your leg or at the spot shown in the image.

The tattoo honors the late legend star, Kobe Bryant. The date shown in the tattoo is January 26th, 2020, when a tragic accident consumed the basketball superstar and his youngest daughter alongside other passengers, who were headed towards a basketball game at Mamba Sports Academy. The tattoo shows an old picture of Kobe celebrating a win. The stylised text at the bottom of the tattoo, which adds a personal touch to this tribute. This tattoo has showcased on the forearm and would make a great design for the leg as well.

Comparisons have always been made between basketball star Kobe Bryant and Michael Jordan. The tattoo shows a player jumping and taking the shot while the entire look split into two, showing both Michael Jordan’s black jersey and Kobe Bryant’s yellow jersey and their iconic shoes, Jordans and Kobe AD. This tattoo has bright, distinct colours on the shoes and jersey to show the parallels and similarities between the two basketball icons. The jersey number in the tattoo combines the digits of both Michael’s and Kobe’s jerseys. Both Michael Jordan and Kobe Bryant’s shooting arm was the right one. This tattoo is a great way to honour both legendary athletes that have had a significant influence on the new generation of players and the NBA.

The artist has inked Kobe Bryant’s jersey chewing scene image on the thumb. The whole tattoo has been inked in color black. The number inked on the thumb represents Kobe Bryant’s iconic Lakers jersey number. His face has been carefully inked, with his eyebrows, eyes, nose, and facial hair is perfectly recreated. The combination position of this tattoo fits really well on the thumb as well!

Number 24 signifies Kobe Bryant’s jersey number. The whole tattoo is in black within the outline of the numbers. Here the tattoo artist has recreated two iconic moments from Kobe’s 20-year-old career. In the first digit, we can see Kobe holding basketball rushing. Inside the second digit, Kobe is bending down and glaring across the court. Both of the numbers are created in the exact design, which is seen on Kobe Bryant’s yellow jersey. It is truly a piece of art. You may ink this on your wrist, arms or legs.

This is one breath-taking Kobe Bryant tribute that is sure to resonate with his fans! Here, Kobe Bryant, in jersey number 24, is seen holding his past self in jersey number 8, who has a basketball in his hand. This is shown as Kobe’s standing strong wit his old self and moving forward in life. This small but detailed design shows the athlete taking a fresh start instead of holding onto the mistakes and failures of his past self. This tattoo can be inked on your right arm or leg, as shown in the picture. Many people prefer the right arm, right shoulder, or the right bicep as a powerful show of support for the athlete.

In this clean tattoo, we can see the black mamba snake around Kobe’s jersey number twenty-four. The number is colored with a shade of yellow that pops out. This same bright shade can be seen on Kobe’s actual Laker jersey. The black mamba represents Kobe Bryant. The snake’s scales are inked beautifully, with bold, black ink using dot work to create depth. Inking this tattoo on your right bicep, arm, or leg would look really good!

Look at our suggestions if you are looking to get a Kobe Bryant tattoo.