10 Best Knuckle Tattoo Ideas You Have To See To Believe! 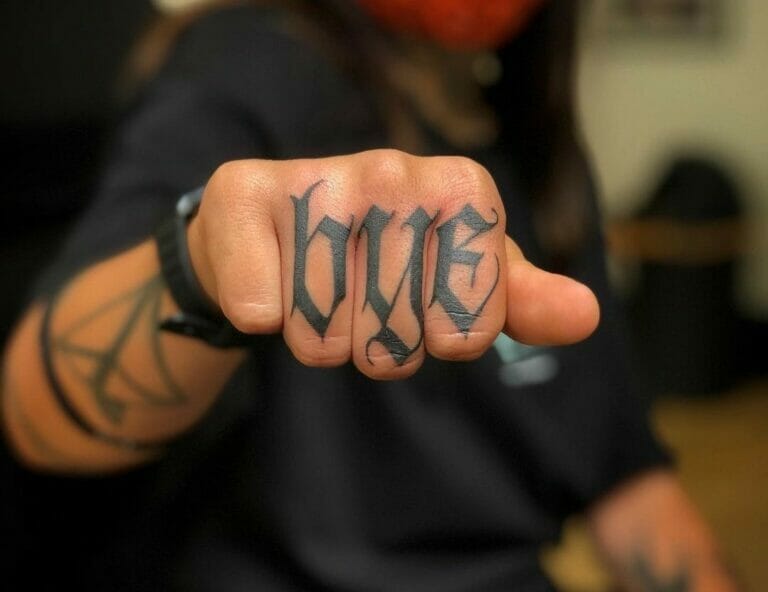 Are you looking for knuckle tattoo design inspirations? Here is a list of 10 popular ideas you can check out and knuckle up on tattoos right now!

A knuckle tattoo is a type of tattoo that usually consists of two groups of four-letter syllables or one eight-letter phrase.

The two groups of letters can be presented with amazing and unique fonts and styles. It is said that one of the most popular knuckle tattoos is from the film, The Night of the Hunter.

Having knuckle tattoos is a bold statement. Our fingers are one of the most sensitive areas on the skin. We use our hands for several daily activities, so they need to be precise in their movement and sensitivity. Fingers and fists have one of the highest numbers of nerve endings. In addition to that, they are not cushioned with layers of fat like the biceps, which makes getting a bare-knuckle tattoo even more painful. One of the most famous finger tattoos men are attracted to is the brass knuckle tattoo. The cool-looking graphics can be placed in many different places. Others include Hold Fast tattoo, Swan Song tattoo, and more. Adding color is optional, but red ink is widely known to give a more lively feel to the weapons. Some popular tattoo ideas include tattoo patterns and pictures on knuckles, frequently in groups of four, like the four symbols of a deck of playing cards to represent good luck or the three monkeys.

If you are wondering ‘what does the brass knuckle tattoo mean’, then the answer is that it means, ‘you can do what you want’. Brass knuckles are metal rings that are designed to fit around your lower knuckles and are supposed to be gripped by the hands. Among the professional military and athletes, brass knuckles tattoos are very popular. And if you’re a fan of weapons too, you should get one as well.

Let’s look at the top knuckle tattoos and find the best one for you.

By captioning words like “You always gain by giving love” here below the knuckle, letters are dotted. L, O, V, E – each letter for a finger. These small letters make a word that holds powerful messages. It is a hand-poked tattoo with black ink. The stick or needle which is used for hand poking the tattoos is a modified needle of a tattoo machine. It is a cute script tattoo with a simple design. It is said to hurt less. Despite being painful and hard to get, people do get knuckle tattoos as – it holds a powerful message that is deeply personal – stay true to self, family love, romantic love, have hope, will to live, religious inclination, and more.

Are you looking for queer tattoo ideas? The LGBT community has a history with tattoos. Tattoos act as a medium for them to be visible to others. This knuckle tattoo have two four-letter words with bold design. This tattoo shows the gender-neutral pronouns “they” and “them” tattooed on each knuckle. The scratchy letters are inked amazingly and in detail. It conveys a strong message that we must stay true our self. People with iconic LGBT symbols on their knuckles or finger tattoos show their support for those belonging to LGBTQ communities. Many tattoo artists refuse to do knuckle tattoos as the hand surfaces are uneven because of the bone structure. Another reason is our delicate skin around the fingers. It stings a lot during the process of getting a finger tattoo.

Nowadays, simple designs which include symbols have become one of the most popular designs. The small design of the sun here can either mean sunset or sunrise. This one knuckle tattoo is hand-poked with black in a minimal design. Small designs like this can be good symbols of hope and looking onward.

Getting a tattoo on the knuckle is always a painful decision. Finger and hand tattoos are considered painful to get and would not be considered a good choice if you’re aiming for the long life of your tattoos. In comparison, getting a tattoo on the knuckle would be more painful than any other body part as the hands and the fingers have more nerve endings than other parts of the body.

A barbed-wire tattoo represents strength and courage. Some symbols like these give people the strength to overcome their traumatic experiences in their life. Barbed wire is said to be dangerous as it can cause bleeding by cutting the skin or even death. Such tattoos remind us to cross a fence which could be painful. Such tattoos’ unique designs have a very great message. We can also see two tigers, one above each knuckle. Bold colors like yellow and black are used to create such an amazing design. In black and red, large letters, the fingers create two four letter words, ‘SELF MADE’. This is one of the most creative and badass tattoos.

Historically, it is said that the swallow tattoo is used by sailors to describe their sailing experience. The twin swallows represent prosperity, love, and rich family relations. The black ink used here is very apt for an occult tattoo like this. Other than the barbed wire and swallows, there are four symbols tattooed on each knuckle like the heart, spade, flower, skull, a guitar head and some more symbols. Such tattoos would be an amazing choice for anyone who wants to symbolize victory or freedom. In ancient times, for sailors who crossed 5000 miles, getting these swallows tattooed was a badge of honor. They were denoted as experienced and valuable sailors. Among them, it is believed that these swallows will carry their souls if they ever drown.

Knuckle Tats Of Words And Phrases

The phrase tattooed on the knuckles here is ” AND HOW DOES THAT MAKE YOU FEEL?” with each word occupying one finger and a question mark in the last one. This tattoo asks you to self-analyse and introspect. It gives one the strength to face any setbacks in their life. A tattoo becomes a symbol of progress on a road to recovery when it acts as a coping mechanism and becomes a form of therapy. Words have the power to give strength in life. If you resonate with this idea, you can get this awesome tattoo inked as a reminder of your road to self-discovery and growth.

This is the perfect tattoo with stylish and creative lettering for introverts. It showcases one eight-letter phrase reading, ‘Lone Wolf’ in large letters. A lone wolf is an animal that acts alone or lives or spends time alone rather than in a pack. The phrase is derived from wolf behavior.

A human lone wolf is someone that behaves autonomously and likes to do things alone, enjoys isolation, shows introversion, or works alone. A classic lone wolf’s disposition is grim or serious; they are generally taciturn and defined by their reserved attitude. It is an interesting tattoo design, often preferred by men.

This is one of the small and creative designs showing life inked on a person’s thumb.

A vine with leaves tattooed around the thumb such that it wraps around it. The leaves on the vine are outlined in black ink and the alternate leaves are filled in only dot work shading. The vine is used as a symbol of strength, determination, endurance, and progress among other things. This can be applied to our daily lives. Their tendrils, which can attach and hang tight to anything, represent sticking to an ideal, belief, or way of life in order to secure stability. It is an example of how simple designs and symbols can create deep meaning without lettering or different colors.

This badass tattoo design covers the entire palm and the fingers. And it is clear from its color gradients and fine lines that it was drawn by a very talented artist. Not only is it very bold and unique, but it has vivid and abstract imagery. A human skull is made to look like an octopus’s head with tentacles coming out of on each of the fingers. It has a punk and goth vibe to it due to its coloring and black background. You can also work with a talented artist to recreate this detailed knuckle tattoo.

This knuckle-up tattoo has the words BOOK WORM written on the fingers in simple letters. This tattoo is perfect for bibliophiles and readers. It represents the person’s own personality and gives a clear message that you like books! The font shows a very quirky personality and a clear indicator that you’re interested in fictional romantic novels. It looks like it’s been tatted up messily but that’s the message hidden in it. It’s meant to show a person’s charm. If leafing through the pages of a novel is your favourite past time, this tattoo is perfect for you!

A tattoo on the knuckles hurts a lot. Most tattoo artists agree that getting a Bare-knuckle tattoo stings more than most other parts of the body. However, the pain depends on the person and also the skill of the tattoo artist or the tattoo design. Someone with a higher pain tolerance might not feel much pain while getting a hand tattoo.

A knuckle tattoo is a type of tattoo that usually consists of two sets of four-letter words or one eight-letter word. It is not necessarily a jail tattoo like some people assume. Yet it remains an undesirable type of tattoo—along with hand tattoos in general—due to the difficulties of concealing it in settings such as a formal setting where it would be considered vulgar. Love-Hate or the Hold Fast tattoos are some of the most prominent knuckle tattoos. The Love Hate tattoo was made famous by Robert Mitchum’s character Reverend Harry Powell in the 1955 film ‘The Night of the Hunter’. Popular designs also include astrological symbols. There can also be more complex tattoos such as realistic portraits and detailed drawings. For more inspiration, here are some awesome tattoo ideas :