10 Best King Tattoo Ideas You Have To See To Believe! 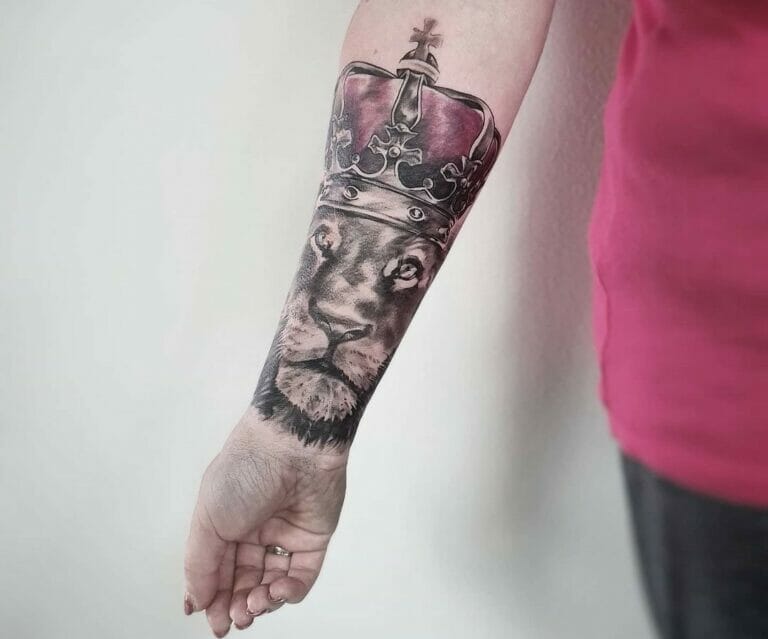 Looking for a king tattoo to flaunt your royal personality? Then this is the place for you. Listed below are some of the best king tattoo ideas.

King Tattoos are some of the most popular tattoo ideas that are in demand and are often found on trending lists.

Most of us have always dreamt of becoming a king or a queen. Whether or not one is born into royalty does not determine anything – one’s nature is what projects the true worth.

So no matter what the rest of the world says, if you believe you are a king and want a king tattoo, then go for it.

Tattoos often represent our inner desires, thoughts and emotions. Every detail in the tattoo says something or the other about the person’s style and often reflects their inner hidden self.

King tattoos have exciting and sometimes sophisticated visuals that can be in sync with the person wearing the tattoo. It comes in all shapes and sizes and is beautiful to look at. They also have different meanings and symbolize a lot of things such as one’s bravery, one’s dream, one’s glory and power, one’s loyalty and many more. These qualities are appealing in a way it reminds one of their strength as well as the fact that these qualities are all it takes for one to succeed.

But the best part about it is the fact that depending on your fashion and style you can customize it with a lot of symbolism that specifically represents you as a person and your art. From matching tattoos to lion tattoos to crown tattoos, so on and so forth. So if you are looking for some ideas, this curated list is just for you as you never know one out of these popular tattoo designs given below could be the inspiration for you and could be the one that you can use for your next tattoo.

This tattoo symbolizes exactly what the caption of the post says that is “A king represents the head of the pack, the leader and a protector”. Anybody can be a boss, but it takes a lot to be a leader. The tattoo is unique in a way it says “live like a king” as life is too short to not be one. The intricate design of the crown is hard to achieve and depends on the experience of the tattoo artists. The details and the shading of the moustache are all that makes it life-like.

Yellow King tattoo is an inspiration from the character from the book “The King in Yellow” by Robert W. Chambers, a horror text. The symbol is a fictional symbol, but its purpose is undefined even today but is said to possess a siren call to the dark world of the King in Yellow and it brings doom to those who are exposed to it. The skull with a crown on a card, a very beautiful dark concept. All the shadings of the blank ink in the right places make it so cool and unique. The crown is nothing like other crowns and is glorious.

A perfect pretty tattoo for all the people out there who prefer smaller tattoos. A minimal tattoo design with incredible delicate details might look easy to replicate at first but once you look into it, it’s difficult to place all the details in such a small piece. The glowing halo is an intelligent touch to this tattoo and brings out the features of the crown. The placement of the jewels, the curves and the symmetry is pleasing to look at and would make you feel a part of royalty. You could use your own style like adding initials of your name with the crown to make it more personalized.

Lion With A Crown Tattoo

Lions as we all know are known to be the kings of the jungle. A lion black ink tattoo on top of a finger could be a perfect symbol to display power and royalty. It wraps around your finger like a ring, could be a way to manifest your bravery. Being afraid is not cowardly, as a matter of fact owning up to your fear and overcoming it is bravery. A lion with a crown tattoo symbolizes a bravery as such and reminds you of your inner power which even though you feel like it is not there and it is in fact there within you. Finger can be a little difficult place for a tattoo with details as such, but if the outline is replicated perfectly, it would be one of the most amazing tattoos of all time. But if you want a big one with the same design, you can always do it on your arm, forearm or thigh.

Queen And King Of Hearts Tattoos

If you and your partner are planning to get inked then this tattoo art idea which is cute yet royal can make you feel inspired. These king and queen card tattoos can be the one for you and your lover. It is not some ordinary tattoo design as unlike the other popular matching king queen tattoos, this tattoo pair is a bit unique and colourful. King and queen of hearts represent royalty as well as the undying love between the lovers. A perfect wrist tattoo pair, if you are going for a design meaning to show your love for each other. A tattoo design that you will never regret and the placement can be anywhere.

One of the most loved franchises The Lion King can be a great tattoo inspiration. There is not a single person of this generation who does not know Simba. A brave lion cub who was forced to grow up when his father was killed is the sign of bravery, leadership that a king possesses. And hence the lion king tattoo of Simba with a crown on his head could symbolize a hidden underestimated gem who can be the bravest when needed. The outline of this tattoo is rough and that is what makes it easier to replicate in any part of your body. It is cute and could also be used as a tattoo by the fathers as a dedication to their children.

A throne is genderless, hence can be used as both king and queen tattoo designs. Add a touch of your sparks and make it personal. The complex details in the shading and design make it feel like the real texture of a throne and could only be achieved by a tattoo artist with a lot of focus. Without those details, the throne won’t look as real as this tattoo. The throne can symbolize a lot of things depending on one’s interpretation. It could symbolize authority, glory, mastery and so and so forth. So if you are looking for a tattoo that would speak louder than words then wear this on your skin like it belongs to you.

This tattoo can be interpreted in several ways, one being the fact that people don’t see the actual truth behind the life of a king, the wounds or the scars of a king symbolizing a King’s sacrifice for his empire but only the power and authority is put in the front. This tattoo can act like all the problems and triumphs one had and has to go through which forever remained and remains unspoken, also could be portrayed as one’s journey that remains unwritten but shared to the world through this tattoo. The black ink brings out the red colour of the scar and the green colour of the eye and could be the one for you that also acts as a comfort in the memories of your hardships.

A tattoo that presents two different messages and could be used in two different ways. Everyone is remembered even after death for the things they have done in life. But one can choose to die with a legacy or a bad reputation. Hence it could symbolize your king-like greatness that will be remembered even after your death. Or it could be a dedication to a loved one who was in your life who died a hero as this tattoo could act as a symbol of respect for them and to carry forward their legacy.

Another matching king and queen tattoo design is a symbol for you and your partner to display your love for each other. This is one of the most popular designs but adding extra details, such as your initials instead of Q and K and adding colours in your jewels of the crown could help you give a personal touch. It is simple and minimalistic and is perfect if you are a beginner.

As free-spirited people as we tattoo lovers are, we might be impulsive at times, so it is suggested to give a lot of thought to your tattoo designs before getting one. It is for a lifetime and you would not want to regret your decisions. So choose a tattoo design that brings out your personality and that represents you as a person.

Few more suggestions that also go with the king concept tattoo ideas are: