10 Best King Of Hearts Tattoo Ideas You Have To See To Believe! 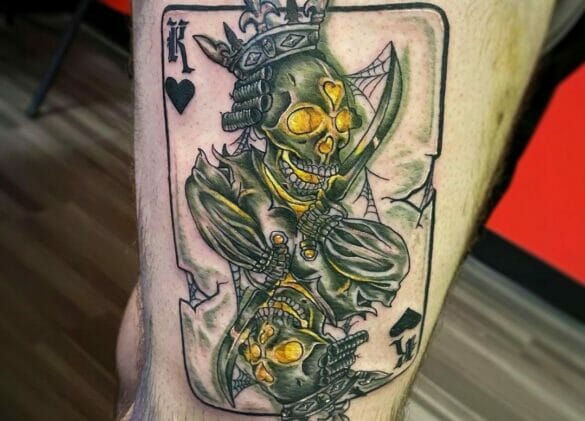 If you are a fan of indoor games and interested in the game of cards, then this list of the king of hearts tattoos is definitely for you.

Getting your favourite playing card design tattooed on your skin is a common choice for many.

But tattooing a single card can also be quite a difficult choice to make, considering a deck consists of 52 different cards. Each of the cards denotes an entirely distinct meaning – the ace of diamond will symbolise something wholly different from that of the three of clubs.

All of the cards have a fascinating history as well as cultural symbolism attached to them. However, this article will solely discuss the king of hearts card. The king of hearts is one of the most powerful cards of the deck, be it poker or blackjack. There are four kings in a deck and each symbolises a monarch of the time –

Charles VII was an unstable monarch but the only one in the pack who is said to have been alive long enough to see his representative card coming to fruition. The card came into fashion at the onset of him sitting on the throne but he was able to play with them years later when his health failed. He was diagnosed with a high fever and he lay on the bed playing with the cards. It is said the king got delusional at the end and used to blame his failing health on his representative card, the king of hearts being the 13th card of the deck. He was deemed to be insane and the king ended his life by suicide by pushing a large sword through his head. The card was later modified to display the image of a king with a sword running through his head. Even though with time, the imagery on the card became less graphic, you can spot this if you look closely.

The heart is a symbol of love and yet the king of hearts has the tragic story of the suicide king attached with it too. If you are looking to get this specific card tattooed, then this specially curated king of hearts tattoo list is a must-read for you.

This particular king of hearts tattoo narrates the story of the mad ruler, Charles VII of France, as mentioned above. The design depicts the stable monarch on one side, and his final delusional state which led him to take his own life on the other end. The sword running through the head of the deranged monarch, in the end, gives it a graphic appearance overall but also symbolises the tragic ending of one of the most animated rulers of all ages.

Unlike the above design, this king of hearts tattoo gives an elegant look to the whole affair of Charles VII. Here also the monarch is depicted with him putting a sword through his head, but the delicate detailing and ornamental appearance of the ruler make it less gruesome. This particular tattoo is almost poetic as it shows a calm expression on the face of the mad monarch as he finally lays down his life with his bare hands.

King Of Hearts And Ace of Spades Tattoo

With a global pandemic raging on, all of us have been forced to stay indoors for nearly a couple of years now. This has given rise to a renewed interest in indoor games and a pack of playing cards enjoy unparalleled popularity among them. If you are hooked to that occasional game of poker or bridge after work, then this tattoo is a great way to show off that interest. This king of hearts tattoo is coupled with that of an ace of spades and is perfect for you if playing cards is a hobby of yours.

This particular king of hearts hand tattoo shows Charles VII in a different manner. Instead of the gory image of a sword running through his head, this tattoo shows the sick monarch in his final state of delusion and depression. The expression on his face is that of forlornness and while the monarch is drawn in shades of grey, the strikingly red heart in the middle lends the whole tattoo a stunning look.

King Of Hearts And Skull Tattoo

This king of hearts card tattoo is another gory depiction of the suicide of Charles VII of France as he ran a sword through his head in the end in a delusional state of mind. It is a symbol of insanity and delusions the deranged monarch suffered from in the final stages of his life and is a perfect tattoo for history buffs as well as those who identify playing cards as their hobby.

These king of hearts tattoo designs portray a couple of skeletons in royal attire surrounded by a bouquet of roses. While the roses symbolise love, the skeletons are a reminiscence of the tragic ending faced by the monarch that this card represents – Charles VII of France. The contradictory symbolism of these cards make for a fascinating tattoo subject and can be a real eye-catcher if executed properly.

This tattoo portrays the queen of hearts accepting a rose from a veiled skeleton, thus depicting the choices we make in love, how immoral it may be. You can choose this work of art if you might have just got out of a relationship and close that chapter of your life forever.

Most of the tattoos in this list have intricate and complex designs that may prove to be a bit too much for those getting inked for the first time. However, this minimal queen and king of hearts finger tattoo are ideal for first-timers as well as those on a shoestring budget. These minimalistic tattoos cost less and yet deliver the same boost in fashion you are looking for. Choose to get these matching tattoos with your partner to show off your relationship to the world.

If you are into playing card games, you will note that this is one hell of a lucky hand and will ensure that you have won the round in the game of bridge. Get these playing cards tattoos if you are really into card games and wish to announce that to the rest of the world.

King Of Hearts And Five of Spades Tattoo

Playing cards is a great way to spend time with your buddies and the occasional round of poker or bridge might be an exciting manner of passing those hours. Get this king of hearts and five of spades tattoo if you consider playing cards to be much more than a hobby.

Getting a tattoo inspired by the playing cards has been an age-old tradition and judging by their popularity, they are here to stay. As always choose the tattoo that best compliments your fashion and style and always go for experienced and professional artists to save yourself from future skin problems. Happy inking!

Still looking for inspiration, then checkout this blog post about Skeleton Hand Tattoo.