10 Best King Kong Tattoo Ideas That Will Blow Your Mind! 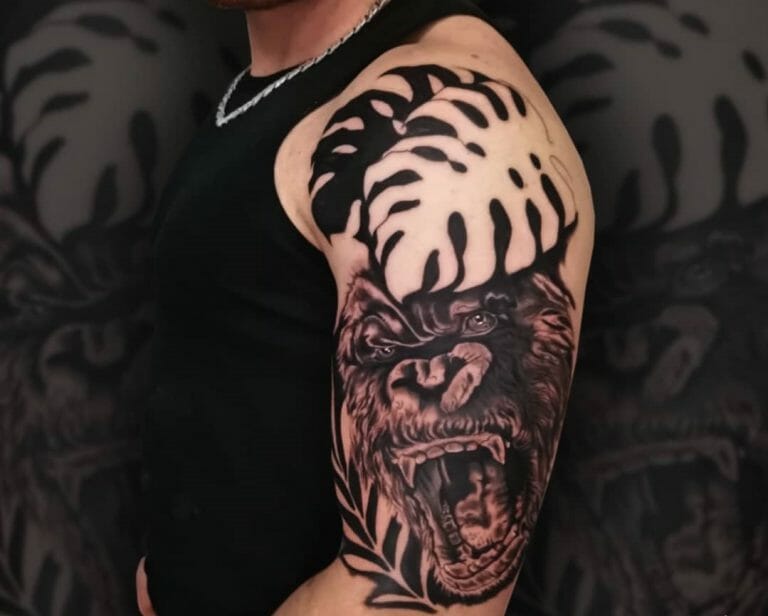 Are you a King Kong fan? These ten crazy King Kong tattoo ideas below will surely blow your mind. Have a look!

With the release of ‘Godzilla vs. Kong’ in 2021, members of the tattoo community started revisiting different tattoo sites for their favourite King Kong tattoo ideas.

King Kong is a fictional pre-historic monster that is often called the ‘eighth wonder of the world’ within the films under the King Kong franchise. Kong, a giant gorilla from the imaginary Skull Island is shown to possess a slight ray of human emotion.

King Kong, the brainchild of Merian C. Cooper and Edgar Wallace first hit the cinemas in 1933. With subsequent releases and re-releases, King Kong emerged as an iconic figure in the arena of fantasy films, dealing with the brutality of civilised humankind. Cinemas under the King Kong franchise are respectively ‘king Kong vs. Godzilla'(1962), ‘The Son of Kong'(1962), remakes of 1933 cinema in 1976 and 2005, ‘King Kong Escapes'(1967) and ‘Kong: Skull Island'(2017).

No doubt, such an iconic character found its way all to the tattoo industry to continue its legacy of extensive popularity. Men are seen to be more interested to get these king-sized King Kong tattoos to boast their aggressive nature as well as to flex their childhood favourite character.

Look Down To See Your King Kong!

Feet tattoos are extremely popular among the crazy, fun-loving tattoo lovers and getting your favourite King Kong and fierce lion tattoo on your feet will definitely make you the coolest one in your squad. These two tattoos fit right in the feet of the owner and are enough to blow anyone’s mind with their fierce looks.

Who can forget the iconic battle in this 1962 cinema? This tattoo owner knows how to flex his favourite fantasy cinema and we absolutely understand his feelings. The tattoo is based on the original version of 1962 cinema and has been drawn accordingly. The inclusion of the orange colour makes the entire tattoo more vibrant. Kudos to the artist for the perfect traditional presentation.

When it comes to a King Kong tattoo idea, a splash of colours on your regular Kong tattoo can change the entire game. This cartoon representation of the angry beast in bright colours is sure to deliver a quirky vibe and will make the tattoo enthusiasts stand out from the boring tattoo holders.

This is definitely not the one among those giant gorilla tattoos and yet finds a way to your bucket list. These black bold lines provide the necessary definition to this black King Kong skull tattoo. The artist purposefully added no colours other than black to make it bold and beautiful and simple at the same time.

Bordered by fine and bold black outlines on the background designs, the dot work single-handedly controls this entire King Kong tattoo. The gorilla is not given an outline sketch and the dots successfully bring out the required fierce face of the raging face of power and strength. The flames of his anger and his big mouth improve the quality of the tattoo.

There’s an unofficial rule that says not a single King Kong tattoo idea can be drawn in a minimalistic way. If you are interested in getting one small King Kong tattoo, then your palm is the best place to get it done. The basic linework with a touch of red tint on the eyes is enough to fulfill your desire.

This old school tattoo links the gigantic monster of pre-historic nature with this immensely loved cartoon show SpongeBob SquarePants. Plankton is the villain of the SpongeBob cartoon series and is seen to make the monster scream in pain. Roses are associated to increase the brightness of the tattoo. A lively crossover with a bright background can be an inspiration to many other crossovers.

Classic King Kong lovers will spare no time to pick this traditional King Kong tattoo as the best one for their tattoo game. This one, if not entirely, resembles the poster of the first film of the King Kong franchise released in 1933. The fine linework and the grey chest cease the giant black body of Kong from becoming a giant disaster. The use of colours is minimal to balance the whole application. The clouds and the sun in the background make sure to complete the look.

Before we comment on this King Kong tattoo, let’s give the artist a standing ovation for his outstanding work. Look at those detailed and distinguished features of the beast. The sheer talent and patience of the artist ensured the distinct appearance of those pair of glittering eyes amidst the killer black presentation. The white line strokes balance the whole outlook while the skilled shading gives the mouth its coveted prominence.

Last but not the least, a classic angry gorilla face is a must to conclude this content of King Kong tattoo designs. Those infuriated eyes bring back the childhood memories of relishing the aggressiveness of the eighth wonder of the world on the screen. The tattoo is bordered by bold black lines and vibrant colours fit right in the face and mouth of the angry gorilla.

Here are some more King Kong tattoo designs for you. Happy inking!