101 Best King Crown Tattoo Ideas You Have To See To Believe! 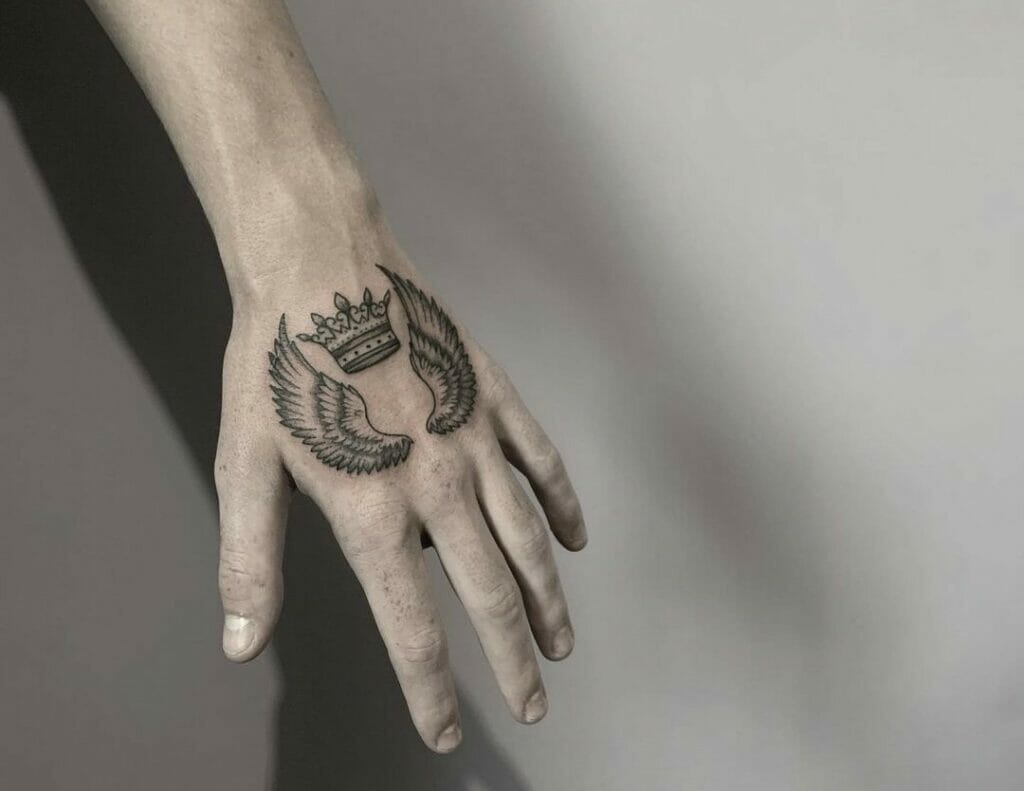 If you are a man looking to get a tattoo laden with powerful symbolism, then this list of king crown tattoos is definitely for you.

We all want to get a tattoo that will best compliment our personality and will also be rich with symbolism.

For men, crown tattoos check all those boxes and many more. The crown is associated with power, royalty, strength, control, and power.

You will find hundreds of variations of these crown tattoos for men available in the market. And as always when there are too many choices available, some of us usually tend to go wrong. This article aims to narrow down the number of crown tattoos to the minimum, featuring the best designs of them all, to help you in making your choice. Men who elegance and tradition will opt for the classic black and white royal crown tattoo, while those who consider courage and royalty as their virtues will go for the African lion donning the crown tattoo. One of the best things about the crown tattoo is size does not matter as both large and minimal ones work just fine. You can also go for big bold ones or a rather simple, subdued, and understated crown tattoo design.

This specially curated list of king crown tattoos feature almost all the variations there is, from traditional crown tattoos to couple crown tattoos. Attached with each tattoo design is the rich history and deep symbolism as well as cultural significance generally associated with it to give you a deep insight into what might be your next body art.

Though this list tries to cover almost all variations, it is certainly not an exhausting collection of king crown tattoos available. However, if you are looking to get a king crown tattooed, it might be worth a read.

Often referred to as the king of the jungle, it hardly comes as a surprise that the tattoo artist community will come up with various tattoo designs showing the lion wearing the crown. These crown adorning lion tattoos create powerful imagery that is unparalleled for the majestic beast represents all the virtues one may look for in a man – strength, courage, and royalty. Coupled with the crown that symbolises control, victory, and power, this king crown tattoo makes for an obvious choice for all men out there.

The Hereditary Crown Tattoo On Hand

For centuries, the crown has been the representative of power and monarchy as it is inherited by the sons from their fathers along with vast wealth and kingdoms. It symbolises the hereditary and royal dynasty like no other tattoo. This particular crown tattoo pays homage to that ritual or tradition as it portrays the passing down of the crown from one generation to another in a fascinating depiction – an adult hand putting the crown in the ring finger of a baby. Even though the monarchial rule has been long abolished, you can get this tattoo to celebrate the birth of your successor as you will pass the family baton to them one day eventually.

Often more than ever, the best crown design is the one that is simple over deliberately complex designs. Yes, intricate and highly detailed designs are appealing for most, but some people opt for a more understated approach. The use of extensive shading and the use of classic black and white tattoo inks lend it the simplicity some may prefer, but the majestic finishing is undeniable if executed perfectly. Go for these tattoos of simple crowns if you want to show the world that you are a powerful individual borne of humble roots. Owing to its size, the small crown tattoo design can serve as even a finger or an ear crown tattoo.

Getting matching king and queen crown tattoo designs have been the favourite choice of couples for time immemorial now. Yet, it remains quite a classy and unique manner of expressing your love for each other if done perfectly. We suggest this simple yet elegant choice of king queen crown tattoo designs that is minimalistic in look yet royal in nature. The minimal design means it can be placed anywhere on your body – from the back of your neck, your shoulder, wrist, or even behind the ear. However, this particular queen and king crown tattoo design work best when inked on your fingers. The calligraphic style of how the king and queen have been inscribed on the finger is a little bit tricky and is best to opt for experienced tattoo artists to be executed flawlessly.

The Grayscale Crown Tattoo Of Elegance

With the advent of new technology in the tattoo industry, super cool new ink colours as well as many new techniques have been introduced in the world of body art. However, even with a whole new palette of ink colours on the table (even neon ones), the appeal of the classic black and white ink colours have not waned. They continue to dominate the tattoo circuit and a tattoo done in these ink colours with perfection remains unparalleled. This dynamic grayscale crown tattoo bears testimony to that and the subtle use of shading and colour combinations add a whole new dimension to the overall tattoo design. The intricate detailing of the crown lends the royal touch that a tattoo of this head adornment demands.

Not all things are better when they are bigger in size and a classic example of this statement is this simple king crown tattoo. Minimalist designs have been trending in the tattoo community lately because alongside being cost-efficient, they have great versatility too. You can get these small tattoos inked on any part of your body – from the wrist, neck to fingers. Also, complex and large tattoo designs tend to be a bit too overwhelming for first-timers or those on a shoestring budget. However, this small king crown tattoo is perfect for such people and the extensive use of shading and intricate detailing add a nice touch to the crown tattoo.

Many artworks of the Italian maestro, Michelangelo, have made it into the tattoo community as popular designs. One of his most famous works, the sculpture of David, is also a common enough theme in tattoo art. The giant size of the sculpture of David was made by the Italian Renaissance genius to proclaim the victory of the town of Florence in the struggle of becoming an independent city-state. David was the symbol of triumph over tremendous odds and this breathtaking work of body art pays homage to Michelangelo’s sculpture in a unique way. Especially, the melting golden crown on top of David’s head, as gold drips down his face, is a stunning addition and adds a whole new dimension to the tattoo. Get this tattoo inked if you are a fan of Michelangelo or an art connoisseur in general.

The Name Crown Tattoo On Neck

Most of the crown tattoo designs on this list are ladened with deep symbolism, cultural meanings, and rich history. However, some want to make their own tattoo personal and not always some design that is very meaningful or complex in look. After all, for some of us getting a tattoo is not showing off to the whole world but a personal choice that does not always need to be visually stunning or impressive. Getting inked with a design that has been customised only for you makes it a lot symbolic for some and a crown tattoo with their name inscribed below is possibly the best one for such people. People also often tend to have the name of their family members, parents, love interests, or that of a recently deceased friend inked on their skin. The crown tattoo is very versatile and works with any name you inscribe below and whatever relationship you may be sharing with them.

Combining a crown tattoo with that of a skull might seem a pretty unconventional choice for most. However, it is undeniable that the tattoo design borne out of the combination of these two tattoos make for a fantastic and cool design. Such design is often preferred by gamblers who consider it to be their lucky charm and symbol of good luck and fortunes. Some even choose to add other symbols such as a poker chip or a deck of cards to these crown tattoo designs. The crown represents self-control, leadership, and power, while the skull is symbolic of death, protection, and strength.

All in all, the king crown tattoo is a terrific choice for men and even women with slight variations to the designs. The crown tattoos come in all shapes and sizes and it is important to choose the design that you are most comfortable with and goes best with your choice of fashion and style. Due to their varying sizes and complex designs, it can be quite hard to choose for those getting inked for the first time. While this article acts as a guide, it is best to consult your tattoo artist at the same time to get an optimum picture. An experienced and professional tattoo artist will help you to choose the best tattoo and also zero in on the placement options of the tattoo on your body. Look for referrals and suggestions before choosing the tattoo studio or artist and evaluate your budget as well. While money is critical, it is also important to note that a professional tattoo artist will not execute the tattoo perfectly but will also give you a hassle-free experience and save you from future skin issues.

What does a king crown tattoo mean?

A king crown tattoo typically represents power, authority, and leadership. In some cases, it can also represent royalty and opulence.

What are some popular designs for king crown tattoos?

How much does a king crown tattoo cost?

The cost of a king crown tattoo will vary depending on the size, complexity, and location of the tattoo. Generally, larger and more intricate tattoos will cost more than smaller and simpler designs. Tattoos located on visible areas of the body such as the chest, back, or arms will also typically cost more than those located on less visible areas such as the hands, feet, or neck.

How big should a king crown tattoo be?

The size of a king crown tattoo will depend on the individual’s preferences. Some people choose to have small, delicate tattoos while others opt for larger, more elaborate designs.

Where is the best place to get a king crown tattoo?