10 Best Keyblade Tattoo Ideas You Have To See To Believe! 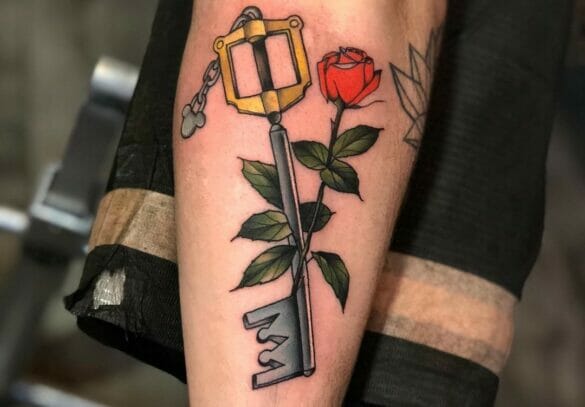 Huge fan of ‘Kingdom Hearts’ and want to tattoo your love for the video game on your body? We’ve got exactly what you’ve been looking for.

“Don’t worry. There will always be a door to the light.” – King Mickey

Congratulations on you’re Keyblade achievement! You’ve been chosen as the next owner!

Kingdom Hearts came out in the year 2002 which revolves around Sora, the protagonist, and his two childhood friends, Riku and Kaira, from Destiny Islands. One day, when Sora, Riku, and Kaira were playing, they saw a portal open, and little did they know, their life was about to change forever. From the portal, a bunch of shadowy figures appeared, known as Heartless. Just when Sora tried to fight the Heartless, he mysteriously obtains a weapon called the Keyblade. The Keyblades are not just any ordinary key to a door, but an extremely powerful weapon that could fight Heartless and mend a broken world. During this encounter, Sora and his friends go in separate ways and thus begins the adventure of these three friends who set out to find each other whilst save the world from darkness. Sora befriends Donald Duck and Goofy, who were following King Mickey’s instructions to find the key. The series takes us on an emotional journey with Sora and his friends and has won the hearts of millions by having them hooked to the show right from the beginning by making us relate to the characters personally. The best part that makes this franchise stand out is the Disney and Pixar crossovers. Sora and his friends, throughout their journey meets a lot of characters like, the Beast from Beauty and the Beast, Maleficent from The Sleeping Beauty, Mickey Mouse, who plays a major role in this series, and a lot more. Mickey Mouse in this video game series is not just a cute little mouse but the wise and strong King Mickey who leaves his world to fight the increasing darkness. With a plethora of Disney and Pixar character crossovers, this video game series makes it a great tattoo choice for fans to enthusiastically show off their love through several Kingdom Hearts tattoo designs that also includes one of the most important objects in this franchise are the Keyblades that like we mentioned earlier, are extremely powerful. A Keyblade shares a strong link with its owners and it kind of does work like the wands from Harry Potter. Now that of course also means that you have to be a Chosen or a Successor to own a Keyblade. Here are some of the most amazing Keyblade tattoos that you will ever come across to help you fight off the Heartless.

The legendary Keyblade from the Kingdom hearts series, the χ-Blade, was fought for by many in the ancient Keyblade War. Although χ-Blade was broken into twenty pieces; seven of light and thirteen of darkness, it has caught the attention of Master Xehanort who wants to bring back the balance of light and darkness into the world. Take charge of the χ-Blade with tattoo design and help the world of Kingdom Hearts in keeping away the darkness.

When Sora uses Kairi’s Wayfinder charm as a keychain, his Keyblade forms into the Oathkeeper Keyblade. Its teeth are identical to the Kanji character for ‘Light’ (光) which provides a symbolism of a ‘Light’ Keyblade. If the Oathkeeper is your favorite Keyblade, you definitely need to consider this cool tattoo design.

In contrast to the Oathkeeper Keyblade, the teeth of an Oblivion are symbolism of ‘Darkness’ due to its resemblance to its Kanji symbol (闇). What makes this particular Oblivion tattoo perfect is the color black which symbolizes ‘Darkness’. You can also alternatively get a tattoo of the Oathkeeper and Oblivion (Light and Darkness) duo like the tattoo below:

The first Keyblade that appears in the entire series is the Kingdom Key that Sora obtains during the Heartless attack on Destiny Islands. You can get a Kingdom Key tattoo like this on your forearm or any location of your choice and defeat all those Heartless with just a swoosh.

King Mickey also wields a Keyblade, KingdomKey D that resembles exactly Kingdom Key but one with color inverted detail. You can also optionally get a duo tattoo of Kingdom Key and Kingdom Key D like the one below:

Riku’s primary Keyblade, the Soul Eater, initially appears in Traverse Town when Riku defends Sora from the two Soldiers. Fun Fact: The Soul Eater Keyblade can be summoned by Riku at his own will, just like Thor’s Hammer! Ink this beauty with a demonic wing like this design and fend off the Heartless with an extra-powerful attack.

The Crown is earned by Sora once he starts acquires his first proof and as the proofs keep upgrading, the crown does too. Jump directly to the Gold Crown upgrade with this easy tattoo cheat code.

Okay, tell us, what does the color scheme of this weapon remind you of? Yes, Peter Pan! Sora receives this Keyblade from Peter Pan. This Fairyharp tattoo design, with a pinch of pixie dust and a Peter Pan flying, is perfect if you’ve wanted to have the key to Neverland.

Sora receives the Pumpkinhead from Jack Skellington when he locks the keyhole of the Halloween Town. If you’re a fan of a good ol’ Halloween theme, we bet this tattoo would catch your attention in an instant.

The Kingdom Hearts has a lot of faint resemblance to the Harry Potter story and this tattoo without a single ounce of doubt makes a lot of sense. Plus, can we all please take a moment to appreciate the stunning piece of art done by the artist?

If your quest for your favorite tattoo design has not ended, do check out our suggestions: