10 Best Keith Haring Tattoo Ideas You Have To See To Believe! 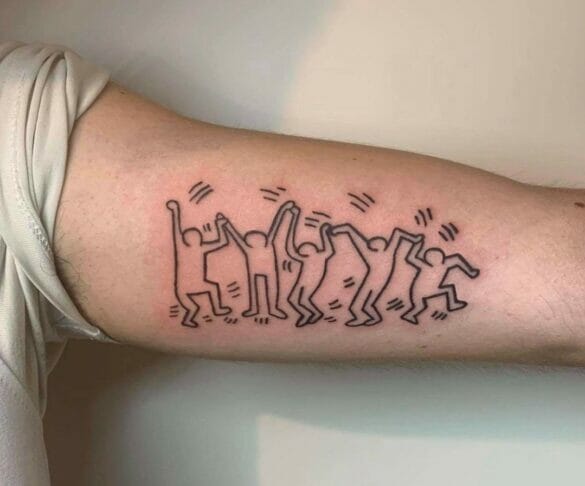 Looking for iconic pop culture art pieces as tattoos? We’ve got you covered with 10 cool Keith Haring tattoo ideas for your next trip to your tattoo artist.

“See, when I paint, it is an experience that, at its best, is transcending reality.” – Keith Haring

A street art genius, Keith Haring lived the life of an eminent artist. Super cool graffiti with a deep meaning, Keith Haring tattoos are the best options for your artistic taste in tattoos.

Born on May 4th, 1958, in Pennsylvania, Keith Haring was an American artist and activist who earned his popularity through the graffiti subculture in New York City during the 1980s. Keith Haring was a gifted artist whose art was although simple but carried a greater meaning. Before Haring gained his popularity, he would randomly buy a piece of chalk in the subway and sketch out stick figures and outlined visual imageries that involved figures, dogs, etc. He was hugely inspired by the pop art culture and his main goal was to make art accessible for all. At a glance, these sketches would look like just a child’s drawings, but what made Haring’s paintings stand out were the deeper meanings captured in a simplistic art form. He would make as many paintings as 36 a day and once he caught the public eye, Haring started producing a lot of commissioned artworks as well. He later even opened up Pop Shop to sell his artworks which mostly revolved around concepts like love, death, life, sexuality, and activism. His artworks were mostly a response to the political upheaval around that time. Many remark Keith Haring to have a mind of a child, who, although died at a young age, lived every day of his life to its fullest. A few of his most notable works include Keith Haring Mural, Radiant Baby, Crack is Wack, Free South Africa, and Andy Mouse. Okay, a fun fact about Andy Mouse. Keith Haring met Andy Warhol post his second art exhibition and soon found out their mutual admiration for Walt Disney, which inspired him to create a combination of Mickey Mouse and Andy Warhol. There are a lot more things about this legendary artist cum activist that we could go on and on about and it would still never be enough to appreciate Haring. Haring’s artworks are becoming more and more popular in the world of tattoos and the reason is self-explanatory. Simple outline artworks carrying deep meanings are a go-to for many ink admirers and a great way to show off one’s admiration for graffiti. If you’ve been looking for Keith Haring-inspired tattoos lately and love graffiti, bring the world of graffiti into your body and steal the limelight among tattoo admirers.

Keith Haring’s arts often included figures holding up a heart (the symbol of love) just like this tattoo that signifies optimism and hope of love. He would accompany his tiny signature ecstatic lines to show the kinetic movement of the figures which can be perceived as the figures dancing. Ask your tattoo artist to make two or more figures holding up a heart like this and what a great way to show off your admiration for Keith Haring with his iconic heart motif.

One of the most famous artworks was ‘Radiant Baby’. Haring was an admirer of the pure and free-spirited soul of a baby. This art signifies innocence, goodness, purity, and potential, and the lines emanating from his body signifies the spiritual light glowing from within. This art was a symbol for how a human is so pure, free, happy, and uncomplicated during the early stages of his life that one loses by the time they grow up, which we cannot agree more. It is rightfully said that no matter how much we grow up, we should try to never lose the child in us. Get in touch with the time you were truly happy and free with a Radiant Baby tattoo like this.

Apart from the themes mentioned above, Keith Haring’s artworks also included spirituality. These motifs were a reflection of his views on the existence of heaven and hell and were more than often anti-religious. You can add the Demon figure along with this tattoo or leave it on its own like the one below.

Haring’s trademark, The ‘Barking Dog’ is a symbol of oppression and aggression and signified the abuses of power in everyday life by the Government that demand obedience. You can get this tattoo with the dog’s outline but can also add the signature tiny lines to signify the barking of the dog.

‘We The Youth’ mural painting was a public collaborative work by Kieth Haring that showcased the life and energy of the youth. These icons series consisted of groups of colorful people dancing together signifying the energy of youth. Bring the mural onto your body and let your youth shine throughout your life.

This finger crossed doesn’t have any strict symbolism associated with it but we don’t always need an explanation for iconic paintings now, do we? Get a Keith Haring finger tattoo according to your perception and deliver a personal message with this icon.

Keith Harring’s art piece consisting of figures with a hole in the stomach was originally inspired by the assassination of John Lenon but this icon can further be perceived as the emptiness residing within humans. A tattoo with a bitter truth related to life is a great option for your next meaningful pop art tattoo.

Keith Haring has featured the Cross symbol in figures in most of his art. One of the most common was the two figures placed horizontally and vertically forming a cross. Get a Cross tattoo like this one if you relate to haring’s anti-religious views.

Keith haring died of AIDS and before his death, he was a huge supporter of AIDS awareness organizations like ACT UP (AIDS Coalition to Unleash Power) and created artworks for the same. You too can show your support for a noble cause and get a Keith Haring tattoo like this.

Keith Haring along with his other iconic artworks was also known for figures with technological motifs. What inspired him for these series was the concern about the effect of technology on humans. Today, his concern became a reality where people have started living their lives on their phones and laptops. Go ink a tattoo like this if you believe technology has indeed impacted us in a major way.

Keith Haring has lived a life of honor and lived it to its fullest. He died in 1990 and even after all these years, his artworks continue to inspire art folks. We are sure you’ve found your next tattoo inspiration from the list above, however, if you want to look out for more inspirations, you can also check out our suggestions: