101 Best Katana Tattoo Ideas You Have To See To Believe! 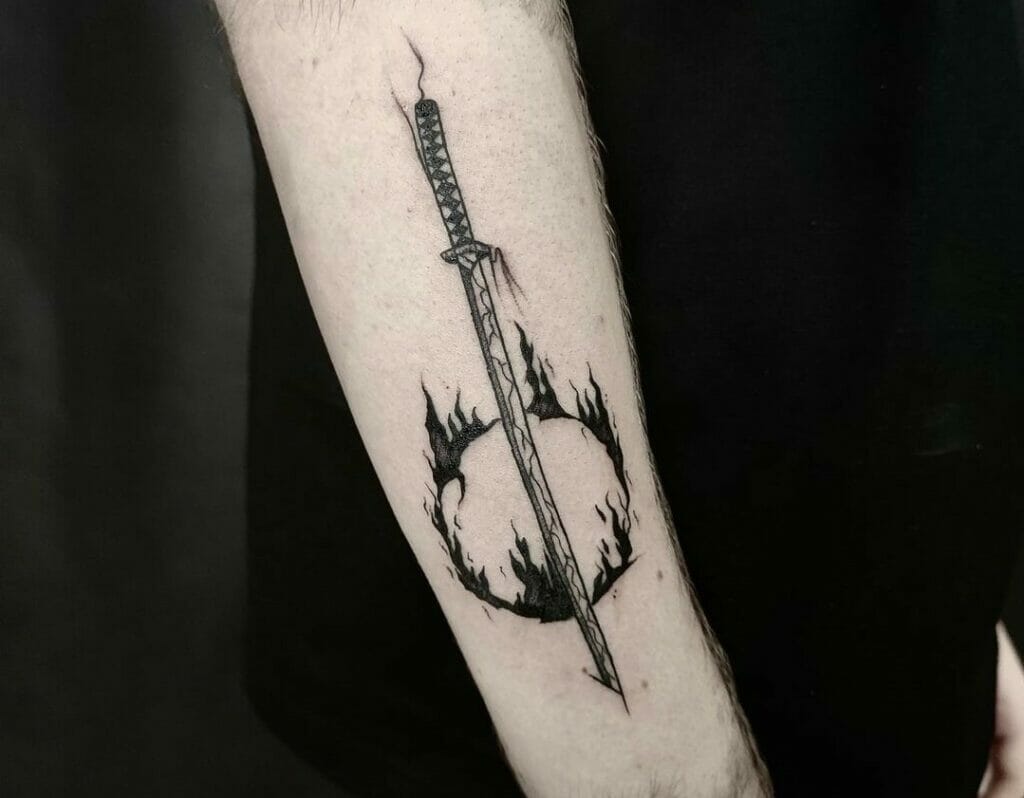 Looking for a tattoo that symbolises power, authority as well as strength? Then here are some amazing Katana tattoo ideas for you to check out!

A katana is a special type of sword that was used by Samurai warriors in Japan in the 13th century.

Samurais were ancient Japanese noblemen who were also leaders of the military. They adopted the katana sword as their chief weapon as it was more refined than other ordinary swords but were also capable of inflicting quite a lot of harm on the enemy.

The katana has become associated with Japanese samurai and is considered to be an important part of any Samurai tattoo as well. The katana tattoo meaning can vary but mostly represents strength, bravery, protection, authority and power. With the help of the katana, the samurai struck down his enemies and protected his land.

If you are from Japan or are very interested in Japanese history or works of art such as books, anime or manga, you can definitely get a Japanese katana tattoo as your first tattoo. While there can be complex katana tattoos that are quite large, you can give your tattoo artist the task to create a tattoo that will be simple and minimal but just as intricate.

One of the most popular trends of 2021 is to get colourful tattoos. After all, everybody likes a bit of colour in their lives and in their tattoos as well rather than a tattoo with just black ink. If you want to get a colourful katana tattoo, you have to find an artist who is an expert at tattooing with colourful ink. Consequently, you can fill in your tattoo art with bright, vivid colours or soft, pastel shades according to your preferences.

Complex Katana Tattoos For Your Arm

Just like the American traditional tattoo sleeve that many men love, you can also fill up your arm with a great sword or katana tattoo. As seen in the picture, the katana tattoo is covering the full lower arm of the wearer and looks quite amazing even from a distance. The tattoo artist has done exceptional work with black ink as the sword tattoo is quite detailed and nuanced.

Stunning Katana Tattoo Designs Along With Other Japanese Symbols

If you are confused about how to modify katana sword tattoo designs with the cherry blossom tree or leaves, you can derive some inspiration from the pictures above. Both the katana tattoos look even more beautiful due to the addition of the colourful cherry blossoms.

If you are looking for more awesome Japanese tattoos, check out these Asian dragon tattoos!

If you are a big fan of one of the best Japanese mangas named ‘Demon Slayer: Kimetsu no Yaiba’, then you will know the importance of katanas in the series. The protagonist Tanjiro sets out to become a demon slayer after his family was killed by them. Therefore, if you want a tattoo inspired by the manga or the adapted anime, you can also ask your tattoo artist to make a katana tattoo based on the show.

While a lot of men get the traditional katana tattoo design on their arm or leg, you can also play around with the design to create a unique tattoo just for you. As seen in the picture, the wearer has made a clever illusion with the tattoo to show as if they have sheathed the tattoo with cloth bands. It also shows that the wearer is ready to take out the katana any time they want.

Amazing Designs For Katana Tattoo With The Enso Symbol

The enso symbol is a very important part of the Zen Buddhist tradition. It is an incomplete circle that shows the value of imperfection in life. In addition to that, it is also a part of meditative processes whereby people try to do it one single stroke rather. Consequently, you can also add the enso to your katana tattoo to elevate its beauty and distinctiveness.

If you are looking for more enso tattoos to add to your body, check out these amazing enso tattoo ideas!

The iconic image of the great Japanese samurai has always been associated with the katana or sword in their hand. These men were part of the nobility and had their own land to rule. In addition to that, these men were also leaders of the military. Consequently, if you want a detailed katana tattoo, you can also add a samurai to the design. As seen in the picture, you can also turn the samurai into a powerful woman warrior.

Ideas For A Katana Tattoo On Your Leg

Not many tattoo designs can easily fit into our legs or look that great from afar. However, if you are thinking of getting a leg tattoo, you may definitely want to derive some inspiration from the picture. Here, the katana tattoo looks amazing running down the side of the wearer’s thigh. The addition of butterflies in black ink along the katana is elevating the beauty of the tattoo.

Gorgeous Ideas For A Katana Tattoo On Your Spine

If you are truly open to experimenting and risks when it comes to tattooing designs on your body, you can then try to set a katana tattoo on your back right along the spine. While most people get large, elaborate back tattoos, your spine tattoo will stand out in a crowd because of its minimal style and sheer elegance.

So if you also want a really cool tattoo that refers to the history of Japan along with being a symbol of protection and courage, go ahead and find an amazing katana tattoo for yourself!

What is the meaning of a katana tattoo?

A katana tattoo is a Japanese style tattoo that is often associated with Samurai warriors. The design typically features a curved, single-edged sword that symbolizes strength, honor, and courage. It can also be seen as an expression of loyalty and protection. Additionally, it can represent the struggle between good and evil or serve as a reminder to stay focused on a spiritual path. In some cases, the design is also used to honor ancestors or pay tribute to Japanese culture. Ultimately, the meaning behind a katana tattoo is up to the individual and can be customized in a variety of ways.

How much does a katana tattoo cost?

The cost of a katana tattoo will vary depending on the size, complexity, and design of the artwork. Generally speaking, the average cost for a basic katana tattoo is around $150. However, larger designs with intricate details can cost up to $500 or more. It’s always best to get quotes from multiple artists before making a decision. Additionally, many tattoo shops offer discounts or loyalty programs which can help lower the overall cost of your katana tattoo.  ​

How big does a katana tattoo have to be?

The size of a katana tattoo will depend on where it’s placed and the individual’s desires. Some people prefer to have small, discreet designs while others opt for larger, more intricate pieces. Generally speaking, most tattoos featuring a katana can range from 2 inches in length to 12 inches or more. It is also important to consider the size of your body and how the design will look in proportion. An experienced tattoo artist can help you find a size that works best for you.