10 Best Kali Tattoo Ideas You Have To See To Believe! 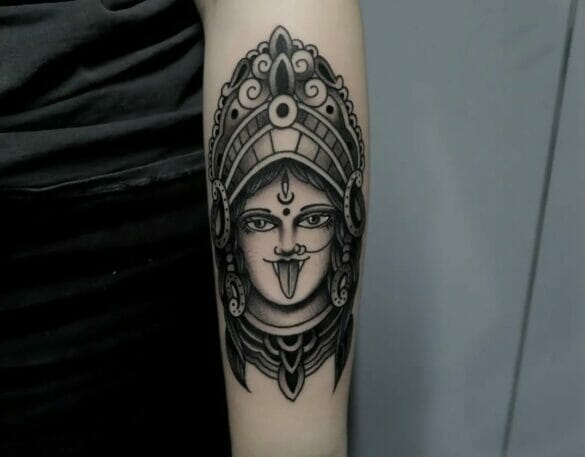 Looking for a tattoo that will reveal your inner fierce goddess? Then here are some amazing Hindu goddess Kali tattoos you should check out!

Kali is a well known Hindu goddess who is the most powerful form of Shakti, a form of cosmic energy in Hinduism.

According to Hindu mythology, goddess Kali is a destroyer of evil forces and is known for her power and thirst for violence. Kali is worshipped throughout India, Nepal as well as Sri Lanka in different forms and is also worshipped by Buddhists and Tantric practitioners.

The image of Kali is quite iconic and popular throughout the world as she looks quite different from other Hindu goddesses. Not only is she black or blue in colour, she is also seen dancing around with her tongue hanging out on top of her consort, the god Shiva. Kali can often be seen holding a trident (trishula) in her hand along with a sword and a depacacitated head of an enemy demon.

There are plenty of awesome Kali tattoo designs on the internet if you are interested in getting a tattoo of the goddess of death. As seen in the picture, you can go for a simple monochromatic Kali tattoo with clean, neat and precise strokes.

The image of Kali is quite fear inducing and awe-inspiring. As opposed to other Hindu goddesses like Parvati and Lakshmi, Kali is a fierce fighter and brutal warrior. In popular stories, she is known to be dancing around dead bodies on the cremation ground with ash on her face and a garland of skulls. If you want to reflect this fearsome side of her accurately through your tattoo, you have to look for an amazing tattoo artist who is an expert at making fierce Kali tattoos.

If you are looking for more ideas on how to further modify your Kali tattoo, here are some amazing skull tattoos you should check out!

Ideas For Kali Tattoo Sleeve For Your Arm

A lot of people prefer to get tattoo sleeves on their entire arm by covering it up with tattoos. For a tattoo sleeve, they either cover their arm with smaller, disjointed tattoos that are connected with each other or one single large tattoo based on one theme.

As seen in the picture, you can get a full sleeve Kali tattoo with the face of Kali tattooed on your skin. Tattoo sleeves are also very visible and can be seen from afar. Consequently, you can go through some fierce Kali tattoos and choose the one you like the most for your arm.

Elaborate Kali Tattoo Designs For Your Back

The image of this mother goddess may be fierce and terrible with bright red blood dripping from her hands, but she is still a beautiful goddess according to her followers. Kali may symbolise death and destruction but she only participates in the destruction of evil forces. Otherwise, she is known for being a kind deity who loves her devotees like she is their mother. Along with her consort Shiva, Kali is one of the chief deities of the universe. Consequently, if you want to feel closer to her and worship her in your own way, you can get an elaborate tattoo with Kali’s face and entire body on your back.

The image of Kali is quite visceral and vivid with Kali’s black or blue coloured complexion, shining trident and blood-stained weapons in her arms. She also wears colourful garlands made of flowers given by her devotees. Consequently, you can also ask your tattoo artist to add these bright colours to your tattoo in order to make it more realistic and stunning.

Kali might be one of the many gods in the universe according to Hinduism but she is definitely one of the most important. The image of Kali with her tongue always sticking out while she kills demons is supposed to represent her action of protecting us from evil. If you have read a lot about Hindu mythology, you might want to show her dark and fierce side through your tattoo. In that case, you can draw your inspiration from the picture above and add heavy shading to the Kali tattoo.

Some people prefer to put tattoos on their chest if they feel the design they have in mind needs a lot of space to be properly displayed. Consequently, if you want to show your kali ma tattoo art with her third eye in full glory, you can get the Kali goddess tattoo on your chest as well.

As seen in the pictures above, you can ask your tattoo artist to draw up an elaborate Kali tattoo with snakes or even her entire body with the weapons. You can also stretch the design down to your stomach if you think it needs more space.

Here are some more amazing chest tattoo ideas if you are looking to get inspired!

Kali Tattoo Designs For Your Hand

If you do not want a really big Kali tattoo, you can also get another on your hand in a relatively smaller size. If you approach an expert tattoo artist, they will create an awesome Kali tattoo design that will easily fit on your hand and look great as well.

If you are looking for a Hindu tattoo, then you might want to look for a goddess tattoo by choosing one among many in the Hindu pantheon. If the images of Kali with her red blood-stained trident stands out the most to you, you can definitely get a Kali tattoo. This tattoo on your arm will be quite visible and you will definitely get a lot of questions like “What is goddess Kali tattoo?” once they see it. Thus, if you are in the search for hindu tattoos, this will be a great option.

In India and Nepal, people make clay statues of different gods and worship them during different festivals. Most of the classic Kali tattoos are based on those statues which have human-like features. However, if you are a little more creative with your tattoos and want a unique and artistic tattoo design, you can also derive some inspiration from the picture above.

Rather than getting a basic tattoo of Kali, the wearer has gotten a slightly different Kali tattoo which shows their own interpretation of Kali. Thus, an artistic and unconventional Kali tattoo will definitely stand out in a crowd.

The goddess Kali is known through out the world for her fierce image and how she bravely charges upon her enemies and does not shy away from violence. Her association with darkness and death also makes her one of the most feared deities. Therefore, if you want to show your devotion or love for the goddess, go ahead and find an amazing Kali tattoo for yourself!