10 Best Jurassic Park Tattoo Ideas You Have To See To Believe! 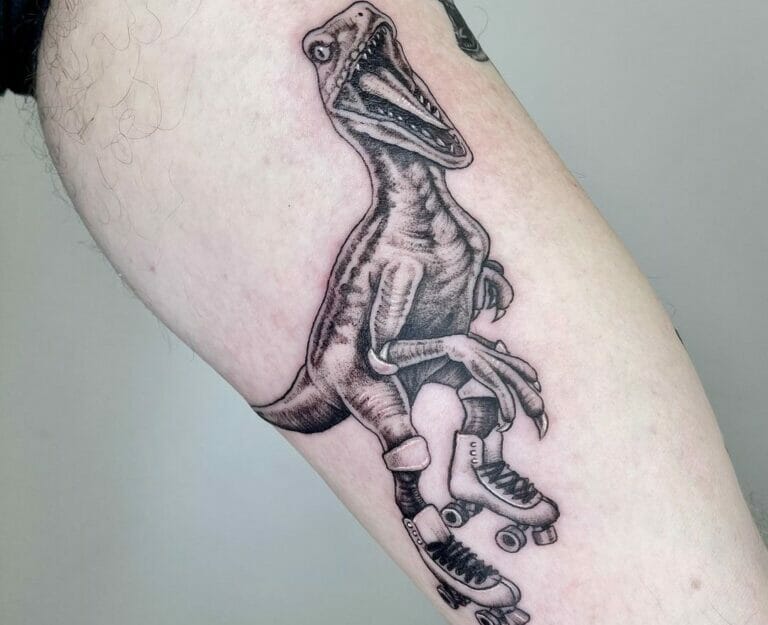 Want some ideas for cool Jurassic Park tattoos? Look no further! We have curated an awesome collection of Jurassic Park Tattoo designs for everyone.

Jurassic Park is an evergreen series of films that have brought creatures such as the Tyrannosaurus rex or the velociraptors into the limelight.

Movies from this franchise are one of the few movies that absolutely stays in your mind, regardless of the fact that you are a kid or an adult. The series has made a significant impact on the general perception of dinosaurs and the Jurassic era that has made creatures such as the Tyrannosaurus rex infamous.

A T-rex tattoo is probably one of the coolest Jurassic Park tattoo one can sport. The creature symbolises sheer power and represents an extremely dominant personality as well. The Tyrannosaurus rex has been one of the most ferocious creatures to walk on this planet and getting a tattoo of an aggressive Tyrannosaurus rex is a great way of projecting the power and determination your spirit harnesses.

Even though Tyrannosaurus rex is the most popular Jurassic Park tattoo idea out there, raptor Jurassic Park tattoos definitely come second. The first tattoo is a great example of mixing it up with flowers, an unfilled raptor art and finally a fully coloured raptor. The second tattoo is also another great example of mixing things up with the classic mosquito trapped in amber along with a full-sized raptor and the unforgettable, ‘Clever Girl’ written below the artwork.

The first tattoo is a great way to represent how the DNA of creatures from the Jurassic era exists inside the mosquito trapped in the piece of amber. Without this extremely important find, the necessary research could not be done by the scientists in the movies and there would be no Tyrannosaurus rex, nor would be there any of the other behemoths. The others tattoos are also great examples of inking oneself with artwork of the memorable mosquito trapped in amber.

These are examples of a classic Jurassic park tattoo that can be sported anywhere on your body. These will look especially great on your arms or legs. In the first tattoo, the dinosaur has something like a wicked smile on its face, this makes the tattoo even more interesting to look at. The second design showcases an aggressive raptor that will definitely impress tattoo lovers!

This tattoo is a beautiful piece of art that would look great on your thighs. The tattoo is truly well made and is great for a quick Jurassic Park tattoo flash for your friends or to display the raptor at the swimming pool. The jewellery and the blueberries make the tattoo even more uncommon and amazing to look at, definitely leading to a lot of questions from onlookers.

These are two great examples of an aggressive Jurassic Park tattoo where it seems like the dinosaurs are coming at you. This is a great way to showcase the ferociousness of these reptiles as well. There is a 3D element to these tattoos that make it look even better.

These two tattoos are extremely aesthetic and visually pleasing to look at, especially due to the great combination of colours or flora blooming on the skeletons of these creatures. These tattoos are also great for a Jurassic Park tattoo sleeve.

A Jurassic Park tattoo with the logo can be recognised globally. In the first tattoo, with the logo, scenes from the movie are also showcased alongside the hungry Tyrannosaurus rex. You can also choose to get motivated by these kinds of Jurassic Park tattoo designs for men or women and design your own tattoo with your favourite scene. The second tattoo is just the logo and design that has been used throughout the movies and is extremely popular anywhere in the world.

The first tattoo is also a great example of a popular scene from the first movie as well, alongside the logo. The second tattoo is also a great idea for a traditional Jurassic Park tattoo that can be inked on your legs or even arms. You can definitely choose the dinosaur of your liking or the scene that is the most memorable for you and then proceed with inking yourself with tattoos such as these.

If you like dinosaur tattoos or tattoos from this movie, you can also definitely check out some Jurassic Park Jeep Tattoo designs. Also, when children find interest in our reptilian ancestors, it is absolutely understandable that they would want a cool dino tattoo when they grow up a bit!