10 Best Joker Sleeve Tattoo Ideas That Will Blow Your Mind! 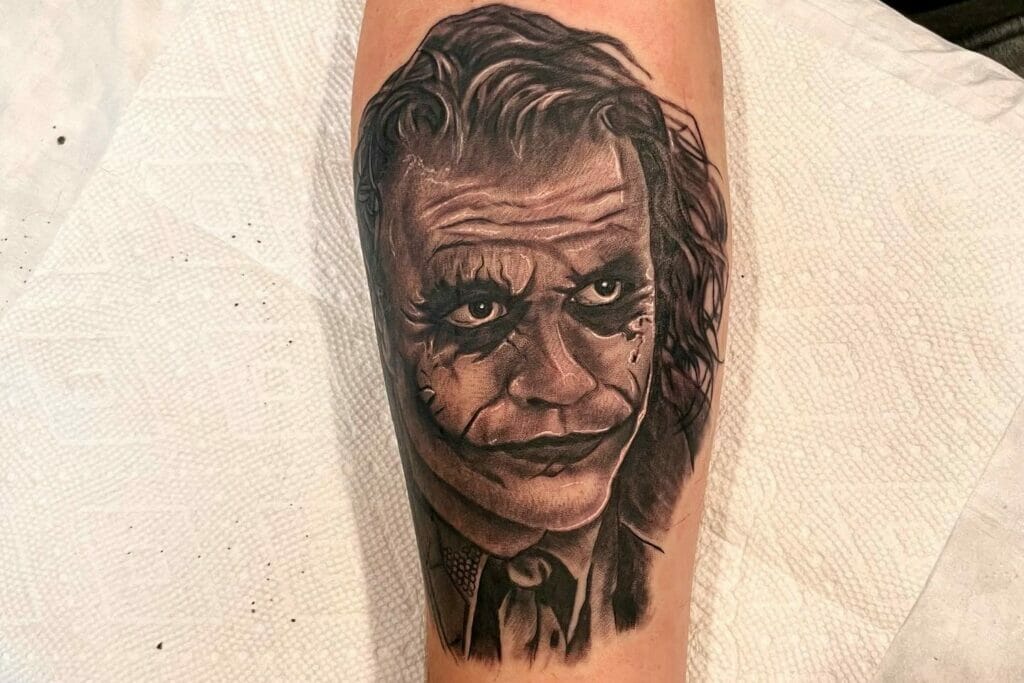 Are you rebellious and also a fan of DC Comics? Then you might get yourself inked with a joker sleeve tattoo. Check out the article to take your pick.

The Joker, amongst the most recognizable villains in comic books, has appeared in several extraordinarily startling and thought-provoking pieces.

Individuals who agree with the Joker’s main traits frequently get tattoos on his painted face. He has a playful, naughty side as well as a dark, evil side.

A well-known DC Comics character, many people immediately think of Heath Ledger, who portrayed the quintessential Joker, although Mark Hamill’s interpretation from the animated DC universe is perhaps the most well-known illustration.

Think about getting a Joker tattoo if you want to display your confidence in being unique in some way and you think you need a tattoo to do so. It would be too naive to claim that he embodies our collective wicked intent. It stands for perseverance as well as the darkest side of existence. The Joker is a symbol of an uncontrollable, revolutionary streak.

The tattoo form of the Joker, which has various connotations, is similar to the Joker card tattoo in that it doesn’t correspond to any color. Although the prevalence of the tattoos seems to fluctuate with that of the Batman image, there are always individuals that identify with the Joker.

The Joker appears in several movies, each having a somewhat different take on how he behaves and seems. The Suicide Squad persona would make for a remarkable rendition. You can either get Jared Leto’s Joker inked to make your ink all related to what the figure stands for, or you might like to add the tattoos and markings that Joker had in this movie.

This tattoo might represent insanity, tenacity, or darkness. If you decide to use a picture of Harley Quinn, it might convey your unwavering devotion, passion, and love. This tattoo, in black and grey, appears incredibly lifelike.

Many artists have played the Joker over the decades, but Heath Ledger’s portrayal of the character in ‘The Dark Knight’ is the most well-known. In his 2008 portrayal, the artist was a believable Joker thanks to his sinister smile and manic laughter. That was his penultimate role, proving it much more noteworthy given that he tragically died six months later, even before the movie’s premiere. With green hair and pale face, the feature of this character makes for a spectacular art piece. The character’s makeup was very excellent, and while your tattoo could be executed in black ink, this would look much better in color to show the exact intricacies.

Select a location that will accommodate this piece’s size and depth of detail. For the greatest effects, it could also be advisable to select a tattoo artist who specializes in portraiture.

There are female versions of devils or jokers. Therefore, the Joker need not be the masculine DC Comics figure. The payasa, a famous representation found in Chicano art, is among the most well-known depictions. The artwork usually depicts a woman wearing white face paint, which is accurate and intricate.

Various topics, such as catastrophe and misfortune, can be symbolized by the female Joker. It may also depict the blending of elegance and suffering. Think about the meaning of this item for you and the Chicano culture before actually getting it tattooed.

Another feature that many associates with the Joker is his laugh. He has a psychotic smile permanently inked on his arm sleeve that he can raise to his mouth and conceal his real lips. The Joker’s manic smile is one of the most iconic things about the character. There are numerous ways to perceive this smirk; for some, it stands for masking sadness and pain. Others equate it with insanity or our capacity for wicked deeds.

The smiley can be placed on any part of the sleeve and does not need to be inked on your sleeve. Having said that, picking a conspicuous location is a wise choice since you will view it frequently and be reminded of the reason you got the inked.

Due to their conflicting characteristics, Batman and Joker are different individuals that are frequently depicted side by side. The first is virtuous, and the other is terrible; one is a hero, and the second is an antagonist. Despite the complexity and flaws of both personalities, these illustrations grossly oversimplify the point. Even though he’s an evil character, the Joker appeals to a lot of individuals because of certain of his traits.

Although his strength is directed toward anything evil, this may encompass the suffering and challenges he has had in his career as well as his tenacity and steadfastness. It can be helpful to display a picture of the Joker next to Batman to emphasize the value of balance.

Harley Quinn is a fictional supervillain and an antiheroine in DC Comics. She is the companion and partner of the Joker. Eventually, in the comics, she had her first appearance in ‘Batman: The Animated Movie’. She is among the finest female characters in comic book histories, if not the top one, and she is a fantastic choice for a tattoo. There are numerous methods to get a Harley Quinn tattoo, from whole sleeves to little sections. The legs, thigh, and arm sleeves have always been the nicest locations to get a Harley Quinn ink. They can also be applied to your chest or back!

Although the typical colors for Harley Quinn tattoos were black and red, you can also have them in various hues like magenta, yellow, and blues. You might get ideas from this pattern when attempting to create your tattoo.

Since the Joker has a spooky grin that makes him terrifying, it is not difficult to discover images of the Joker looking wicked. The Joker can be a remarkable image because he is a villain and is connected to evil, dark, and deceit. Your art can express your sentiments and serve as a reminder to remain on the straight path and avoid turning into the Joker. It can also just be a quick way to pay tribute to your favorite villainous character. There are numerous ways to construct your piece, whatever way you decide to perceive it.

You may choose a more generic joker illustration as an alternative to the comic-book character. This could be an evil clown or Joker, and it might be a means for you to let everyone know that you’re not somebody to cross paths with.

The Joker’s face is characterized by his peculiar cosmetic choices and deformities, which gave him his terrifying look. If you’re looking for things unique and significant, receiving a tattoo of the Joker is a great idea. It frequently symbolizes the negative side, but it may also make a statement about how there must be harmony for darkness and light to cohabit. His perseverance and passion might be seen as his desire to achieve victory in defeating Batman.

For a tattoo that you want to view each day, the forearm is a fantastic location. It is a dynamic location that lends effectively to medium- or small-scale patterns and is easily concealed by apparel. One might choose to get tattooed with a tattoo like this for a variety of purposes; they may range from highly personalized to as basic as a love of the characters and the Batman and Joker plot. It’s a perfect location to get your first ink because of this.

The Joker has a wicked smile. Although he is frequently linked to wickedness, darkness, or even death, there are a few distinctive aspects of him that captivate folks. This incorporates his scary, crooked grin, which perfectly captures how insane he is. He engages in wicked deeds and giggles about them, showing no sign of sorrow or regret.

As people realize whatever this tattoo symbolizes to you, this chuckle provides for an intriguing tattoo that is sure to generate debate. Choose an area on the body where the tattoo may be easily covered up with clothing and flaunted on your terms if you believe it to be private and intimate.

In the 2019 movie ‘Joker’, the Joker was given one of his more current incarnations. Fans were given an insight into the events that lead to the Joker now being the wicked villain he is due mainly to Joaquin Phoenix’s portrayal of the role. In this movie, if you ever wanted to feel sorrow and sympathy for this insane person, you could.

The Joker can serve as a metaphor for how devils might be created when people are not nice and considerate. This tattoo might stand for anarchy, irresponsibility, or remorse. Tattoo design honoring this persona is appealing for a variety of reasons, making it a significant design that is sure to spark debate.

The Joker stands for a variety of things, including evil, gloom, deceit, and disobedience. Some of the traits that the Joker possesses are also relevant to some individuals. Thus, your chosen design might be interpreted more positively.

Below there are many popular joker tattoo designs, depending on your preference.