101 Best Joker Hand Tattoo Ideas You Have To See To Believe! 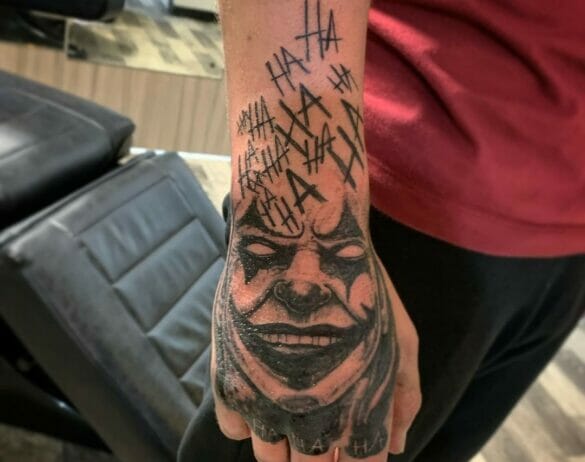 Looking for a tattoo that will hide your insecurities and reveal your maniac side? Then here are some amazing Joker Hand tattoos for you to check out!

The Joker hand tattoo became popular after the release of the movie ‘Suicide Squad’ in 2016 as a part of the DC Entertainment Universe.

The movie ‘Suicide Squad’ dealt with a group of famous DC villains who were brought together by agent Amanda Waller to deal with the Enchantress. One of the main attractions of the movie was the DC supervillain Joker who was played by actor Jared Leto.

The character of the villain Joker has always fascinated comic book readers and movie audiences. After Jack Nicholson’s fun portrayal, people were astounded by the dark performance by Heath Ledger. In fact, Heath Ledger also won an Oscar for his portrayal. Therefore, a lot of people were excited to see how talented, award-winning actor Jared Leto would approach and play the role. While the reactions to his portrayal were mixed, the new look of the Joker stood out for everyone. Jared Leto’s Joker had a lot of tattoos, each of which signified something deep and personal about his life. Among all those tattoos, his Joker hand tattoo stood out the most and inspired a lot of people.

In the movie ‘Suicide Squad’, Jared Leto’s Joker has three smile tattoos. The biggest smile tattoo is on his stomach and the other two smaller ones are on his right forearm and on his left hand near his fingers. In one scene, he uses the left-hand tattoo to hide his face when he smiles. A lot of fans think that he uses that tattoo to hide his insecurity because he lost all his teeth due to Batman beating him up badly. Therefore, you can also get such a Joker grin tattoo on your left hand to pose as Joker does in the movie.

If you are a true Joker fan, you will know how his sinister laugh can terrorise the citizens of Gotham city. If you want to pay homage to the iconic character, you can get the tattoo with Joker’s face and add the words ‘Ha Ha Ha’ to them to represent his laugh. Even in the movie ‘Suicide Squad’, one of Jared Leto’s Joker tattoos included these words on his chest.

If you do not want a simple Joker tattoo, you can also ask your tattoo artist to create a complex Joker tattoo with bold colours on your hand. As seen in this picture, the wearer has used Heath Ledger’s face for their Joker tattoo and it looks amazing.

If you are on the search for a few ideas about how to enhance your Joker tattoo, look at these awesome finger tattoo designs!

Joaquin Phoenix’s portrayal of the Joker was universally applauded because he managed to bring out the darker side of the character. It also showed his evolution before he turned into a supervillain who would become the chief enemy of Batman. If you want to pay a tribute to this villain, you can ask your tattoo artist to make a graphic tattoo for Phoenix’s Joker as well.

Fun And Crazy Joker Tattoo Designs For Your Hand

A lot of people often cosplay as the Joker for Comic Con or even for Halloween. They may dress up in the classic clown costume for Halloween or get a Joker temporary tattoo just for Halloween. For Halloween, you can get a Joker smile hand tattoo which is vividly colourful with bright yellow and green colours.

As seen in the picture, the tattoo artist has drawn a Jared Leto Joker hand tattoo with a lot of colours making it more striking and eye-catching. You can also ask your girlfriend to dress up as Harley Quinn as both of you can then together be creative with your costumes.

The entire world was looking forward to the movie ‘Suicide Squad’ because of the unique idea of turning villains into heroes. Many of Batman’s villains including the Joker, Harley Quinn and Deadshot were also in the movie. However, fans did not like the style in which the Joker was portrayed as they felt it was a caricature and not a true portrait of his grey personality.

However, if you liked how Leto portrayed Joker, you can take inspiration from the film for a Joker hand tattoo idea. If you draw a mouth on the hand as Joker did in the movie on his chest and hand, your tattoo will definitely stand out in a crowd.

The character of Joker is undoubtedly dark. If you want your Joker tattoos to reflect that darkness as well, you can ask your tattoo artist to draw a monochromatic black-coloured Joker tattoo on hand. As seen in the picture, the Joker hand tattoo looks very real and evil.

If you are a fan of Leto’s portrayal, you can get the Joker smile tattoo on hand if you are looking for hand tattoos for men. You can also get your Joker tattoo hand based on the popular animated movie ‘The Killing Joke’ which includes many of our beloved characters including Batman.

If you want to see some awesome tattoo ideas from another popular comic book franchise, check out these amazing Marvel tattoo ideas.

If you want to modify your Joker tattoo on the hand, you can also add your own specific touches and unique interpretation to the tattoo. As seen here, the wearer has turned the smile tattoo into a skull smiling with black ink. This has made the skeleton hand tattoo illusion look even more sinister and edgy.

The Joker’s smile has become an iconic image in popular culture. Whether it was Heath Ledger’s stitched smile or Joaquin Phoenix’s smile with makeup, the Joker smile tattoo has always been popular for those who want Joker tattoos. If you want such a tattoo, you can also slightly modify the tattoo and get the Joker smile tattoo on your hand as Jared Leto did in ‘Suicide Squad’.

The character arc of Joker has made him as popular as his archenemy Batman. The stories of the two trying to defeat each other has fascinated people over time. However, if you think the Joker has more depth than the Batman and that his actions made sense to some extent, you can definitely get a Joker tattoo. Consequently, if you are looking for unconventional and unique Joker tattoo designs, go ahead and get a Joker hand tattoo!

What does the joker hand tattoo mean?

The joker hand tattoo is a symbol of chaos and anarchy. It represents the belief that there is no order or structure in the universe, and that everything is ultimately random. This tattoo can also represent a rebellious or anti-authoritarian streak, as the joker is often seen as a figure who challenges authority.

How much does a joker hand tattoo cost?

The cost of a joker hand tattoo will vary depending on the size, complexity, and location of the tattoo. Smaller, simpler tattoos may start at around $50, while larger and more complex designs can cost hundreds or even thousands of dollars.

What color should a joker hand tattoo be?

There is no right or wrong answer when it comes to the color of a joker hand tattoo. Some people prefer to keep their tattoos black and white, while others opt for colorful designs. Ultimately, it is up to the individual to decide what colors best represent their personal beliefs and values.

What part of the body is the joker hand tattoo traditionally placed?

The joker hand tattoo is typically placed on the back of the hand, between the thumb and forefinger. This location is often chosen because it is a highly visible spot, making it ideal for those who want to make a statement with their body art.