10 Best Joker Card Tattoo Ideas You Have to See to Believe! 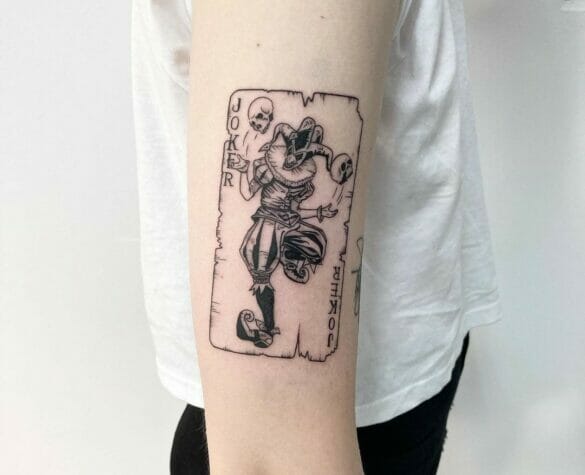 In playing card games, the Joker is a wild card that can either be completely omitted or used as a wild card.

Playing card tattoos have been a part of the world of tattoos and come in variations that make use of all the characters present in the pack of playing cards. The Joker card tattoo has become an interesting tattoo design over the years and many a design have been inspired which come with an immense decorative value.

This wild card in the card deck can make or break a card game as it can be extremely beneficial or extremely harmful, depending on the game you play. Since the joker is a wild card in gambling games like poker, it is allowed to represent other existing cards like the jack, diamond, or a card hand like the four aces. In card games where joker cards are of value, they tend to change the direction of the game as they can turn a deck of winning hand into a deck losing hand.

The joker character is often used as a symbol of deceptiveness and trickery and many characters in popular entertainment have been inspired by the joker or jester card. The movie character Joker from DC comics’ Batman series is a great example of how the joker card can represent sinister behaviour.

The joker card tattoo meaning is as you prefer as you can add any number of elements and take inspiration from personal experiences to create your idea of a playful or sinister-looking artwork that has your version of inspiring adornments.

With all that said, here’s to hoping that you can find your preference on this list!

The joker or jester is known for its trickery and deceptiveness and can be a great tattoo design if it is done as intended.

Joker card tattoos like this design make the perfect use of these aforementioned qualities of the characters and their symbols that can either be playful or serious in tone. The happy face in this joker card is used to give this tattoo design life of its own as it adds a notorious look to it with the smile.

Joker card tattoo designs like this idea can be a great addition to your skin if you are a person who has some sort of trickery up your sleeves!

If you are not sold on the base design, you can easily add any number of symbols to the art or include elements from your life that have inspired you in a way. You can also ask your tattoo artist to add a frame to the portrait or add a colour like green, blue, or yellow if you prefer something colourful rather than the usual black and grey design.

If you are one of the many people who are diehard casino fans, then this tattoo will resonate with you due to its theme.

The design is simple as it creates a hand of cards with only the joker symbol visible and if you are a person who pays attention to little things, then you will surely understand the meaning behind it as the clown character is clearly visible and nothing else is.

Tattoo designs like this can be used as a means to show off your deceptiveness as reveal one aspect of your life while hiding others as you leave your friends and family guessing about what you will do next!

This design will suit both men and women and can be inked on either the arm or the shoulder, whichever site you prefer. You can also change this body art a bit by taking inspiration from joker card images or add dice or other risk-taking elements that have their own meaning to you!

Tattoo designs like this take imagination to a whole new level and show off how art can is flexible and can be made to take on any form that a person would want from his or her tattoo.

If you are looking for an answer to how important the joker card can be, especially in a game of poker, then this cool joker card tattoo will give you an idea.

The clown with a smile can be of great importance as it can make or break a contest with its unpredictability and when used properly can even be a king or queen slayer thanks to lady luck as seen on this tattoo design!

This tattoo shows how men and women can work hard to overcome adversities and build up character for new beginnings with a smile. The ink work on this tattoo is great as it is, but if you want to add more ink or get make the design colourless, then you can easily get it done.

The joker cards are in some cases, are used as symbols to represent evil due to the character’s evil-looking design and concept.

Tattoo designs like this are will certainly suit you if you are a person who has a tricky character that is hard to read. The concept of the tattoo is to show that things are not what they seem as the portrait of the top uses the joker in a funky way, but the reflection shows what the real deal is as the joker is represented with a skull portrait.

This is an example of a classic joker card tattoo that plays perfectly to the unpredictability of the joker. However, if you are not satisfied with this design and want something less sinister, you can always add elements like dice or other cards like the jack or the queen to make the design suit your preference.

Implementations like this design are great if you want a tattoo that is light-hearted and takes a different approach from the usual joker tattoos that base themselves on the trickery of the character.

This tattoo design is a simple idea that makes use of the joker card through the usage of a single ink design. The frame is perfectly drawn as it incorporates the joker in it as it sits on a half-moon with a binocular and watches on the world with delight.

If you are a person who likes to observe without taking any harsh actions, then this tattoo will suit your personality. Joker tattoos like this design due to their small size, are ideal for the arm or the shoulder.

In the world of DC, the Joker plays an important role as the nemesis of Batman and tries to continuously outdo the Dark Knight with his evil scheming and unrelentless efforts to kill Batman.

This tattoo takes a scene out of the Dark Knight movie and turns it into an amazing tattoo that captures the essence of the evil villain as he shows off the joker card which is also his calling card. Prior to the movie, the character has been a menace for decades in the nose of Batman, but it is in the Dark Knight movie that the character by best portrayed by the late Heath Ledger.

If you are a fan of Heath Ledger and want to pay tribute to him, then this tattoo will be perfectly suited to you.

In a deck of tarot cards, only the fool or the jester has a number assigned to it. According to the study of tarots, the fool represents the beginning of a journey that is spiritual in nature. The fool is used to convey people to follow their dreams by taking a leap of faith. It can also portray your unlimited potential as it provides you with the confidence you need to achieve greatness in life.

The joker in this tattoo design is visually stunning to look at owing to the amazing artwork that comes with the design as the jester gives off a bright aura of calmness and relaxation and a little bit of mystical vibe that will definitely calm you down!

In most tattoo ideas, the skull is used to portray the feeling of laughing in the face of danger. This idea, when combined with the joker card can create a tattoo that takes on a mocking attitude to grim things. Joker tattoos like this design are great for people who like to go against the tide and question life models set by society.

The funky nature of the tattoo gives it a cool vibe as the skull-faced joker juggles around a bunch of skulls which shows the carefree and tricky nature of the personality. This tattoo design is great for people who want to wear their heart of their sleeve and show off how they question precedents set by society and how going against them can sometimes be a good thing to do. This tattoo design thanks to its small size, can be perfect for the arms, legs, shoulders, back, or thighs!

The joker is not usually linked with pride but with the flexibility and the independence that tattoos provide, there’s nothing that says it can’t be used in a different sense other than the symbolism that it is usually used for.

Tattoos like this let imagination do the job as they are created in a way that makes the joker stand atop others as it takes the place of the King or the Queen and entertains itself through the eyes of superiority and pride.

The tattoo is in a way, designed perfectly for prideful people who live their lives on their own accord and don’t let others interfere with their bright way of life. A tattoo design like this is a no-brainer as it will turn some heads!

This second tarot card entry on this list is simply too stunning to leave out as it nails the design with its amazingly drawn portrait of the fool or clown. Tattoos like this are visually stunning as they incorporate the essence of the ideals of the tarot and show the figure in a bright sense which, unlike the playing card joker, is more of a helpful personality.

If you are in the search of tattoos that will appeal to the art lover in love or in people around you, then this tattoo is something that you should absolutely get inked on your body!

Here are some recommendations to go with these tattoos: