10 Best Joestar Tattoo Ideas You Have To See To Believe! 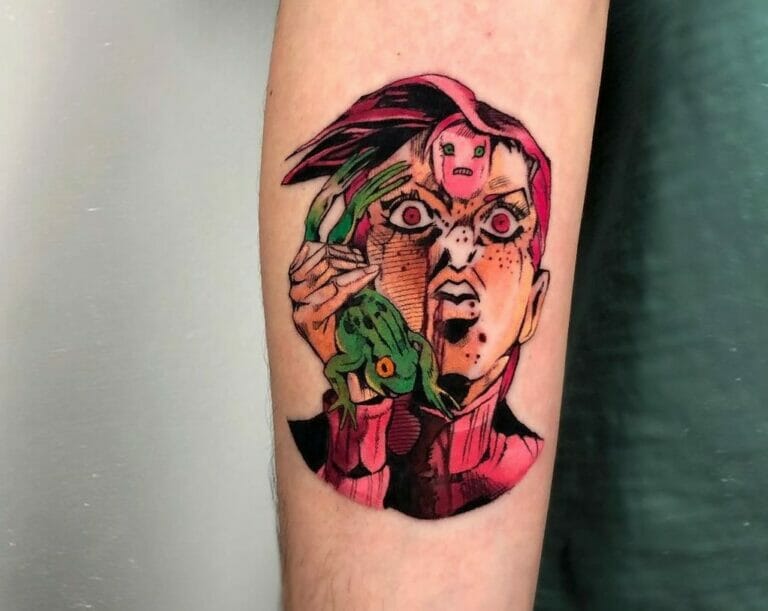 If you’re a huge fan of JoJo’s Bizarre Adventure and planning for some cool Jostar tattoos, we are here with a few inspirations that are definitely not ‘muda’.

With a series full of funny and unimaginably powerful characters, how can an otaku ever go wrong with a Joestar tattoo?

Anime series JoJo’s Bizarre Adventure came out back in 1993 and has subsequently gained mass popularity. Hardcore fans have ever since expressed their love for this manga series through posters, manga collections, and tattoos.

A journey through the generations of the Joestar family, this series features nine-story arcs with each revolving around a different JoJo. Each Joestar descendant carries a star-shaped birthmark on the back of their left shoulder. However, there are characters not belonging to the Joestar bloodline and yet have the birthmark. They usually ‘steal’ the birthmark, or in Dio’s (the traitor) case, he stole Jonathan’s body and passed it on to his descendants. In Stone Ocean, when Pucci unites with the Green Baby, he absorbs Dio’s bones, following which he too receives the Joestar birthmark. The Joestar series has a lot of protagonists and a ridiculously long and complex family tree, leaving fans divided between their favourite Joestar. Undoubtedly, however, each of them would give a huge nod to Jotaro Kujo, the iconic character in the entire series, as the strongest of all with his time-defying and super destructive powers. Contrastively, since we mentioned the strongest, can we please also mention that Jonathan, the first, is the weakest of all? For quite obvious reasons, Jonathan being the first stand user, there could have been no stand-to-stand competition for him making his stand, the weakest of all Joestars. JoJo’s Bizarre Adventure, with its ‘bizarrely’ long family line in a comparatively smaller plot, and various symbolisms, gives fans enormous options to express their love for the series through tattoos. Here are 10 of the best ideas for you to ink a Joestar tattoo on you:

While listing out Joestar tattoos, by default, the JoJo’s Bizarre Adventure Joestar family birthmark tattoo makes the first one on the list. Fans who want to show off their love for the series, but at the same time are not a big fan of complicated tattoos, can go for this birthmark tattoo on your back. You can also find yourself a temporary tattoo sticker as well like the one below.

Jotaru Kujo is almost everyone’s favourite character and the most powerful of all JoJos. His stoic and calm personality has won over millions of hearts. Jotaru, along with his Flash-like superpower is so far the strongest of the Joestar bloodline. If you want to become a member of the Jotaru Kujo club, you shouldn’t think twice and get this stunning tattoo.

Star Platinum is the Stand of Jotaru. It is Star Platinum who makes Jotaru the strongest and we bet you to find us a better duo, we’ll wait. If you’re into Jotaru and want a tattoo, you can also alternatively ink this tattoo like this on yourself and show off your adoration for this duo.

The natural Hamon user, Joseph Joestar is Jonathan Joestar’s grandson. Right from his first appearance, this Joestar won everyone’s hearts. Joseph Joestar is a cocky guy who is always ready to ‘run away’ and loves taunting his enemies. One of his signature moves is predicting what the enemy will do or say next. A typical fun guy, if you too are carefree like Joseph, do consider this tattoo next.

Despite not being a Joestar, Giorno Giovanna is the son of the infamous Dio Brando, which technically qualifies him as one. Even though he is the antagonist’s son, Giorno turned out to be a great guy and is adored by most. Giorno is a high-ranking gangster who, unlike his father, uses his powers for the greater good. If you got heart eyes for this handsome gangster, this tattoo is meant for you.

With his powerful, witty, and arrogant personality, Dio Brando is undeniably one of the best antagonists of all time. Dio was adopted by Goerge Joestar, making him Jonathan’s stepbrother. He has always been a bully to his step-siblings and worse? He stole Jonathan’s girlfriend’s first kiss. When Jonathan died, Dio even stole his body making the Joestar birthmark a thing for his bloodline as well. But hey! We do love a good bad guy, right? And if you have a thing for bad vampires like Dio, this tattoo is meant for you.

Josuke Higashikata, the love-child of Joseph Joestar is the protagonist of Diamond is Unbreakable. A quirky and easygoing sweetheart who would only break you apart if you hurt the ones he cares about. If this kind and carefree sweetheart is your favourite, pin on these tattoos to ink it the next time you visit your tattoo artist.

Did you seriously think we were going to leave this one out? JoJo’s ‘bizarre adventure’ was started by these arrows, which were cut out of an alien meteor consisting of deadly viruses that, upon contact, would either kill or grant her superpowers. Get this super cool arrow tattoo and become an official superpowered fan.

The classic menacing symbol from the series shows up on the screen every time things start getting intense. Getting a tattoo like this sign will show off your love for the series, at the same time, stay minimalistic.

If you want to stop beating around the bush and simply scream out your love and addiction to JoJo’s Bizarre Adventure Joestar family, just straight up tattoo the Japanese title of the series and let the non-anime watchers wonder.

We hope we’ve helped you enough with sorting out your next ink design but just in case you want to check out more, you can always search on Instagram using tags like #jojostattoo. Alternatively, you can also check out these suggestions: